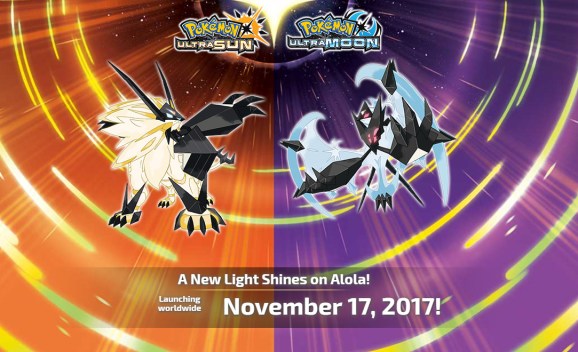 Nintendo Switch owners are not getting any version of Sun and Moon. They’re going to have to settle for Pokkén Tournament Deluxe for their Pokémon needs.

During a Nintendo Direct video stream today, the Japanese game company announced that Pokémon Ultra Sun and Ultra Moon are coming to the 3DS. These are updated versions of the Sun and Moon games, which came out for the portable last November and sold more than 15.44 million copies. The Ultra versions are releasing on November 17.

Many fans were hoping that Nintendo would announced a new version of Sun and Moon for the Switch. Part of that dream came true, but these updated takes on the newest Pokémon additions are sticking to the 3DS.

A brief listing was circulating around the internet that showed that a Switch version of Pokémon Ultra Sun and Moon was coming, with Nintendo announcing the release date at a later date. Nintendo has told GamesBeat that that was an error.

The Ultra versions will feature different Pokémon from the originals and new versions of its star monsters, Solgaleo and Lunala. It will use the same Polynesian setting as Sun and Moon but feature a new story. Nintendo says it will announce more info on the games later this year.

Nintendo often releases updated versions of a Pokémon game with some improvements and new features. This trend started with Pokémon Yellow, which followed Pokémon Red and Blue on the original Game Boy.

The main Pokémon games, which focus on role-playing game battles and collecting and training monsters, have always stuck to portable systems like the 3DS. The home consoles have had to make do with spinoffs like the fighting game Pokkén Tournament. Fans were hoping that since the Switch is a portable/home console hybrid we might get an updated version of Sun and Moon for it, but that isn’t happening … at least not yet.

Update, 8:34 a.m.: Nintendo told GamesBeat that Ultra Sun and Ultra Moon are not coming to the Switch despite a false listing on the Pokémon press site.