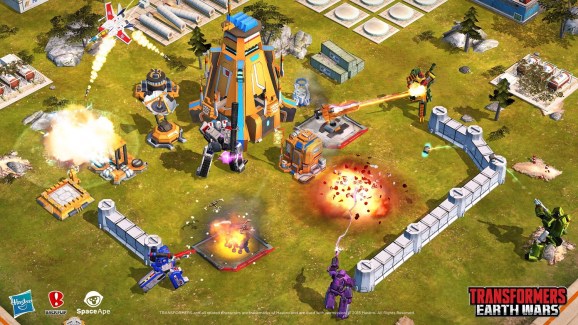 Transformers: Earth Wars is getting a new update that now makes putting together a team of Optimus Prime and Soundwave a reality.

There’s no disguising Transformers: Earth Wars’ success: The mobile real-time strategy game has more than 10 million downloads so far, and just in time for its one-year anniversary.

“Transformers: Earth Wars delivered a strong first year in an extremely competitive genre, especially when compared to the launches of similar IP-based titles such as Disney’s Star Wars: Commander—itself considered a major success—which managed about 16 million worldwide downloads in its first 12 months on the App Store and Google Play,” Nelson says. He also notes its numbers continue to grow: “Hasbro’s title continues to add approximately two million new players each quarter and is on track to do that again in Q2.”

Backflip has developed a number of popular casual games, such as NinJump, Paper Toss, and Dragonvale. In 2013, it became a subsidiary of Hasbro, and last year, the studio teamed up with the Space Ape Games studio to publish Transformers: Earth Wars. Backflip reportedly has 33 million monthly active users across all its games, including numbers from its first Hasbro launch, 2015’s G.I. Joe: Strike.

Earth Wars features Clash of Clans-esque gameplay, with players curating which characters they want to use in battle, building up their bases, and raiding enemy camps. Space Ape has flirted with the genre before with previous titles Rival Kingdoms and Samurai Seige, both also mobile RTSes. According to TechCrunch, it frequently drew comparisons to Clash of Clans developer Supercell — that is, until the two joined forces when Supercell acquired 62 percent of the studio last month.

A contributing factor to Earth Wars’ success can be chalked up Space Ape’s capability to engage with their community and execute on live events. In an interview with GamesBeat in March, Space Ape’s chief operating officer Simon Hade said, “One thing we’re very proud of — we talk about live ops being a strong suit of the studio. Each game we’ve made, we’ve brought the thinking about live ops earlier into it.”

In addition to limited-time challenges on weekends, Earth Wars has been leveraging Hasbro’s rich IP, expanding the roster of available characters, drawing on spin-offs such as Beast Wars and featuring Combiner super-robots. “We’ve more than doubled the number of Transformers in the game since launch,” says Chris White, product owner at Space Ape, in a highlights video on June 1.

Hasbro has been gearing up for Transformers: The Last Knight, which hits theaters June 21. In addition to extra content in Earth Wars, it’s planning on releasing virtual reality and augmented reality experiences in China later this year.