Televised esports took a step into mixed reality with the recent Street Fighter V Invitational event. The broadcast by Turner-IMG’s ELeague, Ross Video, and the Future Group showed characters from the game injected into the TV show in real time.

As esports commentators talked about the matches, the Future Group used its technology to created a mixed reality scene, where it inserted animated characters into a live broadcast to enhance the audience experience. We’re talking real time, not post-production as we’ve seen in the past. Characters from the game struck fighting poses and loomed over the broadcasters during the show, said Bård-Anders Kasin, CEO of Norway-based The Future Group in an interview with GamesBeat. He said it shows the versatility of the technology, which can be used to create everything from real-time mixed reality experiences to interactive game shows.

“We took the characters from the game and made them become real in the studio,” Kasin said. “We are extremely happy with the results.”

The Future Group’s graphical rendering platform, Frontier, which is based on Unreal engine, brought Street Fighter’s legendary characters to life in the G Fuel Eleague arena and was shown in real-time to TBS viewers at home.

The technology showcased and the signature characters associated with the game. 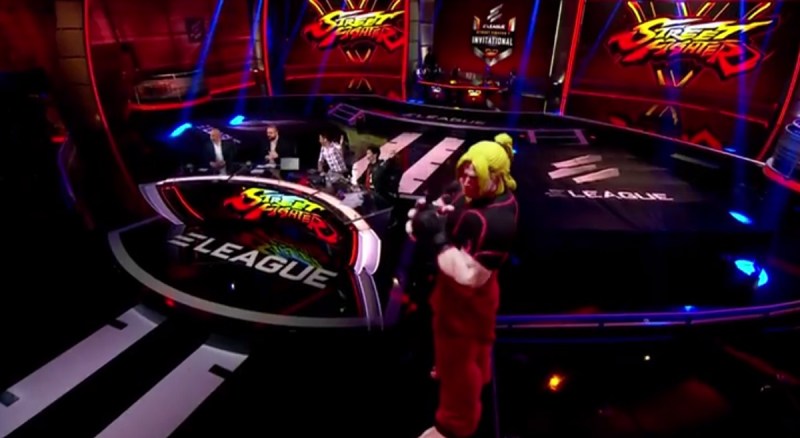 Above: Street Fight V characters rendered by the Future Group.

“It brought the characters out of the game and into the real world,” said Zach Bel at Turner Studios. “It was an amazing moment for everyone. Working creatively with The Future Group has been a fantastic experience and one that has led our creative workflows to places we didn’t even think possible. The Future Group and Ross Video´s collaboration has given the industry a game-changer in how we create real-time VFX and storytelling. We look forward to exploring what this exciting new technology can do next.”

The Future Group is using the same technology in the Norwegian game show, Lost in Time, where contestants in a game show act out a competition in front of a green screen in a TV studio. Their video is then superimposed into an animated virtual world full of castle mazes, runaway mine carts, and dinosaurs. In that game show, the audience at home can play along in the same competitions using a mobile app.

Kasin said the work with the Street Fighter V project took a couple of months of work. Over time, the company will do more projects like this one.