We’re all familiar with QVC and the Home Shopping Network (HSN) — you know, when you see something on TV you want and dial the 1 (800) number to make the impulse buy? But using an app is so much more convenient for us millennials. This led Eric Feng, a partner at Kleiner Perkins Caufield & Byers (KPCB) and Hulu’s former CTO, to launch Packagd: a family of apps that allow viewers to buy what they see on selected YouTube channels. The startup comes out of stealth today and announced a $7.5 million investment from KPCB, Forerunner Ventures, and GV.

Rather than search for hosts and produce new videos, Feng is banking on the hundreds of millions of YouTube channels that are already established with a solid following. “Video content has a very long shelf life,” said Feng in an interview with VentureBeat. “Not like news.”

Packagd’s first app, baptized Unboxed, taps into the community of YouTubers who share product reviews, how-to videos, and more, with a focus on tech products like laptops and smartphones. The audience can also interact with the hosts and the rest of the viewers through a dedicated chat. “It’s basically the new CNET for the online video community,” said Feng. 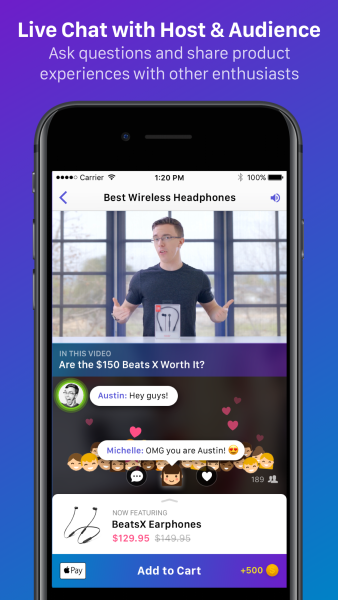 With approximately 10 billion unboxing video views a month worldwide, finding viewers won’t be an issue. And on whether these viewers are inclined to buy: Google found that 62 percent of people who watch unboxing videos are researching a potential purchase.

Packagd has partnered with BestBuy, but occasionally lists Amazon as an alternative marketplace. Viewers make their purchases with Apple Pay, and the YouTube hosts get 100 percent of the affiliate revenue, according to Feng. The startup plans on monetizing by allocating specific time slots to interested brands. If Bose wants to feature some of its products on the Unboxed app, for example, the brand could request a weekly time slot, either relying on YouTubers to sell its products or choosing to produce the video in-house. In the long run, Packagd also wants to sell certain products directly, acting as a sort of boutique shop for more specific products, like drones.

Although Feng doesn’t consider Facebook a direct competitor, the social network has experimented with commerce on its platforms, be it through its Facebook Marketplace or via Instagram, which redirects users to the sponsored post’s website. Amazon threatened to be a more direct competitor when it launched its Style Code Live show last March, which allowed viewers to buy products the host discussed directly from Amazon. The Seattle-based giant just announced last week, however, that it is canceling the show. Packagd is therefore swooping in at an opportune moment.

The San Francisco-based startup was incubated for several months at KPCB, which then led its $1.5 million seed round earlier this year. Feng, who was the lead investor, said that he basically pitched the startup to himself. When I asked whether there was a conflict of interest, he referred to John Doerr’s famous saying: “No conflict, no interest.” More seriously, however, Feng claims that he has no equity in Packagd. He adds that his dual role is probably scalable for the next six months, at which point he will be looking for a new Packagd CEO.

This is also why Feng looked for outside investors to lead Packagd’s series A round of $6 million, in which KPCB did not participate. The fresh capital will be used to publicly launch the Unboxed app and start working on two new apps — one for beauty and one for toys (think Ryan ToysReview).

Founded in 2016, Packagd currently has 6 employees.