Epic Games announced that Fortnite, its third-person shooter “action building” game, will be available in paid early access for PlayStation 4, Xbox One, PC, and Mac starting on July 25. Youcan preorder or preregister now on the official website.

In Fortnite, players team up to build massive forts and battle against hordes of zombies, all while crafting and grabbing loot within big open environments where no encounter will be the same. I’ve been playing the alpha version of the game for more than a week, and it’s a unique and funny experience. At least it is as funny as you can make the zombie apocalypse. It’s a nice blend of the building fun of Minecraft, the realistic but stylized graphics of Unreal games, and amusing shooters like Team Fortress 2.

“Fortnite has come into its own. It’s ready,” said Donald Mustard, creative director at Epic Games, in an interview with GamesBeat. “We’re ready to begin operating it at a large scale.”

A long road to free to play 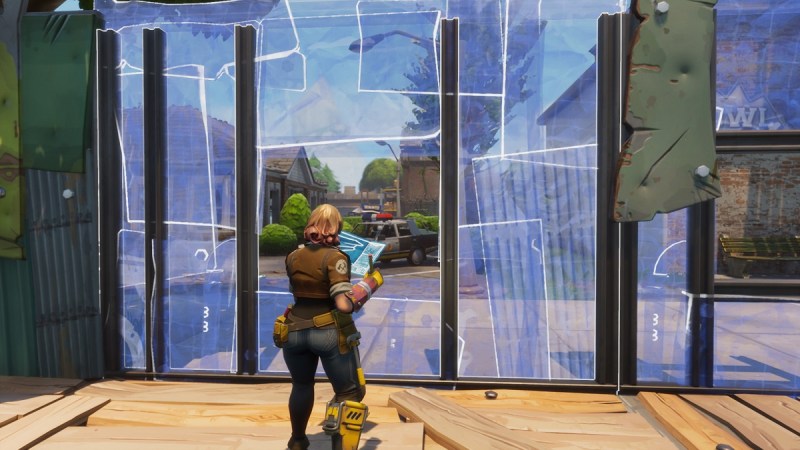 During the production cycle of the past five years, Epic has grown up as well. Back then, it had about 100 people, and it was making one game at a time. This year, it has six games in deep development and more than 500 people.

“Fortnite has been the tip of the spear the entire time. When we started prototyping it, it was on Unreal Engine 3,” said Mustard. “As we realized our ambitions for the game, and our hopes for the game, we knew we didn’t have the technology to make that yet. We needed to make a new engine not just to service the future, but that could showcase what we wanted to do with this game – to make these dynamic worlds, fully destructible, randomly generated. These were massive things that we needed new technology to do. Fortnite paved the way for that, and for our live operations back end.”

While Fornite is free-to-play in the long run (when it formally launches in 2018), but in the meantime Epic will sell Fortnite Founders Packs to give players entry to the Early Access Season, access to exclusive in-game events in 2017, and access to Heroes, loot, weapons, and in-game boosts. So if you want to play it early, you’ll have to pay.

Players who order a Founder’s Pack will get a four-day head start beginning on July 21, along with the exclusive Storm Master Weapon Pack. Additionally, Epic Games has partnered with Gearbox Publishing to distribute a boxed retail version of the game for PlayStation 4 and Xbox One.

Fornite is a cooperative or solo “action building” game where you gather resources, craft materials, build giant forts, and defend them. Anything in the world can be used to mine resources. You can use your miner’s pick to dismantle rocks, cars, trees, homes, benches, and whatnot to get the basic wood, rocks, or metal to craft ammunition, walls, stairs, floors, and other things.

I got a certain joy out of destroying cars, which honk their car alarms when you hit them, and chopping down trees within a few seconds. There’s a big “klang” sound when you take a whack at the metal objects. The game brings out the deconstructionist in you.

The game is full of dynamic events and procedurally generated items. The loot will never be in the same place twice. You have to deal with storms, monsters, survivors, and different kinds of terrain. You might, for instance, have to build some wooden stairs to scale a small cliff.

The story is mercifully brief. A storm came without warning, with a strong and powerful evil, and it wiped out 98 percent of the world’s population. You start out with a hero character, one of many that you can collect along the way. You can customize your name and your fort name. Then you get a home base to build and defend. At the very start, the tutorial teaches you how to build things. 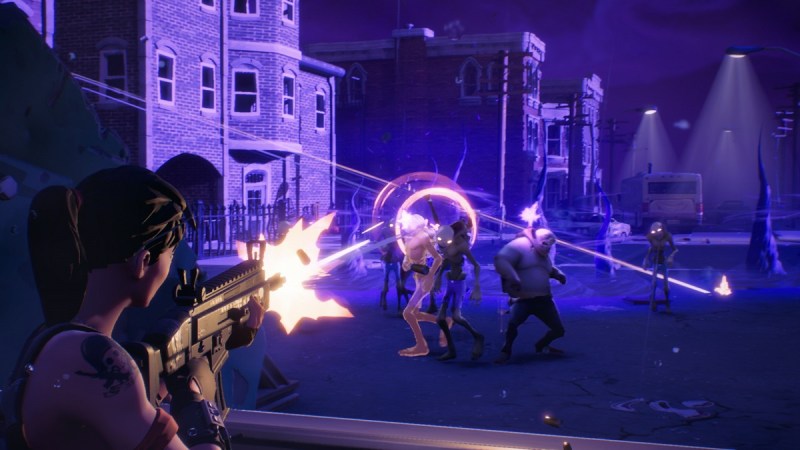 It’s really simple. On a PC, you just hit the F1 or F2 keys to go into build mode. Then you construct a wall or floor, and it self-assembles. If you have enough resources, you can keep on building a perimeter around your base. And when you’re done, you can add stairs and a ceiling so you can defend from a height advantage. In the tutorial, the zombies attack from one direction and you have to take them out before they get to your home base and destroy it.

The fun part is learning how to lay fields of fire and traps. You can build a pathway for the zombies to follow, and then put floor, ceiling, or wall traps to zap them as they attack your fort. For those that get through, you can use your pick ax, samurai katana, pistol, or assault rifle. Over time, you can level these weapons up and acquire new ones as well.

I crafted hundreds of bullets, which come in the form of heavy, medium, or light bullets. You can build shotgun shells too. But I always seemed to run out of them, no matter how many bullets I built and no matter how many cars I destroyed to get metal.

It’s like Minecraft, with shooting, for sure. Ultimately, though, you’re building with a purpose.

“It’s building with a purpose. That’s the core of what’s fun about Fortnite,” said Zak Phelps, executive producer, in an interview. “The initial modes, some of the initial gameplay we showed two years ago, that had some smaller bases, and that’s what we showed in the demo today. But those large bases are something that—we’d gotten feedback very early on that that was something players were very excited about. We wanted to make sure to find a way to enable that.” 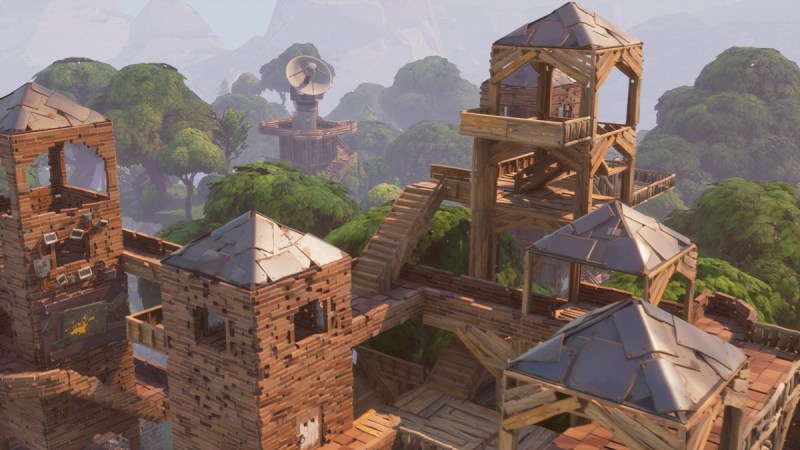 Above: It won’t be easy to build forts like this in Fortnite.

In addition, you have to find BluGlo, a fuel resource, at various places in the large maps. If you find enough, you can undertake missions such as launching a satellite. Once you find a device like that, you add fuel, and then build a fort around it. Once you are ready, you activate a timer. Then you have to defend that location until the timer expires. You can take great joy in shooting a propane tank and blowing up a bunch of husks all at once.

When the Husks attack, they come in different forms. Some are just dumb grunts. Others throw baseballs at you, and still others are tank-like. You have to choose the right weapon, and resort to your katana when you run out of ammo. If the husks tear down a wall, you can shoot them and rebuild it. That causes a delay for them in breaking through, and it buys you time.

“The ability to craft items on the fly is part of the fun,” said Zak Phelps, executive producer, in an interview.

You can team up with friends and talk to each other on Discord voice-chat channels. I’ve really enjoyed my time with Fortnite, and I look forward to playing it in co-op mode as more people come into the beta testing.

The game is massive. Outposts can have more than 3,000 pieces built into them. Epic’s Mustard said there are more than 100 heroes in the game and more than 300 hours of gameplay. That’s a lot of Husks to trap, shoot, zap, blast, slash, burn, and pickaxe. 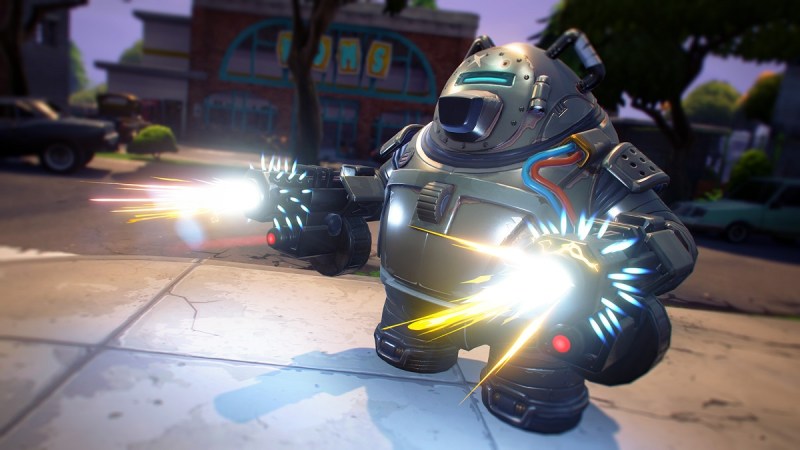 Above: A Bear defender in Fortnite.