Crowdfunding isn’t fatigued — it’s growing up. For years platforms like Kickstarter have made it possible for projects to be funded directly by friends, fans, and other communities. In return those backers often received rewards, a token that symbolizes their generosity and belief in the project. The backers of crowdfunded projects also assume a lot of risk, sometimes losing all their money in exchange for nothing if a successful crowdfunding campaign project is later cancelled. But even as some crowdfunded projects have gone on to become hugely successful products, would-be future backers are starting to realize that their early contributions could be investments.

Imagine if you could pool all the potential money that could be raised through crowdfunding. It’s more or less a finite resource because, understandably, most folks will only ever give so much of their own money away. So as the number of crowdfunded projects pile on, this pool slowly begins to drain. The problem with crowdfunding is a sustainability problem.

Emerging from the decline of crowdfunding is the prospect of “crowdpublishing.” Loosely defined, it’s where fans of projects also get the option to become investors, choosing the projects they want to support, much like traditional publishers, and then sharing in the revenues from market performance. And while the risk is still there if a project were to later be cancelled, the reward potential far outweighs the token promises of a typical crowdfunded campaign. This process also allows for new funds to be reintroduced into the crowdfunding pool.

The video game industry is ahead of the curve

There’s no denying the stomach-churning drop in the amount of money pledged on Kickstarter for video game projects in 2016. Last year’s haul of $16.2 million was down 61 percent from the year before, a five-year low for the video games category. An  analysis from Thomas Bidaux of ICO Partners attributed the decline to the absence of large video game projects on the platform.

So what is going on here?

Two examples of current Kickstarter projects that may prove to be the proverbial canaries in the coal mine for the impending industry wide change are Apocalypse Now and Banner Saga 3. Both of these titles have a lot going for them: each has a highly experienced development team, proven franchises, gorgeous artwork and seriously fan-approved gameplay.

With Apocalypse Now, the campaign had the added benefit of being featured on the front page of Kickstarter, along with full endorsement from the movie’s legendary director, Francis Ford Coppola. Three weeks into the anemic campaign, developers pulled the plug on Feb. 14, opting instead to appeal directly to investors.

And the campaign for Banner Saga 3, while successfully completed, raised a little under $417,000—about 42 percent less than what its developer, Stoic, raised five years ago for the original Banner Saga.

The steep decline of funding on Kickstarter, along with the recent struggles of these two top tier titles, underscores the change in the relationship between fans and the titles. While previously it was enough for fans to receive a token of appreciation from the game developers – like early access, a copy of the game, or in-game perks – now that this model of fundraising has proved successful, fans want in on the real rewards: revenue.

The Jumpstart Our Business Act, or JOBS Act, changed everything

Until recently, this option wasn’t open to average game fans. You had to be a relatively wealthy investor who had met the accreditation requirements of the Securities and Exchange Commission. However in 2012 this changed with the Jumpstart Our Business Act, or JOBS Act. Now, average investors can also participate in what’s known as equity crowdfunding under two new provisions enabled by the JOBS Act — Regulation CF and Regulation A+. Regulation CF only lets entrepreneurs raise up to $1 million in equity financing in a 12-month period, while Regulation A+ allows startups to raise up to $50 million.

SeedInvest and Indiegogo have jumped on the bandwagon of equity crowdfunding, and the studios making some games, like Crowfall, are successfully taking the route of offering preferred equity in exchange for funds. My company, Fig, is a prominent proponent of a similar yet unique model we call crowdpublishing, with games like Pillars of Eternity 2: Deadfire and Psychonauts 2 succeeding on the platform. While under equity crowdfunding a stake in the studio is a compelling offer if there were to be a studio acquisition or IPO, crowdpublishing offers the opportunity for investors to get returns based on the game’s revenue stream while developers maintain 100% ownership of their intellectual property and studio equity..

For developers and independent studios, equity crowdfunding, especially under Regulation A+, can be a game changer. By allowing non-accredited investors to now participate, it opens the door to a much vaster pool of investors and introduces sustainability into the crowdfunding ecosystem. It also provides entertainment properties a way to harness the potential of the crowd who is most passionate about their properties — fan investors.

This is the heart of crowdpublishing, where fans select the titles they want to back, just like old-school publishers. They also have a financial incentive to help test out early builds, give feedback, and get the word out to fuel further funding and commercial launch efforts.

An internal analysis of our data at Fig demonstrates a surreal appetite among fans to financially invest in the games they love. In 2016, the average investment reservation on our platform was $2,800—roughly 44 times the average reward pledge of $63.64. Overall, 59 percent of total pledges last year were for our Fig Game Shares equity channel – meaning fans would have the opportunity to earn back their money and then some, based on the commercial performance of the video game. 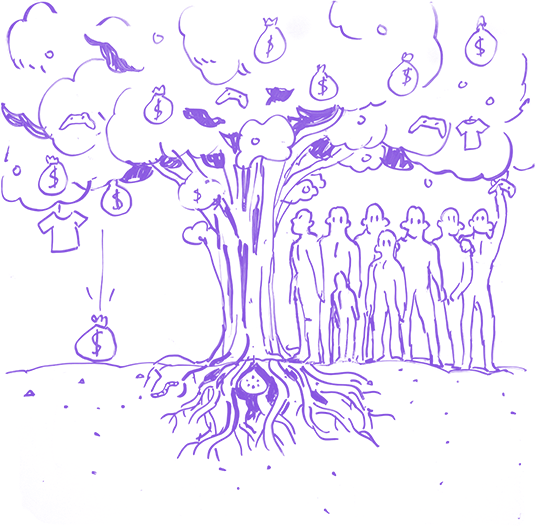 Crowdfunding is simply growing up

Crowdfunding is on course to change from the “kickstart” model: a one-time tapping into the goodwill of a community for the purpose of collecting donations in order to get a passion project off the ground. It’s possible that what we’re seeing on Kickstarter is that the goodwill is less effusive the second or third time around, as fans begin to question why they can’t share in the financial rewards. Or that pledgers feel less inclined to donate to projects that are already backed by well-heeled resources.

On the other hand, crowdpublishing also opens crowdfunding up to other participants, including large media companies and intellectual property rights holders who own properties with a passionate community following. Think about Alpha Centauri, Okami, or any number of titles from the LucasArts archives. These and others have audiences clamoring for more content, but the publishing and licensing for the traditional approach doesn’t work for the publishers who own the rights, and so they never see the light of day. But with fan financing support and their help generating awareness and promoting the titles, they could! So finally these kinds of projects can have an opportunity to come to life.

The implications of crowdpublishing are far reaching

Looking even further, crowdpublishing is also ripe for other entertainment verticals, including  movies, television, books, music, and more. What if fans of the cancelled and cult-favorite sci-fi series Firefly could get the financial resources together to greenlight a new season? Would the incentive of knowing that they could share in the profits of success be enough to entice them to pool their money to make it happen?

It’s not as crazy as it sounds. For example, even though the television show Veronica Mars was cut short after three seasons by the CW due to mediocre ratings, in 2014 a crowdfunding campaign for a film version more than doubled its fundraising goal of $2 million within a mere 10 hours. More recently, the makers of Super Troopers raised over $5.7 million from fans after studios pulled funding for a sequel, and the film is currently in production.

In both these instances, devoted fans pooled their resources just for the satisfaction of seeing their dream movies get made and to collect rewards ranging from a DVDs to signed t-shirts. Imagine the potential investment power if fans knew they could also recoup a share of box office sales too? Money that can grow and be funded back into the system to not only fund properties with existing fan bases, but to help finance new talent.

This isn’t the end of crowdfunding. It’s just the beginning.

Justin Bailey is the President and CEO of Fig and has been active in the video game industry for many years, having published a wide variety of free-to-play, premium and mobile games.