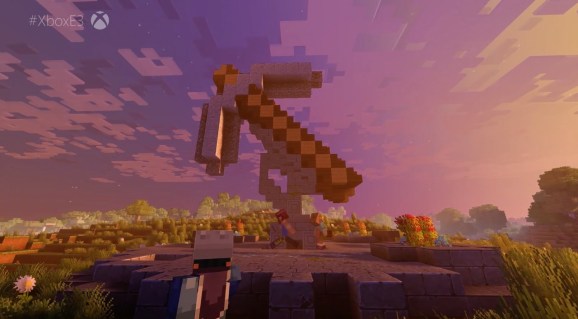 Minecraft in 4K on Xbox One X.

Microsoft has spent the last couple of years talking about bringing Minecraft fans together no matter how they’re playing, and now the publisher is finally getting ready to put that plan into action … but without the PlayStation 4.

Minecraft’s Xbox One, Nintendo Switch, Windows 10, and mobile versions are all coming together into one game called simply Minecraft (no more Minecraft: Xbox One Edition or whatever). This enables you to start a game on one platform and then pick up that world and save on any of the others that are part of this unification under the “Bedrock Engine.” This also means someone on Switch can play with someone on an iPhone or Xbox One, and your purchases in the game even carry over from one device to the other.

But none of these new cross-platform features will work on PlayStation 4.

I’ve asked Sony if it refused Microsoft’s offer to enable cross-platform support on the PS4 version of Minecraft, and I’ll update this story with any new information. What is clear, however, is that Microsoft isn’t trying to lock the other platforms out. After all, Nintendo agreed to this, and Microsoft brought the recent Switch release into the unification.

When I asked Microsoft about why PS4 wasn’t included, a company spokesperson made it sound like that was up to Sony.

“We can’t speak for Sony,” Minecraft communications boss Aubrey Norris told GamesBeat. “But as we said, we would love to have our PlayStation 4 community join our Minecraft unification plans.”

If Sony is refusing, we don’t know why. The publisher might want to force players to buy the game on PS4 to play with their friends on that platform, or it may not like the idea of unlocking paid downloadable content for someone who bought a skin pack on the Xbox One.

Whatever the thinking, though, the result is that PS4 players are getting left out of what is the future of Minecraft.