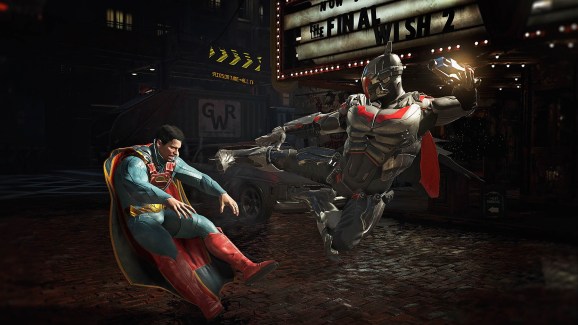 Something something Batman has no powers.

Injustice 2 is a fighting game from NetherRealm Studios and features popular characters like Batman, Superman, and Wonder Woman from the DC comic book world. It’s a sequel to the original Injustice: Gods Among Us, which was a huge hit. It topped the charts when it was released in April 2013. Even folks who aren’t DC fans can appreciate Injustice’s high production values and cutting-edge graphics.

The biggest esports tournaments usually focus on multiplayer online battle arena games like Dota 2 and League of Legends or shooters like Counter-Strike: Global Offensive. However, there is a dedicated community around competitive fighters, such as the iconic Evolution Championship Series (Evo), which gives the spotlight to games like Super Smash Bros. Melee, Tekken 7, and Street Fighter V, which was aired on ESPN2 last year. Warner Bros. has also experimented in the fighter esports space as well with its Mortal Kombat tournament. Capcom and Warner Bros. are both heavy hitters in their genre, and they’re jostling for part of the revenue in an industry that’s projected to reach $1.5 billion by 2020.

The Eleague Injustice 2 World Championship will start on Oct. 21 with an open qualifier, and the grand prize up for grabs is $250,000. It can be seen on TBS. Eleague was formed by a partnership between Turner, a Time Warner subsidiary, and International Management Group (IMG), which is a sports, talent, and events management company. It started as a Counter-Strike: Global Offensive league, but has since hosted tournaments for other games like Street Fighter V and Overwatch.