Above: PWND is about showing your dominance.

GamesBeat: When you teamed with David Ellison, did you have both of these ideas? How far along were they?

Akemann: PWND had been cooking for some time. Archangel was born pretty much with the company, with Skydance Interactive. We had done some giant mech stuff before. We created a sort of steampunk mech game back in our early workshop days, called Ironclad. I didn’t call it steampunk at the time. I called it Victorian sci-fi. But it was this game about driving a three-story iron steam-powered battlemech in the 19th century, fending off the invaders from Mars, smashing the shit out of Victorian London.

So we had some mech on our brain before that, some original control schemes. We did a ton of motion control. We made Sorcery for PlayStation using the Move controller. It was the biggest game they did for Move. It probably showed up a little too late. We had a lot of ideas about control infrastructure, but Archangel itself was original, born right then.

GamesBeat: As you’re going into this, do you view yourselves more as triple-A or indie?

Akemann: Well, triple-A talks about a budget scale that nobody can yet justify on VR. I don’t want to make that claim myself. I’d rather somebody in the press say it, if they believe we’ve achieved that. But that would certainly be my goal, to be triple-A for VR, for what that is. That’s a budget level that is still possible for a new player to jump right in. If you’re jumping into console you’re talking about a mountain you have to climb. Here, it’s a great new territory.

It’s not just budgets. It’s that there’s an open field. VR is a brand new space. It’s only just now that real game companies are starting to take it seriously. By jumping ahead of that and being willing to bet big and bet confidently on this thing from the beginning, that’s given us a chance to be part of telling the next chapter of the gaming story. I couldn’t turn that down, as a developer.

I think we’re somewhere in between. PWND, obviously, we’re not one of the biggest budget shooter companies. We’re also a new company in terms of the gaming space. We’ll build our way up. We definitely come from a triple-A background. Everything we worked on as a workshop for years was of that nature. We’re bringing a triple-A sensibility and developers who know how to do that to this smaller space. I think we’ll build up our reputation. I expect to be there in a few years. 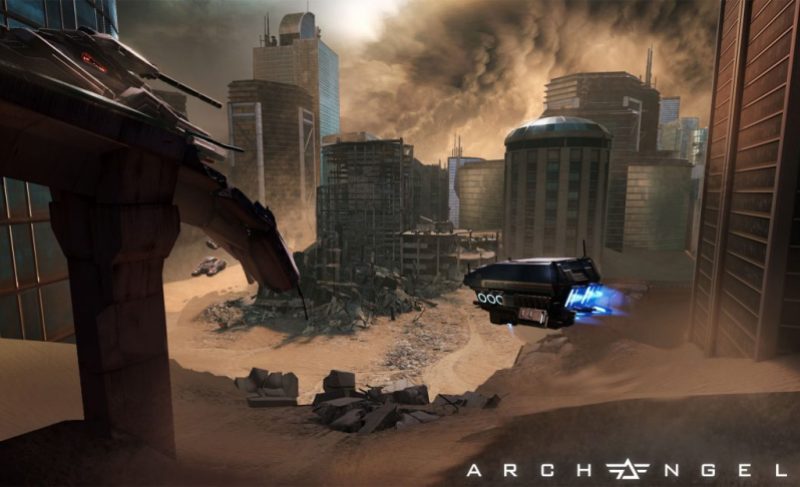 Above: Archangel starts out with a stealth mission.

GamesBeat: Are you thinking about mobile at all, or is that outside of what you do?

Akemann: It’s not on our immediate radar. If the right idea comes in the door—we believe in VR. We’re obviously doing more than VR. The world is our oyster. We control our own destiny. If the right idea came in sideways we could definitely look at it. But it hasn’t been our core strength as developers, historically. It wouldn’t be the first place I’d look.

GamesBeat: Are you thinking about any movie IP?

Akemann: It was extremely important to us, at the outset especially, to establish that Skydance Interactive was going to be a source of original gaming content – to make the statement that Skydance views gaming as an authentic, viable commercial and creative medium in its own right. Not something ancillary to the film and TV business. It reboots the way a lot of people look at Hollywood and video games, what you expect when a movie studio comes in and decides to make games, where it’s obviously derivative.

Notice that our first two games are both original games, not tied to any properties. All that said, we’d be fools to ignore some of the great properties that Skydance is in. Many of them are tied to broad worlds with ample opportunities for making video games out of them. World War Z, Mission Impossible, Star Trek, Reacher, Terminator. I’d be a blind man if I didn’t see the opportunities in those things. I guarantee we’ll be making use of that in the future. But it was important that our opening statement was, “Games are a thing in their own right. They’ll stand alone. We’ll have IP generated from games. We might be making movies or TV from our game IP in the same way.”

GamesBeat: You’re about 90 people. Do you see that as your full-grown studio?

Akemann: We’re at a good size for our current target. We want to prove we can operate and succeed at this level. I don’t think we’re going to get a lot bigger. There will be some growth. A steady state is very hard to achieve in game development. Needs always fluctuate. But I think this is going to get us to a point where we can get a couple of games out each year. That’ll be a good cadence for us.

We established ourselves with our initial work that’s out there and we’ll grow over time. I’d love to grow into a titan. [laughs] But I think we want to get our legs first and make sure we’re successful with the hand that’s been dealt us. We’ll earn our right to do big things by doing little things well. Well, I wouldn’t call either of these little things, but maybe medium-sized.

GamesBeat: You have a few notable actors in Archangel. Is that thanks to connections through the rest of the company?

Akemann: Absolutely. We were able to partner with Digital Domain to build the VR interactive cinematics that bookend the story, as well as interleaved cinematic moments throughout. That was a great opportunity to add a human dimension to the game. You’re playing it from more than just a cockpit. You need a chance to connect with the people behind the story, and so we do that. At the beginning you’re outside of the mech. It has the sensibilities I was talking about – Skydance’s passion for world-building and storytelling, as well as their connections to be able to pull someone like DD in the door to partner with. We made sure we’re delivering a game that’s got that kind of rich, full-bodied, end-to-end treatment. If someone has a shot at going for triple-A VR, that’s what we’re aiming for. I feel like that’s something only Skydance could have, or would have, pulled off. 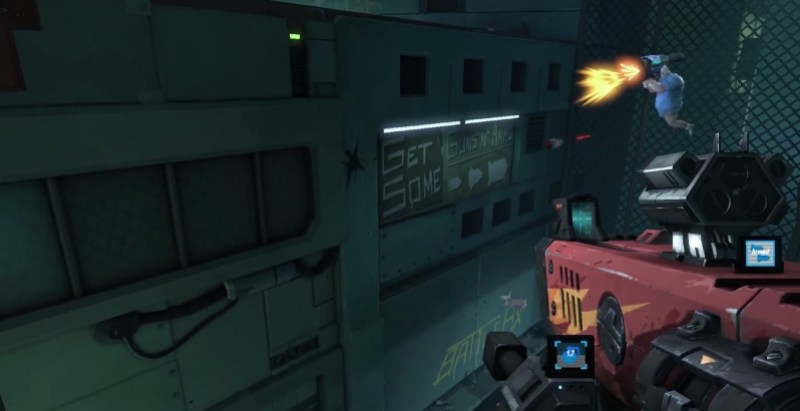 Above: PWND has a lot of corridor fighting.

GamesBeat: It’s interesting to see confidence in the game industry, starting up a brand new thing and expecting it’ll do well.

Akemann: David himself is about as big a gamer as you can get. That certainly helps. He’s playing all the time. He’s very good. He understands it from a consumer level just fine. He skips cutscenes too, by the way. When they’re not any good, when they’re not tied to the action and moving things forward.

It’s an opportunity. VR was definitely an open door, believing that the VR market—obviously the big players aren’t there yet. It’s not really on their radar. It’s not the thing that gets the Activisions and EAs of the world into it, other than ancillary little test projects. As far as really investing in VR, that’s indie-land right now. We jumped in on it a year ago seriously. It was a bet that it was going to grow.

Now, it’s not going to grow fast. We all know the barriers that are there. The technological barriers are high. It’s all still first-gen products. The basic user experience is not commoditized at all yet. It’s going to take a longer time than we thought just to get the hardware out there. Even the way information spreads these days—it’s not something you can easily spread on the internet, what it is and what it’s worth. The software has to come in to justify it. A platform without compelling applications that you can only get there is never going to fly. It’s a chicken and egg problem. A lot has to go right.

But we’ve all put our hands on the controls. We’ve felt the magic of it. We can see that there is absolutely a viable, original, novel gaming landscape to be drawn there. It takes companies like ours that have the resources and the confidence to see far enough ahead and say, “Yeah, that’s going to go. This year? I don’t know. Two years from now? I don’t know. Five years from now? Yeah.” We’re willing to jump in and play that game. That’ll give us a unique position.

The Skydance Interactive story is a great story. It’s a great story for VR — VR needs this – and for the industry generally. I hope we can lead people to rethink how they see the landscape.

GamesBeat: Just as people see downward cycles, we need to see upward cycles as well. Disney retreats from games and then NBC Universal hires all of their people.

Akemann: Right. Games aren’t going away. It’s just easy to get it wrong sometimes. We have to prove we’ve got it right. I’m not going to go out there acting like we’ve already got it. We have to earn our stripes like anybody else. But I feel very confident that we have the right team in place at every level – development-wise, executive-wise – that’s going to give us a shot that few other people ever get. We’re going to make the most of it and I think we’re going to succeed.