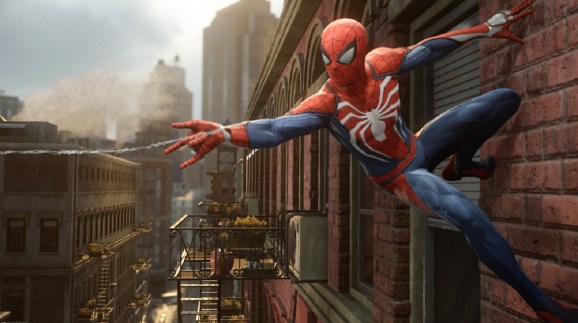 Insomniac is working on a Spider-Man game. I have scores of issues of Spider-Man comic books

Sony revealed more of Insomniac’s Spider-Man game at its Electronic Entertainment Expo (E3) today. The game actually had the honor of closing Sony’s show. It is coming out sometime in 2018 for the PlayStation 4.

The trailer showed Spider-Man taking out some goons at a construction site. He stealthily jumped through the area, using his webs to take out enemies and quickly zip around. He also fought a group of baddies using his web abilities and acrobatic moves. He then received a call from Kingpin, a famous criminal mastermind from the comics.

The whole demo mixed action with cinematic moments and — yes — included some quick-time events. But seeing Spider-Man chase a helicopter across New York while swinging through the cities was definitely the highlight.

Then, after a closing montage, Sony showed just a little of Spider-Man without the mask. Two onlookers were taking pics of the aftermath of Spider’s antics. One ran off while calling for the other, Miles, to follow. Miles Morales is the name of the young African-American boy who took over the Spider-Man mantle in an alternate universe of Mavel’s called the Ultimate Universe.

Previously, Insomniac has worked on the Ratchet & Clank platformer series and the open-world game Sunset Overdrive. Sony announced that the studio was working on a Spider-Man game exclusively for the PlayStation 4 at last year’s E3.

Spider-Man has had a long history with gaming, but many consider 2004’s Spider-Man 2 to be the best because of its fun web-swinging mechanics. Many Spider-Man games have players exploring an open-world version of New York City, a tradition Insomniac’s take on the web-crawler will continue.