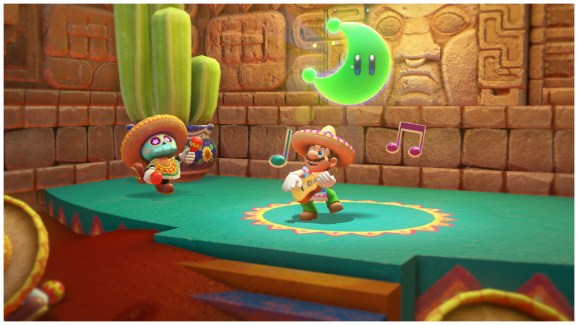 Nintendo debuted a new trailer for Super Mario Odyssey for the Switch during its media presentation just before the doors opened at the Electronic Entertainment Expo tradeshow in Los Angeles. And just like in his game, Mario is taking over the minds of everyone at E3 and watching it at home.

The new trailer opens with a T-rex and Mario possessing its soul, and I can’t even handle it. The video then breaks into a jazzy original tune about 1UP boys and girls, and I can’t stop listening to it.  And fans have spent the last 24 hours flooding the internet with memes about Mario, his god-like power to inhabit creatures, and his true love (Bowser).

Check out the trailer once again for yourself, and then let’s look at some of these good, good memes:

Super Mario Odyssey, which debuts in October for Switch, is all about Mario using a magical hat called “Cappy” to get into the minds of creatures he wants to become. A lot of times the hat looks like Mario’s standard red accessory, but he can also get a giant top-hat version that makes him look like he is peacocking.

Not sure about this new Mystery Mario form pic.twitter.com/W0nU3PiPDc

Mario isn’t the only one with new digs. Peach and Bowser also are wearing wedding whites, and all three characters are getting new Amiibo interactive toy figures with that clothing. Only it looks like Mario is actually longing for someone other than Peach.

Your soul is mine

Mario’s new power in Odyssey is horrifying and against god. He should be punished.

How I'll remember E3 2017: 80 different videos of people getting stabbed in the neck, then Mario became a T-Rex pic.twitter.com/gBNSol3Lg6

Can we talk about this whole Mario thing? pic.twitter.com/VduTvlSQMq

This is the most important thing about Super Mario Odyssey @Hbomberguy pic.twitter.com/uB4ANeiz0v

Mario: I AM A GOD — I INHABIT ALL BEINGS pic.twitter.com/YLvQ7tGEnQ

Nintendo is also digging into forgotten Mario games for inspiration. The aforementioned song has lyrics about “wacky worlds,” which is potentially a reference to the canceled CDi game Mario: Wacky Worlds that had Mario traveling to different places on Earth — just like Odyssey.

Those maniacs actually did it. And they even told us. pic.twitter.com/wWOIZSdAZP

And then there are the costumes.

Got more memes? Send ’em to me on Twitter: @jeffgrubb.