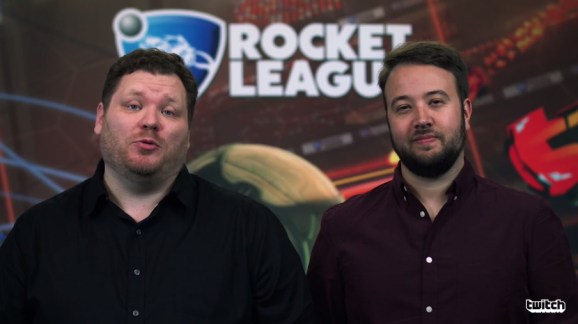 Nintendo, a company perennially behind when it comes to consumer expectations for online functionality, revealed at the Electronic Entertainment Expo trade show that Psyonix’s car soccer hit Rocket League will enable crossplay between Switch, Xbox One, and PC. Sony reiterated at E3, however, that it isn’t interested in permitting PS4 owners to play with consumers on other consoles.

For Psyonix, this is frustrating. Studio publishing boss Jeremy Dunham said as much during a quick sit down I had with him at E3. After talking about the Switch port and the upcoming two-year anniversary for Rocket League, I asked how the team feels about PlayStation marketing boss Jim Ryan’s most recent statements about why Sony Interactive Entertainment won’t enable crossplay. On Tuesday, Ryan gave Eurogamer a number of excuses that fans and even developers aren’t buying.

“Unfortunately, it’s a commercial discussion between ourselves and other stakeholders, and I’m not going to get into the detail of that on this particular instance,” Ryan said before noting that he can see the interviewer rolling their eyes. “We’ve got to be mindful of our responsibility to our install base. [The demographic playing Minecraft], you know as well as I do, it’s all ages but it’s also very young. We have a contract with the people who go online with us, that we look after them and they are within the PlayStation curated universe. Exposing what in many cases are children to external influences we have no ability to manage or look after, it’s something we have to think about very carefully.”

For Dunham, that answer didn’t make any sense — especially when it comes to protecting players from “external influences.”

“I understand that stance,” said Dunham. “We want to take care of our players. But from our perspective, if PlayStation already allows cross-network with PC, which is the least regulated of any of the partners, then in theory, having Xbox and Switch in there should be fine. They’re a lot more regulated. From our perspective that concern is already handled. That’s taken care of.”

Soon after Rocket League launched in 2015 for PC and PlayStation 4, Psyonix turned on crossplay between those platforms. Sony clearly did not have the same concerns at that time.

I’ve reached out to Sony repeatedly for a comment, and I’ll update this story with any new information.

But Dunham points out that if Sony is concerned about some specific threat from an Xbox or Nintendo audience, Psyonix has already handled those concerns. PC players can’t text or voice chat with people on PS4, for example. That’s what the company would do with Switch or Xbox crossplay on Sony’s system as well.

“We think we’ve got it all covered,” said Dunham. “Some of the concerns are — that was the main one. The other one is security. We’ve worked on all the platforms and had our engineers working on the servers. Xbox has the highest security of any of the platforms. If we can pass that, we can pass any of the other security protocols. We run our own servers. We run our own matchmaking. None of the platforms are aware of what’s going on in the other’s ecosystem. We control all that.”

When I asked Nintendo communications boss Charlie Scibetta about this, he made it clear that the Switch company trusts developers.

“I’m really happy just as a gamer — let alone working for the company — that crossplatform play is possible,” Scibetta said. “We’re really focusing on reaching out to get people to focus on our IP, and we’re trying to get people involved in any way we can — whether that’s mobile, Universal Studios parks, or licensing deals.”

Nintendo doesn’t want to hold multiplayer ransom as a way to get people to buy a Switch. Instead, its want its games, characters, and worlds to act as the main attraction. And that’s exactly what Psyonix likes to hear.

“Our dream is that true cross-network play — we want it on all the platforms,” said Dunham. “It’s very important to us, for multiple reasons. One, you can have faster matchmaking. The bigger the pool, the faster the matchmaking. It benefits everybody. Two, you get better quality opponents. In a bigger pool you have better people who are closer to your location.”

And Psyonix has already done all the work. This tech is ready to go.

“Technically it’s possible,” Dunham explained. “Technically, I could make a phone call to Psyonix right now and it would be up and running before you left the room. The problem is just the political barrier that prevents it from happening.”

The Rocket League studio even wondered why Sony would block something like Minecraft.

“I don’t see why they should say no to Minecraft,” said Dunham. “Our position is, it’s better for gaming as a whole. This is what I was telling my brother. He’s in town and he was asking me the same question. I said, ‘Look at it this way. You have a Samsung Galaxy and I have an iPhone. If you told me that because I have an iPhone, I can’t call you on your Galaxy, that doesn’t make sense to me. I chose this platform because I like the shape of it, the features it has.”

And again, consumers shouldn’t feel pressured to buy an iPhone just so they can call another iPhone owner.

“Exactly. That’s our perspective,” said Dunham. “If we buy into a platform, we do that because there are elements of that platform we want. From our vantage point it’s a competitive disadvantage not to support multiple networks, because most platforms are now doing that. We’ve taken every precaution necessary to reach the minimums for cross-network support on each individual platform. From our perspective, we’ve done everything we need to do. It’s just getting a permission slip.”

After talking to Psyonix I later met up with Sony PlayStation boss Shawn Layden and asked him about crossplay. He said that PlayStation 4 already has 60 million players, and that’s enough to populate an online multiplayer game. He also said that Sony has to consider them first. When I told Layden that many players weren’t happy with this decision and that it seemed counter to PlayStation’s “For The Players” tagline, he paused for a moment. After considering it, he reiterated what he said before about Sony having to put PS4 owners first.

Dunham, however, remains optimistic specifically because of how vocal gamers often are.

“We truly believe this is a community-driven thing,” he said. “It’s up to the community to say, ‘This is what we want,’ and say it consistently. Everything we do is based on what the community has asked for, this is what the community wants. It’s how we add modes and features. It’s part of our plan for this update. It’s why we came to Switch. It’s why we came up with other features that we’ll announce later this year in other updates. That’s gaming now. Gaming should be community-driven. That’s why it’s up to them to help push us and Minecraft and all the companies that want to do a similar thing. Help us push it forward.”