Warner Bros. is known for its movies, but its games are also a big business. Warner Bros. Interactive Entertainment is No. 12 on the list of the world’s largest public video game companies by game revenue, according to market researcher Newzoo.

With new games like the upcoming Middle-earth: Shadow of War, the game company has shown that it can create new lore around Middle-earth that is as good as anything that novelist J.R.R. Tolkien wrote or that Peter Jackson created in his movies The Hobbit and The Lord of the Rings.

Warner started on this path a decade ago, and it has collected a number of studios — from Monolith to TT Games — that have been making flagship titles for years. This year, the company has launched Injustice 2, and it will release Middle-earth: Shadow of War on October 10. Lego Marvel Superheroes 2 debuts on November 17.

Here’s an edited transcript of our interview with David Haddad, the president of WBIE. 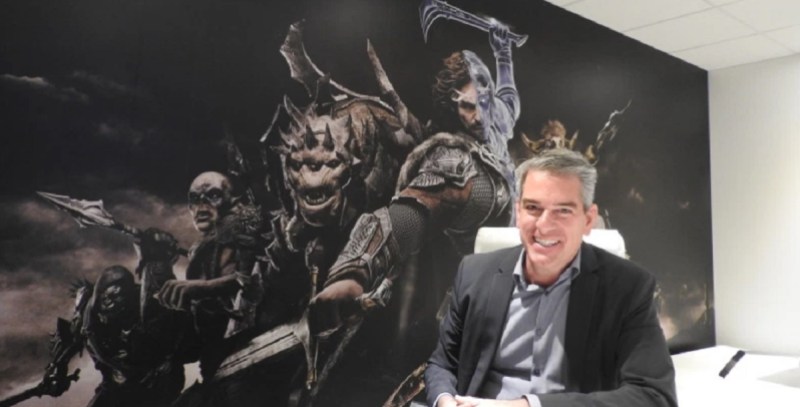 GamesBeat: It looks like you have a good E3 in the making.

David Haddad: We’re feeling very good about our lineup, yeah. In the booth, which we’re also using as a platform to stream and do developer conversations and cosplay–this year we’re trying to take our E3 booth investment and get it out to everyone that can’t make it into the show. There are consumers here, but there are still a lot more fans we think want to see and hear everything.

We’ll be talking about Injustice 2. We’re very excited. It’s the highest rated game in NetherRealm’s history. One of the highest rated games of the year. People recognize the addition of the gear system. Of course they get the combat, but the great story they put on top of that, the gear system they’ve added with a new way to play, the improved multiverse on top of what they did for MKX—we couldn’t be happier with it.

We also used this E3 to announce esports as a way to keep engagement in that game, to keep the fans not just playing, but watching. We have an emphasis around that, even though it’s already released. And we have Shadow of War coming up.

GamesBeat: Superheroes seem to be pretty hot following the success of Wonder Woman.

Haddad: Congratulations to our studio. I had nothing to do with it, but we couldn’t be happier for our partners in theatrical. The response to it, critically and from the fans, the strength going into week two—also, we had three live DC games, two on mobile and one on console. We were able to activate around that. We were able to give Wonder Woman content and DLC for our two mobile games as well as the console game. That stuff works across the whole studio. We’re very proud of that. And we’re doing more superheroes with Lego Marvel 2, a sequel to our best-selling Lego game ever. 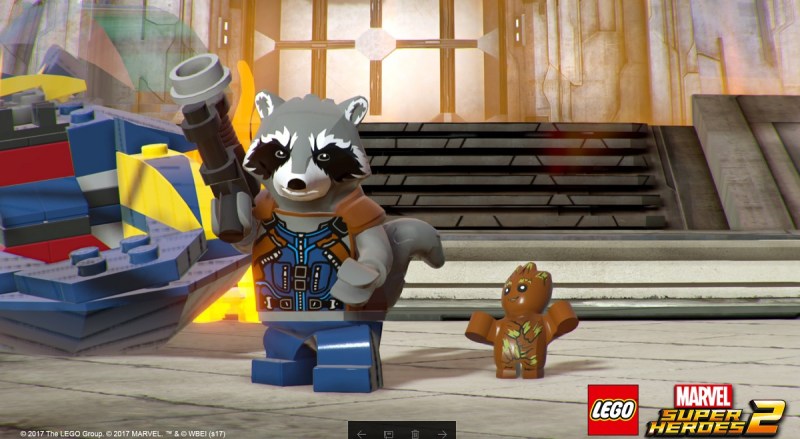 Above: The Guardians of the Galaxy 2 characters are among the many superheroes of Lego Marvel Super Heroes 2.

GamesBeat: As far as the lineup for the year, do you view this as a more loaded year than last year?

Haddad: Last year was a little uneven for us and our slate. Our approach is, we have no annualized franchises. We try to build and launch games when they have the right amount of time. Our independent studio structure doesn’t give us that annualized approach, which means that some years are less even. 2015 was a record year for us, but we believe 2017 will get very close to it. We’re excited about the strength of it so far.

GamesBeat: Shadow of War got pushed back a couple of months, but it seemed like a good thing. Red Dead Redemption 2 was delayed, too.

Haddad: It’s found its window. Frankly, we did it from a point of confidence, a point of strength. What’s coming from Monolith, all of the things they’ve put into that game, the additional innovation, the growth of the nemesis system to include your map and your territory and everything you do, the powerful story element, additional tribes, additional systems going in—really, something they innovated on several years ago with Shadow of Mordor, which we still think is unique in the industry, is this idea that every way you play and every time you play, it will be remembered. It’ll influence the way that game unfolds for you in the future. The way they’ve added that to the forts and the sieges, we just think it’s remarkable.

The game is so much bigger. It has so many more complex systems. We’re taking the time to make sure it’s fully polished for the reviewers and for the gamers. We found a nice window in October for it.

GamesBeat: The story trailer stoked a lot of questions about the mystery behind it.

Haddad: Yeah, there’s some intrigue around it. No spoilers here, but we’re glad there’s a lot of curiosity around it. We’re showing and streaming a lot here. We’re thrilled that the critics will be able to get their hands on the game and play it through. But there’s a lot more to be revealed yet as we move closer to launch. 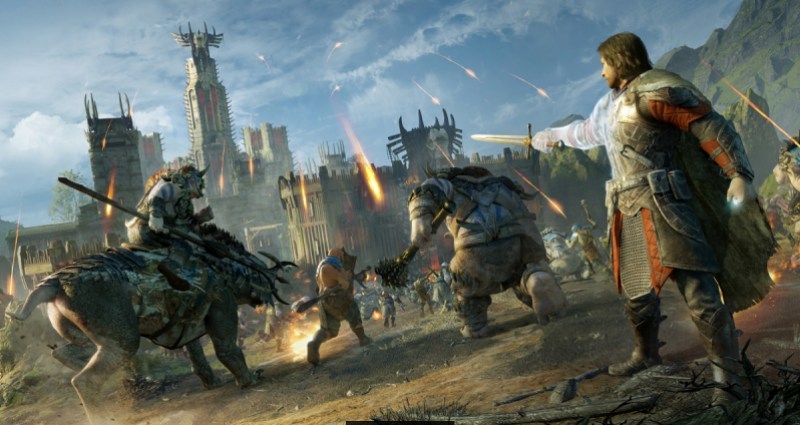 Above: Shadow of War is about taking over enemy fortresses.

GamesBeat: Are you fully informing the film guys, like Peter Jackson, that you have some interesting things to add to the lore here?

GamesBeat: It’s clever what they’re doing with — it’s a fun game, but it also means a lot to people who enjoy the lore of the series.

Haddad: There’s so much rich lore to mine and bring to an interactive, in-depth story. The studio had a lot to leverage there.

GamesBeat: Are you finding that there are two different audiences there? Do you have older Tolkien fans, people like me who are more into the novels, and then people who mostly like the fighting?

Haddad: Our ambitions for this game are very high. We’ll have multiple rings of ownership. We certainly think the first game, Shadow of Mordor, found an audience, many of which were very attached to the lore. But the uniqueness of the game systems brought in a whole new level of ownership among gamers. Our ambition is to keep that ownership ring going even wider. If you love this style of game, the third-person combat and the replayability, we expect to go even deeper.

GamesBeat: Do you notice a trend toward Hollywood approaching the game industry again? Annapurna and Skydance are both making moves. Lionsgate is greenlighting a lot of VR stuff.

Haddad: Warner Bros has been at it well over a decade. We have a collection of assets, first being our great content studios in our owned studio network, many of which also have great gaming IP. Not movie IP. As you and I have talked about in the past, whether it’s Arkham and what Rocksteady has done with that, or the Shadow series and what Monolith has done there, they’re bringing that to life in its own entertainment format.

We do believe it’s a great time to be in games, though. Platforms, the connected console, the digital engagement, the ability to see more and more hours played in our games, the ability to keep providing content to fans who want to keep playing and engaging—for us, as an entertainment studio, it’s very attractive. It has high growth, high engagement. We can reach gamers in a more direct way than ever on mobile and on console. 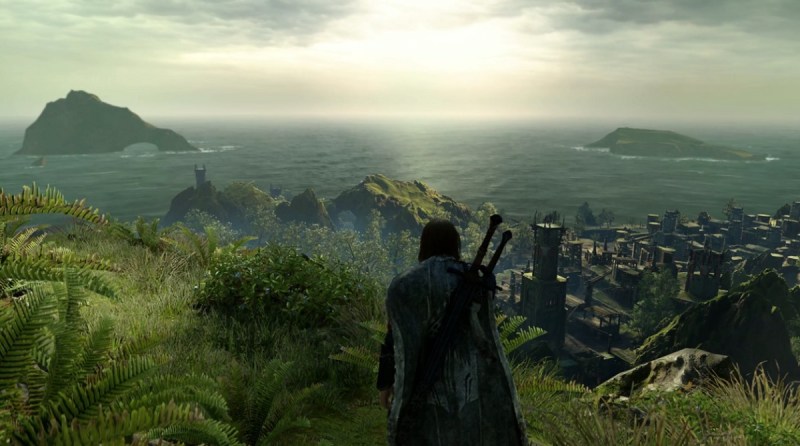 GamesBeat: Do you feel like VR is getting sorted out? Microsoft didn’t talk about it much. It’s become a bit of a puzzle.

Haddad: We didn’t see anything from them, yeah. But we saw a lot from Sony. They’ve told us the number of games in development for the PSVR. There’s going to be a lot of content to fuel the various platforms. We’ve created great game content in VR with Arkham VR. Our home entertainment division is putting VR cinematic experiences into the marketplace.

I still believe we’re in the early stages of this for consumers, but we’re watching the installed bases grow. Most important, creators continue to be mesmerized by creating for the platform. That’s ultimately what will drive this.

GamesBeat: Any reactions to the platform announcements?

Haddad: I love that, in the last year, all the consoles have invested in new hardware across the board. They’re all interesting in their own way. But the most important thing is, it gives our game creators new tools to delight the gamer. Whether it’s a new form of interactive play, or 4K and high fidelity and streaming, lots of consoles are going to be sold. Lots of capabilities are going to be added, lots of new services. It’s a rich environment for us as a publisher to build for. 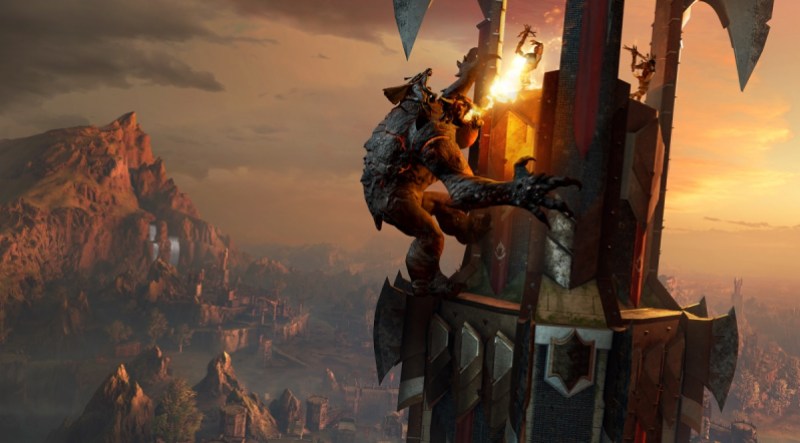 Above: The Balrog in Shadow of War

GamesBeat: What about the show itself? You mentioned you have cosplayers at the booth. There are more shareable activities going on.

Haddad: We have 16 hours of programming we’re doing from our floor. We’ve teamed up with Machinima, our sister division. They have six cameras and an entire production staff. Our goal is to give people access. If they didn’t have a ticket, but they want to know more about our content, our games, our game-makers, our fans, our esports teams that are playing Injustice, we’ll be programming that from our floor this year.

We’re talking in the early hours of this, but you can already feel the extra consumers that have been brought to the show. They’ll be tweeting and sharing. As I was walking through the crowd to get here, every other person had their phone in the air trying to video something. It’s a bit of an experiment for this year’s E3, but I think the industry is committed to making E3 interesting, both for the people attending and all those fans we have worldwide.