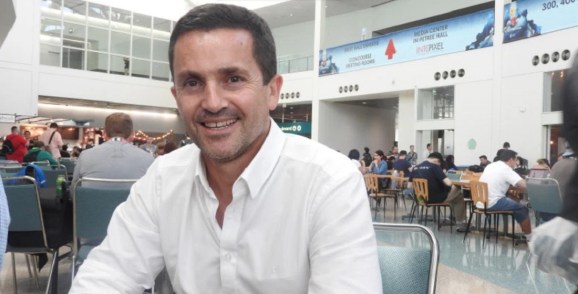 Atari CEO Fred Chesnais told GamesBeat in an exclusive interview that his fabled video game company is working on a new game console.

In doing so, the New York company might be cashing in on the popularity of retro games and Nintendo’s NES Classic Edition, which turned out to be surprisingly popular for providing a method to easily play old games like Super Mario Bros. and The Legend of Zelda in HD on a TV.

Last week, Atari began teasing a new product called the Ataribox.The video released on a non-Atari web site showed a picture of some kind of hardware product, but many people wondered if the teaser was fake. Others had no idea what the video was showing about a “brand new Atari product years in the making.”

After all, nobody makes a game console with wood-grain siding. But at the Electronic Entertainment Expo (E3), Chesnais told me that the rumors are true.

“We’re back in the hardware business,” he said.

Chesnais declined to describe a lot of details about the console. But he said it is based on PC technology. He said Atari is still working on the design and will reveal it at a later date.

Chesnais said that Atari’s revival is well under way. Atari filed for bankruptcy protection in 2013, but Chesnais bought it and pledged to make it great again. The company is now profitable, and it is engaged in making mobile games. It is licensing its brands more widely, such as licensing its Atari name for the upcoming Blade Runner 2049 movie.