Moss takes place in a fairy tale setting that springs up out of an actual virtual book. The player embarks on an adventure with Quill, the little mouse heroine, to explore ruins and solve puzzles. The storybook aesthetic has a dual function in the premise as well as the way players interact with it. Each scene is almost like a set piece from the story. When the player moves from scene to scene, the sound of pages turning notifies them that they’re moving from one thing to the next.

In the hands-on demo at E3, I was struck by how natural the camera angle felt. I played the role of the Reader, who doesn’t actually move around inside the story. Instead, it anchored me in one place, looking at the story and interacting with it without being inside of it.

“In every scene, you have a spot to be. And from that vantage point, you’re sitting in [your] chair and this room is just around you, and then you go to the next one and the next thing is around you,” said Tam Armstrong, the CEO and cofounder of Polyarc, in an interview with GamesBeat. “And they’re all laid out like a diorama, just in your arms’ reach, and that’s very intentional because we wanted the game to heavily feature physical interaction, so of course the implication there is you have to be able to reach and grab things to physically interact with them.”

By keeping the player rooted in one spot, Moss avoids the common complaint of motion sickness. I always had a clear line of sight to Quill and could control her freely around the space without having to worry about controlling the camera as well. Streamlining the controls in this way was a deliberate design decision.

Chris Alderson, art director and cofounder of Polyarc, said that they kept the controls simple, incorporating familiar commands from other action-adventure games while also featuring VR controls that enable the player to interact with the environment. The point was to keep it accessible even for people who aren’t totally familiar with VR.

“Like Tam was saying, we want to physically interact with something that’s here and take advantage of this new medium, but also at the same time, we loved playing action-adventure games growing up, and we also wanted to play that,” said Alderson. “So we feel it’s going to be a nice balance for people to jump into VR if they don’t own a headset already, or if they do have a headset and they just wanted to try something that’s maybe a little different than what’s out there.”

Throughout the Moss demo, I used gamepad buttons to jump and attack, as well as the analog stick to move Quill around. The VR-specific commands were also fairly intuitive. When I physically moved the controller around, a glowing blue orb would show up in the environment, acting as a cursor of sorts. To grab parts of the environment and manipulate them to solve puzzles, all I had to do was use the trigger buttons. 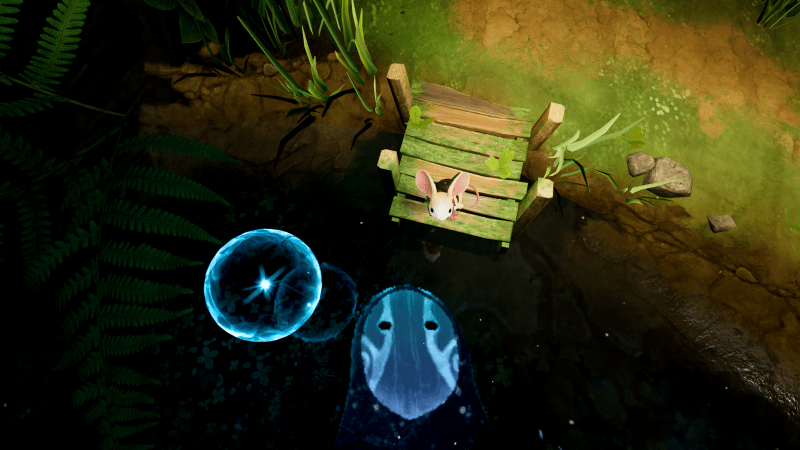 In the opening sequence of the game, the player can look down into the water and see their character, the Reader.

VR has had a bumpy road so far, with analysts like SuperData scaling back its predictions on its growth. There are a lot of challenges hampering the VR space at the moment, such as user education and even just getting VR experiences to people who may not necessarily have headsets at home. Despite that, though, SuperData still projects that VR software will be a $14 billion industry by 2020.

On the developer side, the main creative and technical challenge has been figuring out how to implement gameplay mechanics and truly utilize the new medium. Moss excels at tackling these challenges — it has an undoubtedly charming art style, but it also features clever game design such as its intuitive controls and camera positioning. More than that, it creates a bond between the player and Quill.

Even though I knew that Quill was just a character, there was such a physical presence to her that I found myself reacting to her throughout the demo.

“In this world, she literally knows where you are and sees you and knows where you’re looking,” said Armstrong. “So when you lean and look at her, she can focus on you and try and tell you things.”

The relationship between the player and Quill is a big part of Moss’s story. I could heal her by touching her with the VR cursor, and I could even grab her and feel her heartbeat, which speeds up when she’s scared. When I took a little too long exploring the environment, she made “eye contact” and gestured impatiently, urging me to hurry up.

“When you first meet, she’s not so sure of you and she might even be a little scared. But eventually, you form a bond,” said Alderson. “It’s been an exciting new way to tell that kind of story.”

Moss is slated for the holiday season later this year and will be released exclusively on PSVR. Though Armstrong and Alderson have both racked up more than a decade of experience each in the games industry, most notably at Bungie working on games like Destiny and Halo, this is the first game they’ve released as their new studio Polyarc.

“We want to have a nice, accessible piece of gameplay that’s not too long and priced in a way that feels like it’s worth the money, give people the ability to experience it — and frankly, for us to see how people respond, if they like the world and the characters,” said Armstrong. “And if they do, we want to make more.”