Sea of Thieves is a silly pirate game where you can board an enemy ship by being shot out of a cannon. Microsoft’s Rare studio has been working on it for a few years, and it is looking better each time I see it.

The title is a massively multiplayer online game where you can share a world with lots of other pirates. It’s a four-player co-op game with voice chat. You can all run the ship together, performing manual tasks like unfurling the sails or shooting a cannon at another ship. This year’s demo showed what it’s like to go on a quest to an island and unearth a buried treasure. It seemed fairly trivial, but it was one of the most interesting gameplay experiences I had at the Electronic Entertainment Expo (E3), the big game trade show last week in Los Angeles.

I interviewed Craig Duncan, head of Microsoft’s Rare studio, and game designer Ted Timmins at E3. I also played a full quest in the game with three other players. Duncan and Timmins were eager to show me the game, but Rare and Microsoft aren’t shipping the title until 2018. 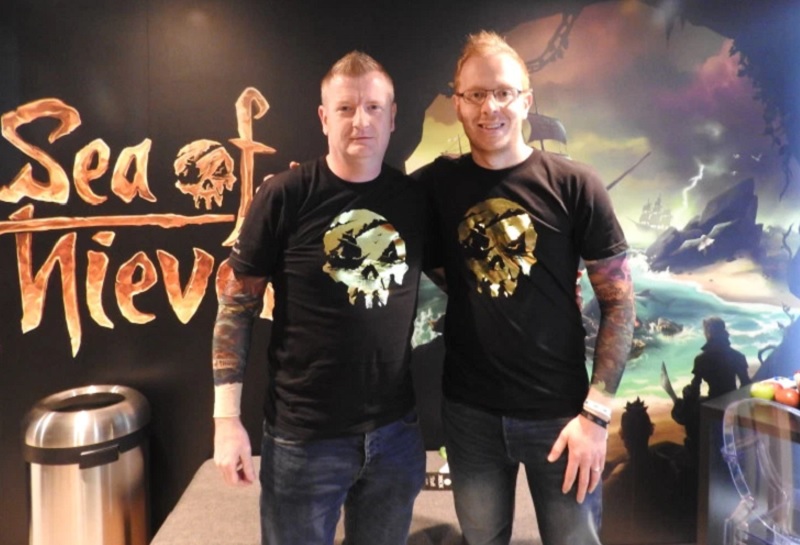 Above: Sea of Thieves developers Craig Duncan and Ted Timmins of Rare.

GamesBeat: Tell us about your game.

Craig Duncan: We had the game at E3 last year. We’ve come back this year with new features — riddle quests, storms, charts, sword fighting, everything you’d want to do as a pirate. As well as that, we’ve been having people play it. We’ve been running technical alphas. We’ve had people play through the last six months. I think we’ve invited another 10,000 people this weekend to play a build that’s exactly the same as the build on the show floor. We’re running the game from Rare as we add features.

We actually ship the game weekly to live players, albeit to what we call Sea of Thieves insiders, our community. That number has gone up by 30,000 since the briefing. We invite them in for playtests as we continue to evolve the game.

Ted Timmins: We wanted to build the pirate game we always wanted to play. When you think of the romance and fantasy from games and film – Pirates of the Caribbean, Monkey Island – it pulls on that string of being on the open seas, yourself and your crew, looking at the horizon and wondering what’s over it. What are you going to encounter? We could ask 10 different people and they’d all give us 10 different stories of what they saw and did in the game. As more and more people play, with the 140,000-plus sessions we’ve had—I wouldn’t quite say we have that many stories, but we have hundreds of stories. There’s so much variety in what people are doing in the experience. 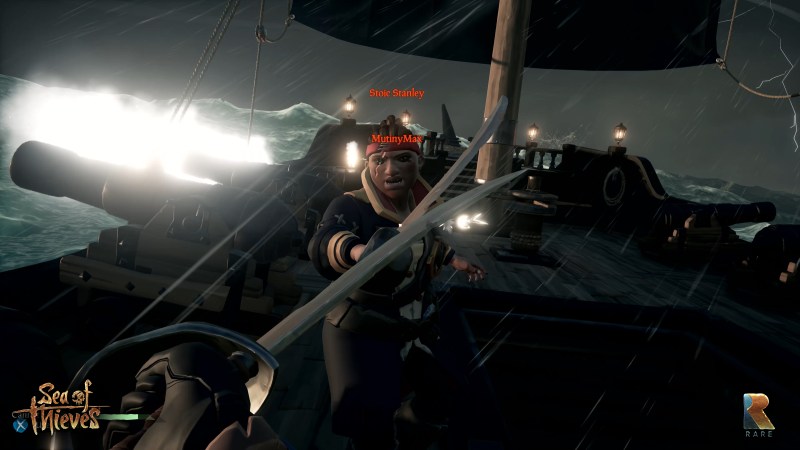 Duncan: What’s magical about Sea of Thieves is it’s you and your crew going on an adventure that feels like your adventure, like your own pirate story. But other crews are doing that in parallel at the same time. Every time you see a ship on the horizon, or you see a crew on an island digging for treasure, that’s another group of players. Every time you play, there are different stories and different adventures.

Timmins: You can wonder about their intentions as well, because they don’t always have bad ones. You might have seen at some point in one of our YouTube videos — in one of our first play sessions we jumped in with real players and we actually got together as a double crew. They set sail together with us. It was really funny to watch.

Duncan: It’s a pirate world. A lot of our conversations begin with people saying, “Yeah, I’m in there with my crew, but what do I do?” Really, what you’re doing is building your own quest to become a pirate legend and earning notoriety in your world. One example is we’re using our technical alphas to immortalize the early pirates in our game. Because we keep updating the game and adding features, the first pirate that was killed in the very first technical alpha — his Gamertag is inscribed on our ghost ship. When you die in the game, you go to the ghost ship, and if you look on one of the pillars you’ll see the name of the first player who died. The player who got killed the most times from falling damage, there’s an inscription by a cliff with a couple of skeleton feet coming out of the ground.

All these little things are magic moments where players — people play games so differently now. We want players to share stories. We want them to have their own adventures and talk about them. People stream and make videos and create content about their games. They talk about them on social media. It’s super important to the way people enjoy games now. We had the showcase event yesterday with fans and press, and ultimately every single person came out talking to each other. “What’d you do?” “Oh, I fired myself out of a cannon and then we landed on an island and fought skeletons!” “We followed another ship into a storm and crashed on the rocks!” All those pirate fantasies — our game is just this wonderful world of emergent pirate fantasies for you to go live. 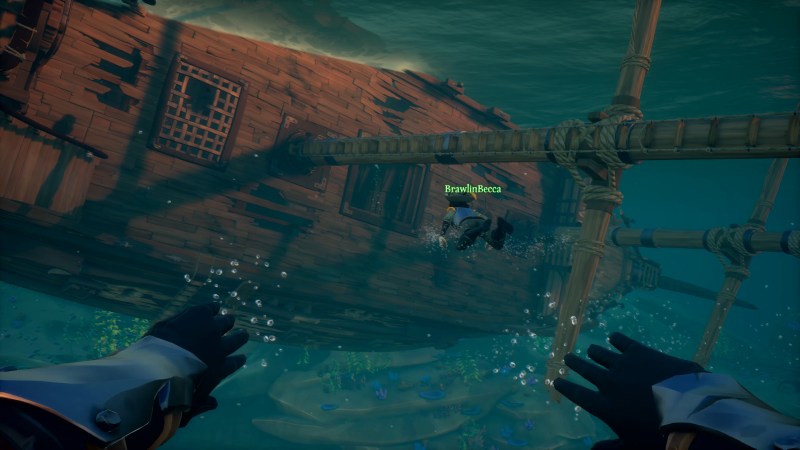 Above: Sea of Thieves Underwater 4K

Timmins: When you think about the pirate lore of the past, like Blackbeard and famous ships like the Mary Celeste—to Greg’s point about immortalizing players in our world, they’re creating that lore. They create their own characters and become famous in our world. I can imagine a time in the not-too-distant future when there’s a legendary ship that’s someone in our community. When you see them with their liveries and their figurehead coming over the horizon, you immediately say, “Guys, we need to get out of here. I know this guy.” It’ll be so special when we start to have that kind of breakthrough.

Duncan: We announced the release date, in the other key bit of news. It’s early 2018. Straight after the E3 briefing we did the first stream of Sea of Thieves live on Mixer. We finished the briefing and did an hour of co-streaming – Joe, our executive producer, alongside three of the Mixer streamers. They literally played the game for an hour, going on an adventure they’d never played before.

We’re getting so much positive feedback on how much fun the game is to watch. It makes people want to be there with their own crew and play together. We’re great believers in social play. Everything we’ve designed in the game is to be played cooperatively.

GamesBeat: Something about being a pirate makes people create their own entertainment.

Duncan: People know what a pirate does, or they have their own view. If I say to you, “Hey, what kind of pirate would you be?” — whether you’ve watched a ton of Black Sails or Pirates of the Caribbean, or if you’ve grown up playing Monkey Island, we know players have different motivations. For some people it’s exploration. Some people want to socialize with their friends. Sea of Thieves strikes a nice balance for those players to exist together.

Timmins: It’s great reading the forums as well. We’re finding that players are writing their adventures as short stories, as a narrative. And then they’re comparing as they go through the forums. “I had something similar!” “I did something completely different!” I saw one where someone says, “I think we ran into each other, because I had your story from the opposite perspective.” The lore just keeps building from the community. 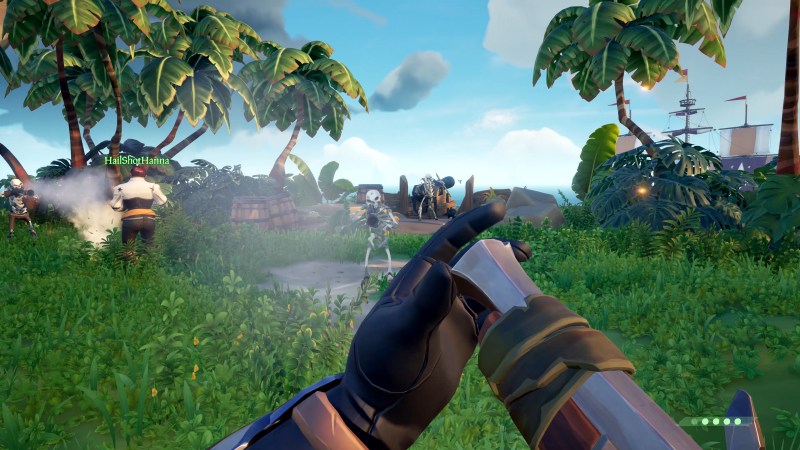 GamesBeat: How did you make some the basic choices here, like the more cartoonish 3D look?

A good example is ship encounter frequency, how often you run into other pirates in the world. There is no way we could guess that as a development team, without having thousands of people play across our servers and assessing the telemetry of when someone sees a ship across the horizon. When does that sighting turn into an encounter? It’s all these insights from players playing that help us shape the game.

Back to your question about art. We see Sea of Thieves as a multi-year game journey for us. It’s very clear from the art style–we wanted something that would be timeless. A timeless art style is super hard to do, but that’s why we’ve gone for this very painted, almost lived-in — Ryan wanted everything a little bit wonky. If you look at the ships, everything’s a little bit warped, a little bit bent. The barrels have this rugged look to them. You spend a lot of time in our game looking at the sea and the sky, looking at the horizon. We want that to be a joyful, delightful place to be. That’s what Rare does at its best — provides this delightful world for you to live in. 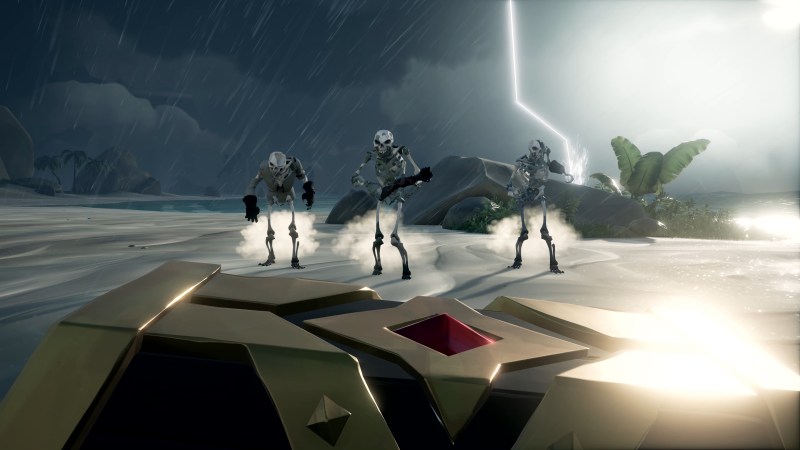 GamesBeat: It sounds like you’ve loaded up the world with things to do, but what about directing the player? What role do quests and stories play there?

Duncan: It’s an interesting issue. You want directed goals, but in an emergent way. Again, without pushing too much on the design stuff — in what we’re showing at E3, we give you a riddle map. We give you a couple of classic Treasure Island maps, X marks the spot. Your job as a crew is to find out where that island is, go to it, and maybe encounter something along the way — which is pretty likely, because there are lots of things in our world. That’s a quest. We have a number of quests that make up a voyage. Really, you and your friends go on this voyage together, which is your own personal adventure.

What we see happen — people decide what they’re going to do. “We’ve got a riddle map for this island. Let’s go do that.” But then distraction comes in. “Hey, there’s a big flock of seagulls up there. What’s that? Oh, it’s a shipwreck. Let’s go explore that wreck.” That can tangent your adventure for 20 or 30 minutes. Oh, another crew just showed up. And so on.

The difference between an E3 demo, where we’re trying to get as many people through as we can in 30-minute chunks — that’s super hard when you have a game like the one we’re building. After launch, where you’ll get those quests from will be the outposts. As you do quests you’ll get progressively more difficult quests. Again, it comes down to building the kind of meta-quest over the whole thing, your quest to become a pirate legend.

GamesBeat: What about keeping crews together long enough for everyone to have a satisfying time?

Duncan: We’ve seen our community do this in action. People fall in love with the game. They make friends, which blows my mind. I’ve been building games for 15 years. People say things like, “I got randomly put together with this group of people, perfect strangers, and within 15 minutes it was like we’d known each other forever. We made friends in Sea of Thieves.”