We already spend most of our time staring at screens, so you know what would be great? If we could stare at some screens … on our screens. Kingsway is a cheeky new “OS role-playing game” where everything takes place on a fictional operating system that gives off serious Windows 95 vibes. Developed by Andrew Morrish and published by Adult Swim Games, it’s currently slated for release sometime this summer for PC only.

When I got to clicking around at a hands-on demo at the Electronic Entertainment Expo last week, it started simply enough. I “booted up” the system, and a window popped up so I could type in my name and create my character. Then it was on to the desktop. Two windows sat on the right side: a log of all the moves I’d made so far, and my stats such as health, mana, and experience points. The screen showed four icons: World, Player, My Bag, and Quests. A classic mail icon represented Quests, and I saw that straight away there was one new message: an orientation email from Adventure Corp explaining that I had to get to the King’s Castle.

“Aside from the obvious influences of old computer RPGs and operating systems, the game that really inspired the first prototype of Kingsway was Papers, Please,” said Morrish in an email, referring to the Lucas Pope’s dystopian puzzle game that placed players in the shoes of an immigration officer. “It might seem weird, but it was the way the interface became part of the game in Papers, Please that clicked with me.”

After reading Adventure Corp’s email, I clicked on World — represented by a globe, similar to a generic web browser — and brought up an overworld map with various nodes where I could travel. When I selected one, a progress bar popped up in a separate window, ticking through as I moved closer to my destination.

As you can surmise by now, Kingsway has a lot of windows. It has a window with the overworld or dungeon map, one with my progress bar, one logging all the moves I’ve made, and one with my stats so I know how many more experience points I need before the next level. When I encountered a monster on the map, yet another window appeared, with buttons for attacking, defending, and escaping. Once I defeated the monster, a pop-up showed what kind of loot it left behind. I opened my inventory — My Bag, which, you guessed it, is another window — and dragged and dropped the loot into it. 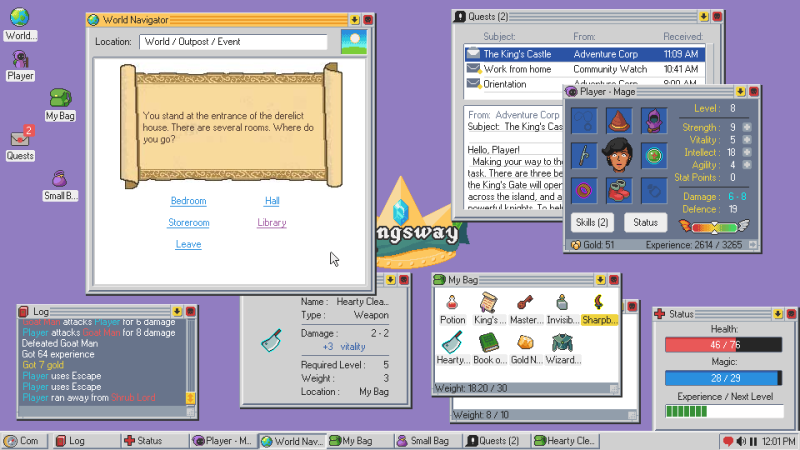 If this seems like a lot of clicking, it is. But that’s kind of the fun of Kingsway. When you’re in the heat of battle, windows swarm the screen. These tell you that your block failed, that your health is low, and that the monster is attacking. It triggers the kind of lizard brain panic that only 21st century screen addicts can appreciate. It’s like when you see a coworker’s web browser and they have so many tabs open that nothing is beautiful and everything hurts.

Morrish said that this was a deliberate design decision that builds on Papers, Please’s paperwork purgatory.

“As you got more and more papers and instructions and things to move around and manage, [Papers, Please] got harder, and your success depended on how well you organized the clutter. Kingsway takes that idea of clutter a step further,” said Morrish. “You have to manage the different windows, popups (enemies), files and folders (items and bags), quests, and images, as well as your more typical RPG elements.”

When I died, the main screen offered options to spend my in-game currency on upgrading starting equipment like a better sword. I could also spend coins on buying “hotkeys,” enabling things like tapping “C” for quickly bringing up the character window. Would I spend my hard-earned coins on hotkeys for the sake of no clicking? Yes, yes I would. It was another example of having fun with the OS aesthetic. However, finding a way to incorporate RPG mechanics was one of the challenges in developing the game.

And it’s true, everything was fairly intuitive. After all, I stare at a computer all day.

Aside from the playful take on the user interface of RPGs, the core of Kingsway is a tongue-in-cheek take on the fantasy RPG. There are even little choose-your-own-adventure interludes in the vein of text adventures. I stumbled across a house and the game told me, “You stand at the entrance of a derelict house. There are several rooms. Where do you go?”

Adult Swim has worked with Kingsway developer Morrish before, publishing his shooter-meets-Tetris game Super Puzzle Platformer on Steam in 2013. It’s also worked with other indie developers, publishing titles like comedy adventure game Jazzpunk in 2014 and Rain World earlier this year. Its recent virtual reality title, Rick and Morty: Virtual Rick-ality, was developed by Owlchemy and generated $3 million — a definite success in an industry that’s still figuring out what sticks.

It’s a publisher that’s used to experimenting and isn’t afraid of getting a little weird. And same for Morrish, though he thinks that Kingsway doesn’t require too much explanation.

“Because of the way Kingsway presents itself as a PC OS, players so far have needed very few instructions to get started,” said Morrish. He added, “I think it’s easy for a player to pick up something that seems familiar, and it’s fun to see something that is usually boring and utilitarian subverted into something more colorful and silly.”