The state of Louisiana—the Pelican State, apparently—was not really considered a hotbed of game development when Jason Tate and Evan Smith were working for the only studio in Baton Rouge. When that company folded, it became a crossroads moment: move to the Bay Area or any other gaming hotbed, or stay where they were and make the best of the situation in their home state.

“We opted to start our own company so we could make games, and stay in Louisiana,” says Tate, the co-founder and lead programmer, of the decision he made with Smith, who would act as Creative Director on the two-man team.

This decision in 2011 was assisted by the state government’s efforts to build the games industry, which had even seen representatives visit E3 to alert indie companies to the tax programs and other opportunities being offered to attract teams. “We’re part of an incubator called the Louisiana Technology Park where we now have a very cool facility, it’s very affordable, and six years later there are seven indie companies under one roof,” says Tate.

What makes the Pixel Dash story a little different is that despite just being two people, they worked on client projects to supplement funds raised for their game, Road Redemption, through Kickstarter, the Humble Store, and eventually Steam Early Access. “In the beginning, it was basically two people doing the job of 10 people,” says Smith, “but it was about building something in the community that would have some longevity, so we didn’t do just one project and bet everything on that.”

Having seen and been a part of a team that had bet on one horse and ultimately fizzled, this team was determined to ensure it had legs. “It’s been an interesting journey over five years, bouncing around projects like corporate client work, e-learning, and taking our gaming skills over to training simulations,” says Smith.

Yes, Pixel Dash has crafted apps and other software for diverse topics like student preparedness at Louisiana State University (creating an app that gamified job searches, including elements where you follow a create-your-own-adventure path and could learn at the end where you did well or went wrong. The tool would even advise on outfits so that students would be prepared for the ‘business casual’ world.)

While for a small team this has meant that work on its prime gaming project may have taken some time, it has kept the lights on and the process running. It hasn’t been a one-way street of gamifying corporate apps or programs, however.

“One of the benefits of working with clients is the game design expertise can travel over to the corporate world, but you can learn things from that side, too, that you can then channel back to your game side,” says Tate.

The purpose of all this is to make sure that Road Redemption sees a full release. For an indie game to have started development back in 2011 and hitting Kickstarter in 2013, that’s a long cycle. But due to this diversified client list, the game will see full release, and that’s the main goal of every developer. “The combination of Kickstarter and Early Access has been the reason we could fund a project of this size. All the funds flow straight back into development,” says Smith. 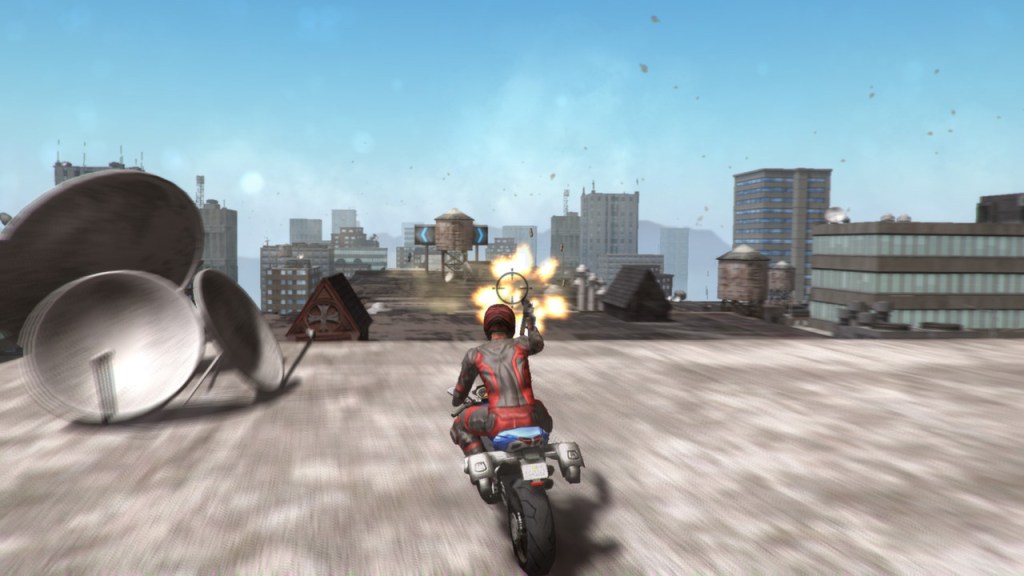 It may not surprise you to learn that a game titled Road Redemption is designed in the spirit of the classic road beat-em-up, Road Rash. Inspired by games like Twisted Metal and even Skitchin’ that was released on the Sega Genesis, it would seem from community feedback and continued engagement with the game through the fundraising campaigns, that there is a passionate audience for this kind of road combat game.

“We wanted to add new stuff like projectile weapons and guns, and we were surprised how polarizing that was,” says Smith. “Some of the purists said ‘there are no guns in Road Rash, there should be none here’.”

“There’s a camp of people very vocal about staying true to the original and another camp excited about something different,” adds Tate.

Community engagement and interacting with YouTube influencers and streamers has also kept Road Redemption in the minds of gamers. “It fits well for YouTubers because a lot of ridiculous things happen, so we’ve had PewDiePie cover us twice, and others. We’ve certainly been trying to build relationships…and have over 50 million combined YouTube video views,” says Smith.

It’s a vital marketing outlet for a team without the manpower or budget to follow more traditional advertising methods. Instead, they rely on the forums where gamers discuss their tactics and share reviews as simple as “that was awesome…Santa Claus smacking someone in the face with a shovel.” It also allowed them to balance certain aspects using community feedback and consider requested modes.

Of course, a couple of handy tactics involved appealing to the egos of some prominent influencers. “One thing we did early on was put a lot of the YouTube personalities names in the game, so they were encouraged to go find themselves in the game,” says Smith. Crafty! 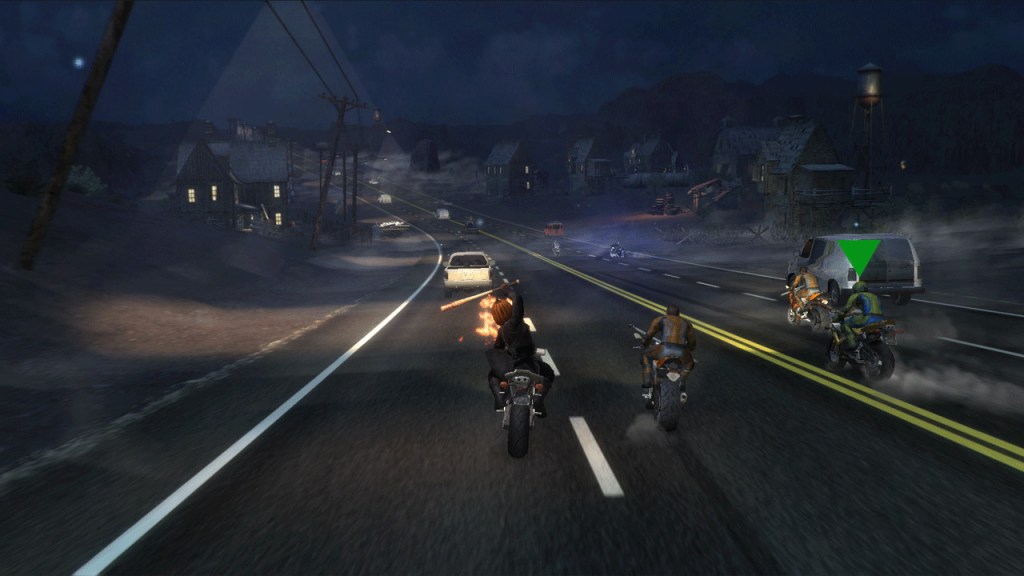 Above: Beating rivals with a baseball bat from the back of a bike…don’t try this at home, kids.

“As internet comments go there’s always a lot of hate, so when you see that one person who seems enamored, it really pushes you forward to do well,” says Smith. Following this format also allowed them to balance certain aspects using community feedback and consider requested modes. “One mode was to have to beat the game with just one health. We think that’s going to take ages, and then within a few days on the forums, people are talking about having beaten it,” says Tate. Yeah, they do that, but with the time to make tweaks and follow the myriad comments, the result should be a game that has the longevity the company hopes to achieve.

It’s quite an achievement that may have fallen at the first hurdle if not for the combination of support from the state, the ease of entry through digital distribution, and emerging funding opportunities.

That’s something important for this team in the state of Louisiana. Pixel Dash has taken on interns in paid and course credit programs from LSU, and many of them have turned into full-time employees.

It’s a far cry from the opportunities Smith saw several years ago. “Growing up in Louisiana, it’s not something we thought would be here for us. Personally, it’s like ‘wow, this is a thing now’. We can develop games here…we have dev kits and are working for console, and it would never have happened years ago.”