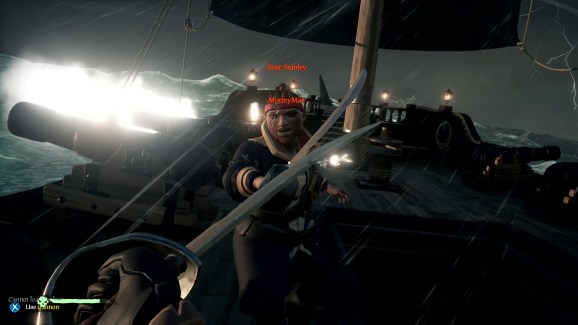 Sea of Thieves combat in 4K.

If you’ve paid close attention to the language coming out of major gaming publishers recently, you’ve probably heard buzzwords like “games-as-a-service” (GaaS) or simply “services.” That’s when a developer builds a game to keep players coming back for months or years with regular content updates and a core structure that never really ends. Think Overwatch or Destiny, and this year’s E3 (Electronic Entertainment Expo) trade show in Los Angeles revealed how services-based games like those are changing the industry.

Microsoft, in some ways, is ready for that change. But when it comes to Sea of Thieves, the company’s online pirate simulator that’s due out in 2018, Xbox boss Phil Spencer seems unprepared to commit to the new world of games-as-a-service.

Spencer has repeatedly said in interviews over the last couple of years that Microsoft makes most of its money from services (Office 365, enterprise tools, the Windows Store), and that’s one of the reasons he doesn’t care if people play Microsoft games on an Xbox or a PC as long as they’re logging into the Xbox Live online platform. And he also talks about the data that shows people are pouring huge chunks of their life into fewer games. For example, Spencer himself has played Destiny for 700 hours, and he has seen people doing that with games like Minecraft and Ark: Survival Evolved. And that has created a new market dynamic where games no longer live or die by their first-week sales. Instead, games can roll out slowly and grow into giant successes over time.

“Sometimes you see these games start small and get bigger over time,” Spencer said in an interview with Giant Bomb. “I think Ark: Survival Evolved is a great example of that. PlayerUnknown’s Battlegrounds [is also a] great example of that. They come out and they actually get bigger as more people play and the virality of watching more people play and seeing their friends plays.”

Microsoft has seen this first-hand with Ark: Survival Evolved on its Xbox Preview Program, which is its equivalent of Steam’s Early Access portal for unfinished games. But even more directly, Microsoft owns Minecraft. Developer Mojang is in the process of unifying Minecraft into a single platform, but the game has always worked as a service with no end and regular updates. And it is the epitome of games that start small and get bigger.

Minecraft originally launched way back in 2009 as an unfinished alpha game that players could buy to support development (this was before Valve codified Early Access), and it grew into one of the most successful games ever by 2012 and 2013. But it hasn’t stopped growing, and Minecraft’s biggest month ever was December 2016, according to Microsoft.

But Spencer isn’t just excited about services-based games, he also likes to point to them as the reason he is reluctant to invest heavily in single-player experiences built around a traditional narrative.

“One of the things I’m worried about, and I’ve talked about this before, is the single-player story-driven games,” said Spencer. “It’s hard when so much of the gameplay that happens on a daily basis is on these games that are long and growing and services based. And then you get a smaller single-player experience, and how does it find its audience when so many hours are taken up [with other games].”

But while that has manifested in a lack of marquee Xbox exclusives that compare to Sony or Nintendo originals like Horizon: Zero Dawn, God of War, Zelda, or Mario, Microsoft doesn’t seem quite ready to commit to the new world of games as a service either. If Spencer was ready for that, he would probably launch Sea of Thieves right now as part of the Xbox Preview Program.

Banjo-Kazooie developer Rare is still building Sea of Thieves, and the studio is in the process of figuring out how to structure the game. But it has a strong core. Sea of Thieves is about online multiplayer gameplay where crews of real humans control their individual pirate and can work (or goof off) together on the high seas. You communicate with one another to control your galleon in sea battles with competing bands of pirates played by real people, and you must coordinate to survive raids on cursed islands to find hidden treasure. We’ve played it, and it is exciting and new and who knows what the final experience will be like.

The Xbox Preview Program seems ideal for a game like Sea of Thieves.

And Microsoft craves that kind of relationship between fans and this game. You can sign up for the Sea of Thieves Insider Program on the game’s official web page right now, and that will get you invites to special play sessions on Xbox and Windows 10. But Microsoft should just go all the way and follow the model set up by games like Minecraft, PlayerUnknown’s Battlegrounds, and more. Let people buy the unfinished game right now for $30, and let them play it whenever they want. Then keep updating it and raising the price as it enters beta and then the final retail release.

If Spencer is using services-based games as an excuse to avoid making single-player experiences, then he should fully embrace every aspect of the new model. And that means opening up Sea of Thieves to anyone who wants to try it as soon as possible.