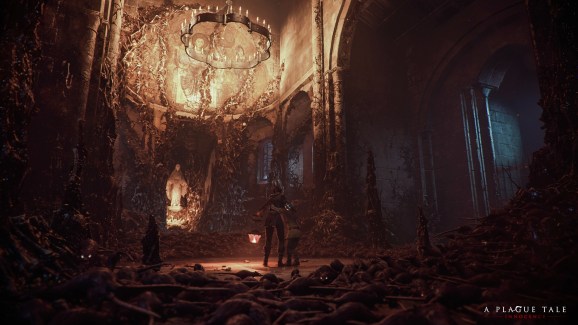 A Plague's Tale: Innocence is one of the most creepy -- and captivating -- games from E3.

I’m still in my recovery coma after last week’s Electronic Entertainment Expo, the huge game industry gathering at and around the Los Angeles Convention Center. E3 itself is a three-day tradeshow, but it’s long burst from those constraints and is now a near week-long celebration (or, to borrow a turn of phrase from The Hollywood Reporter‘s Tim Goodman, a Death March With Cocktails) of gaming.

Much of E3 focuses on the triple-A (aka blockbuster) industry. Think Call of Duty: WWII, Doom, and Assassin’s Creed: Origins, Ubisoft’s latest in its flagship series. But I found that to truly appreciate this show, and the industry, you need to take a break from the pomp and the flash and see some smaller games.

And the best of those smaller games are, of course, on the PC.

Take my game of the show, Genesis: Alpha One. It won one of our Unreal E3 awards, which we present with our partner, Epic Games. It’s a mix of genres that has no right to work: space exploration, starship construction, psychological horror, first-person shooter, and roguelike. Sounds like a mess, huh? It’s ends up being quite elegant as you explore, find new races — and clone them or add their DNA to humanity’s own — and fight some nasty aliens in the gangways of your starship. And if you die, you don’t lose your progress, as the captaincy transfers to the highest-ranking officer on the ship.

Or A Plague’s Tale: Innocence. It stars a pair of children, a sister-and-brother team who try to survive in Medieval France … during a rat plague. The big question here is if the infestation is worse than mere rodents. It’s revolting — I nearly puked watching the demo, as rats and I are not on good terms — yet captivating.

And Mount & Blade II: Bannerlord is the sort of game you can only find on the PC. The first started as a project from a husband-and-wife team working out of their garage in Turkey, and it became a PC gaming hit. Seven years after the original’s launch, you can still find more than 10,000 people each day playing it on Steam. Mount & Blade is about recruiting and fielding an army on a large battlefield, and in the sequel, you have more control over your soldiers. Don’t worry — it’s still fun to just trot around the field, mowing down foes with a spear or lance from atop your horseback. And the biggest reason why it’s found such success is the mod scene — I played it more as a Star Wars game than a medieval army battler thanks to modders.

While exhausted, E3 did recharge my gaming batteries thanks to these and other PC games (like Pillars of Eternity II: Deadfire and the sci-fi city builder Aven Colony). Now, if you excuse me, it’s time for me to find more loot in Path of Exile, the modern take on online Diablo II.

P.S. Watch GamesBeat give the new Total War: Warhammer II a go — will our Lizardmen conquer all?

The adorable action-adventure virtual reality game Moss debuted at this year’s Electronic Entertainment Expo last week for Sony’s PlayStation VR. It’s the first game from Polyarc Games, a studio founded by ex-Bungie developers. Moss takes place in a fairy tale setting that springs up out of an actual virtual book. The player embarks on an […]

More companies at the Electronic Entertainment Expo tradeshow are targeting a PC gaming audience. Alienware had a booth on the E3 show floor to reveal new prebuilt rigs with AMD’s Ryzen Threadripper CPU. Razer was showing its new Razer Blade Stealth with a smaller bezel and Intel’s Kaby Lake Core i7. And Creative was demoing its […]

If you’re paying for Twitch Prime, you’re going to be getting free stuff in Blizzard’s biggest games thanks to a new deal between the two companies. Twitch announced today that it will have the exclusive third-party streaming rights for some of Blizzard’s biggest tournaments through 2018. As part of the deal, Blizzard is also giving […]

It’s the 20th anniversary of Natsume, Inc.’s Harvest Moon, and for the first time, the iconic farming simulator will be coming to PC with Harvest Moon: Light of Hope. In its long history, Harvest Moon has been available on a variety of platforms, starting with Super Nintendo and releasing on all Nintendo and Sony consoles […]

OPINION: Arguably, no company in modern games has benefited from the work of modders more than Bethesda. My first experience with The Elder Scrolls III: Morrowind role-playing game over a decade ago involved installing it, meeting the first few inhabitants of Seyda Need, shaking my head in horror, and then typing “morrowind face mod” into Google. […]

The best Unreal Engine games of E3 2017, selected by GamesBeat

Once again this year, GamesBeat teamed up with Epic Games and Nvidia to find the best Unreal Engine 4 design teams at the Electronic Entertainment Expo in Los Angeles. Our staff spent much of our time at the show floor checking out games using Unreal Engine, and we then debated and argued until we could […]

The idea of “games-as-a-service” is nothing new to Electronic Arts. But just as the games themselves change and grow over time, EA’s approach to games-as-a-service has also evolved. For example, 2015’s Star Wars Battlefront followed the Season Pass template, where players paid money for access to new game modes, multiplayer maps, weapons, and characters. One of the big headlines of last week’s EA Play event before E3 was that the upcoming Star Wars Battlefront 2 was ditching that approach, making such upgrades free for all players. (via Gamesindustry.biz)

League of Legends needs to preserve its written history

My mother doesn’t exactly understand what I do for a living. To be fair, it’s a bit of a convoluted explanation: I work for several clients, and collect several incomes. It all falls under the same umbrella: I professionally write about competitive gaming and esports. Sometimes this means I write human interest stories, sometimes I write recaps, and of course I write Rift Tales here at PC Gamer. I don’t bring this up to brag, but to provide necessary context to my upcoming plea: League of Legends has an archival problem, and the Esports Wikis situation has revealed just how deep that goes. (via PC Gamer)

Inside Discord, the Chat App That’s Changing How Gamers Communicate

The Church of Makoto Discord channel hosts 55 people. They gather to discuss Persona 5, and particularly, Makoto – the mousey student council president and party member who transforms into a power-metal diva on an ethereal motorbike once she enters the cognitive realm. Persona 5 is a static, single-player RPG. There are no expansions on the horizon, and no leaderboards to conquer. But that’s Discord’s specialty. Think of it like Slack for gamers; a way for anyone to host a surreptitious, invite-only chat room for any community, no matter how specific or perverse. The Church of Makoto is a place of worship. Those 55 users post hand-drawn photos of their favorite kawaii high-schooler and adorn each image with beaming, hearts-for-eyes smiley faces, or more crassly, the eggplant emoji. (via glixel)

Grand Theft Auto V’s user reviews have dipped from glowing and enthusiastic to angry and negative, causing a mass downwards shift to “mixed” on Steam. This doesn’t come randomly, as if hundreds (or more like thousands) of players suddenly came to their senses and decided they did not enjoy Rockstar’s polished open world adventure. Oh no. These mass negative reviews are an act of protest. (via US Gamer)