Acquired.io has raised $2 million to make it easier for mobile advertisers to manage user acquisition campaigns across dozens of channels without a lot of manual hand-holding.

The Foster City, California-based company has created a centralized platform to manage user acquisition across channels such as Snapchat, AdColony, and Chartboost, among others. It has created a single dashboard for an advertiser to manage all their channels, discover new ones, allocate budgets, create rules for automated decisions, and more, said Andrey Kazakov, cofounder and CEO of Acquired.io, in an interview with GamesBeat.

“The sheer number of apps out there today makes it difficult for companies to get noticed. To be able to compete, advertisers need to maintain a wide and diverse portfolio of channels to acquire users, which puts enormous pressure on UA teams,” said Kazakov. “Most advertisers have a portfolio of channels they deal with which spans from 10 to 50 channels depending on the company. Constantly discovering ways to acquire users is a part of the day-to-day job for UA teams, adding even more manual operations to their daily work. Our goal is to minimize the unnecessary manual work they face every day.”

Acquired.io was started by Kazakov and Max Gannutin, founders of mobile marketing company AppScotch, which was acquired by AppAnnie. Investors in the $2 million round include Jonathan Zweig, cofounder of AdColony, and John Zdanowski, former CFO of Linden Lab, the company behind Second Life.

Most user acquisition teams spend half their ad budget on Google and Facebook and the other half on dozens of smaller channels, which must be managed individually, making the process time consuming and laborious. Acquired.io has found that the average UA team spends 80 percent of their time on this manual grunt work. 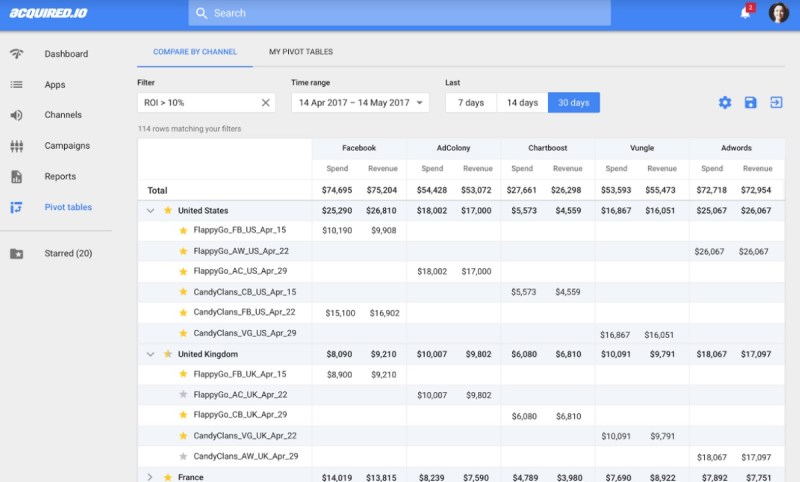 The problem is only getting larger — the number of channels grew from 700 in 2015 to 1,500 this year. In the past, user acquisition managers would have to sort through these channels to figure out which ones to work with. Acquired.io takes that task off the backs of the UA managers. That has made at least one big game company happy.

“I constantly look out for user acquisition tools, and I don’t see a similar competitor who consolidates everything in a single dashboard,” said Mark Zhang, senior vice president for user acquisition at IGG, the Hong Kong-based online game company that has apps such as Lords Mobile, in an interview with GamesBeat.

Acquired.io allows UA teams to manage all of these channels from a single place. The platform currently supports 20 channels, which will increase to 50 by the end of this year.

“Our team doesn’t have time to deal with a small ad network, even though it may be useful,” Zhang said. “What Acquired.io can do for mobile advertisers is like what Apple and Google do for mobile publishers. They make it possible to deal with the smaller companies.”

In addition to more efficient management, the platform also enables UA teams to easily discover and test new channels without having to go through a costly new setup process. Identifying high-performing smaller channels is especially important for UA teams as Google and Facebook become increasingly competitive.

“Acquired.io centralizes our UA data and gives us the tools we need to increase our marketing efficiency,” said Mark Braatz, general manager and vice president of growth at TextNow, another Acquired.io customer, in a statement. “We’re able to leverage rules-based optimizations across channels to maximize return on investment — managing these capital allocations within a single dashboard is a huge win.”

In the future, Acquired.io will add automation features that further simplify campaign management. In addition, it will expand into new markets so that customers can use the platform to discover international channels.