CastAR was one of the most ambitious augmented reality game companies in the business. But it looks like it has shut down amid one of the most obvious problems in the fledgling industry: It was too early, and the challenges it faced were incredible.

CastAR failed to raise a new round of funding and shut down this week, according to a report from game news site Polygon. That spelled the end to a years-long project by former Valve employees Jeri Ellsworth and Rick Johnson to create a unique AR tabletop gaming platform, one that wanted to deliver the next step in a magical kind of play.

You could say it was a victim of the warned “gap of disappointment” that AR and its cousin, virtual reality, are facing as reality sets in. CastAR, which raised $1 million in a Kickstarter crowdfunding campaign in 2013, is only one player in what is expected to be a vast market with many different companies, but its failure to raise a new round in time shows how difficult navigating the gap will be. 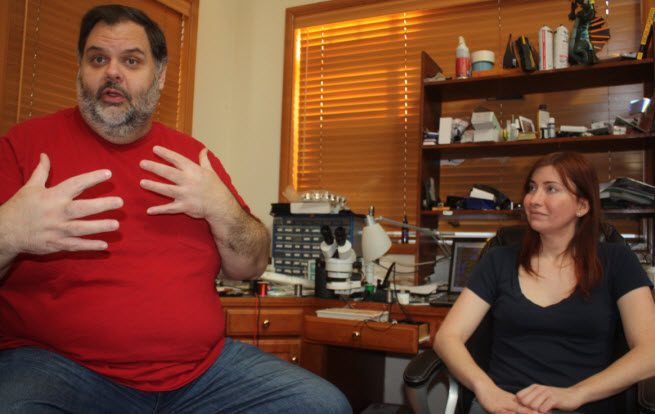 The company was born in 2013 the Woodinville, Washington, home of Johnson. He was a former software engineer at Valve. Ellsworth was a hardware designer who was looking for a new way to play games by projecting animated images into a realistic backdrop. They had tried to make their tech work at Valve, but that company decided to focus on virtual reality instead. Still, the optimists were abundant. Tech adviser Digi-Capital estimated early on that AR could be a $120 billion market by 2020.

CastAR proposed creating a headset that could overlay animated images in front of your eyes as you looked at a tabletop with a special reflective material. It was restricted in terms of what it could show you in a given space, but Johnson and Ellsworth believed it would work great for tabletop games. 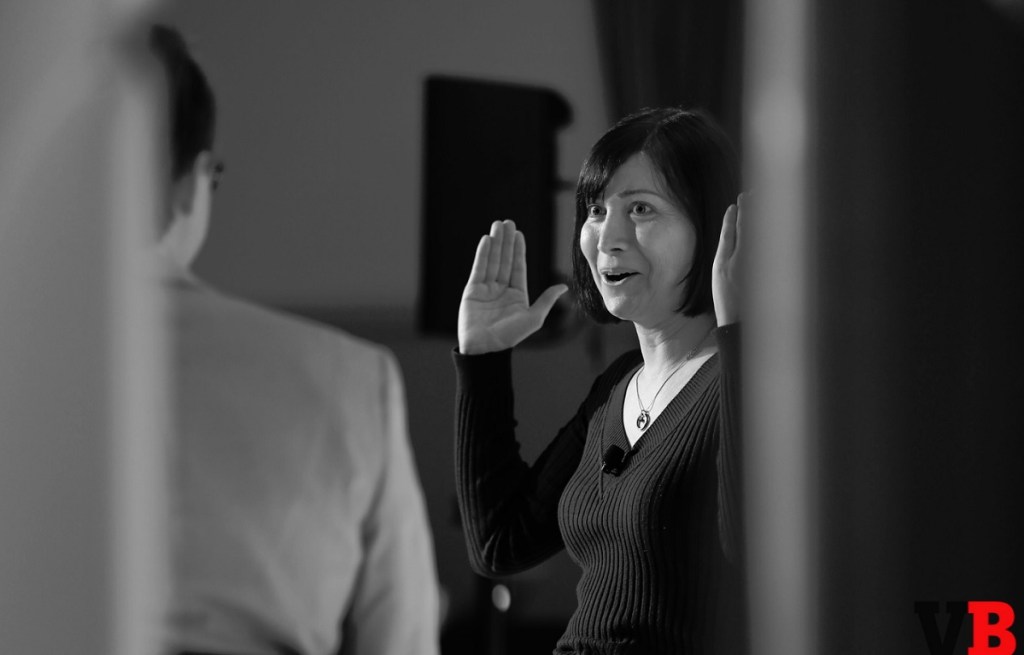 Above: Jeri Ellsworth of CastAR onstage at GamesBeat Summit 2016.

It’s still not clear exactly what happened, as Ellsworth hasn’t made any public comments. But it was clear that CastAR had a technology issue and a cost problem. On the cost side, it might have been able to create a $250 solution for tabletop AR gaming, but it was replacing tabletop card and board games that might have cost $25. It’s like the internet of things pet feeders, which cost $250 and try to replace, unsuccessfully, the $2.50 pet bowl.

Polygon reported CastAR shut down and laid off 70 employees because the company couldn’t find a new investor. Based on what we know, CastAR’s fate isn’t cast in stone just yet. One of the outcomes could be that someone could buy the assets. At least one developer, who preferred to remain anonymous, was told that the company is trying to sell its technology.

Ellsworth and Johnson spun out of Valve and they raised $1 million in a Kickstarter crowdfunding campaign in November 2013. I visited them early on, when the AR headset they were envisioning was a bulky prototype. Johnson’s home was impressive, filled to the brim with pinball machines and hardware prototypes that used a wand to make things happen in AR.

The aspirations of that time showed how far the tech had to go. It would be several generations of hardware before the company had something that it could place on the heads of consumers that was comfortable, lightweight, and dazzling when it came to animated graphics quality.

“They were making progress on launch titles,” said Kevin Krewell, analyst at Tirias Research. “The experience, even using a reflective mat was very good. The hardware was going to be much cheaper than most AR. I also saw one demo where a guy covered an entire inflatable dome with the reflective material and it worked well.” 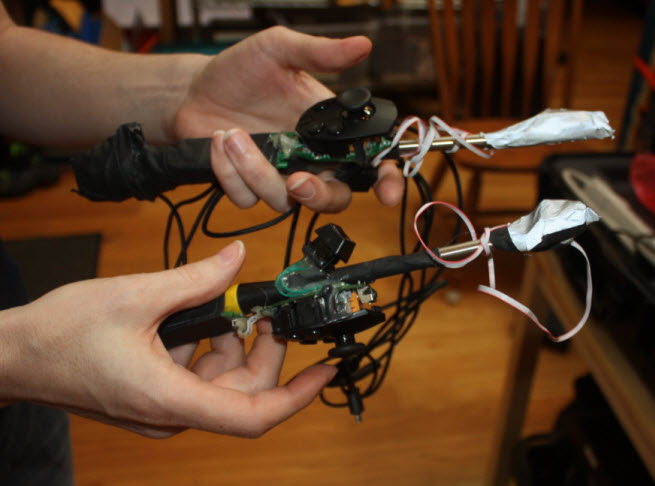 The obstacles didn’t deter Ellsworth or Johnson, who were staunch fans of science fiction and wanted to believe that serving early adopters would help them reach their eventual goal. The growth of events such as Augmented World Expo, which drew 4,700 people this month in Santa Clara, California, showed that a big industry with hundreds of companies believed the same things as Ellsworth and Johnson did.

“You can take a physical, tangible object, like a figurine, and put it down on the table,” Ellsworth said in a panel that I moderated at the Consumer Electronics Show in January. “Then the essence of the character jumps out to battle and level up. What’s interesting is that when you start having those types of experiences, this little plastic toy suddenly becomes mine. It has all these markers of the experiences I’ve had. I’m more connected to this physical thing than if it were just a digital object on a screen. The whole toys-to-life phenomenon is going to be taken to another level. Each of your little gadgets or toys will be unique to you, because it’ll be persistent.”

But AR experts such as Jesse Schell, head of the Entertainment Technology Center at Carnegie Mellon University, recently warned that AR would have big problems to overcome as far out as 2025. As he noted about Google’s original Google Glass project, AR glasses “look stupid,” and few people would willingly wear them on their heads. To do so, they would have to completely ignore the fashion sense people normally have about things like sunglasses.

On top of that — though it was less a problem with CastAR’s focus on tabletop games — AR makes people uncomfortable because it means you’ll be under surveillance by people wearing the headsets with cameras. And to Schell, that means there will be social obstacles on top of technological obstacles that hold the market back. 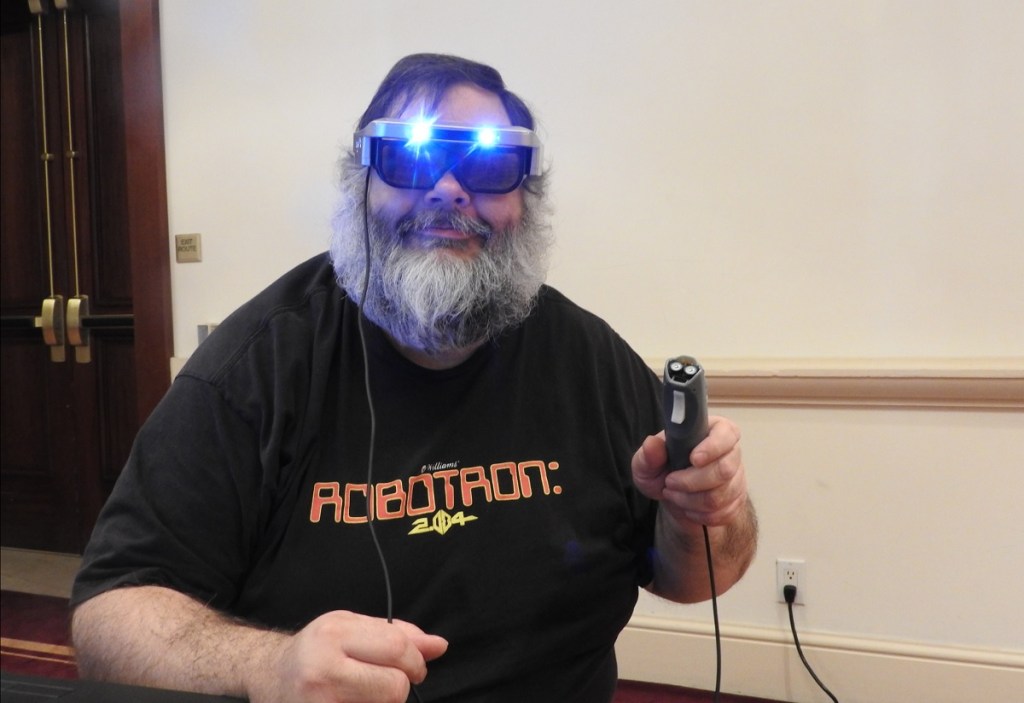 Above: Rick Johnson, cofounder and chief software engineer of CastAR.

In the meantime, it was clear that it was going to take a while just to get the technology right. The bulky headsets are the norm for now, and some companies such as Vuforia and Microsoft believe that AR will work best in enterprise markets, where the customers can afford to pay thousands of dollars for a solution. CastAR was simply early in choosing to focus on the consumer market, and it didn’t really have a way to survive the lean years, as some companies like Playful have proposed in terms of surviving the lean years of the cousin market, VR.

Schell also pointed out that AR needed more killer applications. Niantic’s Pokémon Go  took off in 2016 as the first major AR mobile game, earning $1 billion within a year. But veteran game investor Mitch Lasky warned a while ago that the success of Niantic’s game was likely not reproducible, and that it was due to pent-up demand for Pokémon mobile games.

As long as CastAR hit its milestones and convinced investors it was on the right track, it should have been able to raise money. After all, investors poured $2.3 billion into AR investments in 2016, according to Digi-Capital. But somewhere along the way, the investors must have gotten cold feet, and others failed to step in to keep it all going. And other AR rivals such as Magic Leap and VR companies may have snared those investors instead with even more grandiose visions.

It’s not the end of AR games, but the tale of CastAR is certainly a cautionary tale.

Above: CastAR demo, visualized to show what you see with the augmented reality glasses.