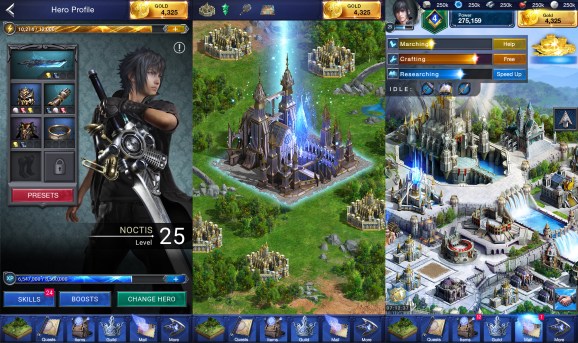 MZ, the developer behind mobile hits Game of War: Fire Age and Mobile Strike, has launched a Final Fantasy XV game for iOS and Android.

Square Enix has depended heavily on Final Fantasy for its mobile efforts. Final Fantasy: Brave Exvius has reached 23 million downloads as an original, free-to-play game, but the publisher has also ported classics like Final Fantasy IX to mobile as premium games.

Final Fantasy XV came out for PlayStation 4 and Xbox One last November. The open-world role-playing game became a hit, shipping over 6 million copies worldwide. A New Empire could attract those fans to the mobile app.

“We are delighted that the talented team at MZ, with a successful track record in developing and publishing global mobile games, has adapted the Final Fantasy XV universe into a mobile strategy game.” Hajime Tabata, director of Final Fantasy XV, said in a press release sent to GamesBeat. “I’m very pleased to be able to work with such an amazing partner on this new Final Fantasy XV, which players around the world will be able to enjoy together.”