It’s probably fair to say that if you’re a fledgling indie development studio casting around for signs of inspiration, good choices, and role models you’d be hard-pressed to find a better example than Grinding Gear Games, creators of action-RPG, Path of Exile. The studio, founded in late 2006 in Auckland, New Zealand, took its sweet time to release the game, but the patience and constant work paid off as it’s a certifiable hit commercially and among its legion of dedicated fans.

From a starting team of three the studio has ballooned to 100 developers all focused on the single project in front of them. They are still generating new content, and with it, encouraging new players to the fold while enticing lapsed players with smartly considered methods of keeping the experience fresh.

It all started with a love of Diablo 2

“We played a lot of online action RPGs like Titan Quest and Dungeon Siege, but especially Diablo 2,” says Producer and Lead Designer, Chris Wilson, “and as 2006 approached we felt it was strange that no studios were making games like this, specifically online, with good item economies.” Wilson and his early team knew that other studios were making games following some of the action-RPG tropes of Diablo 2 but whatever their intentions, those games ended up being single-player games. 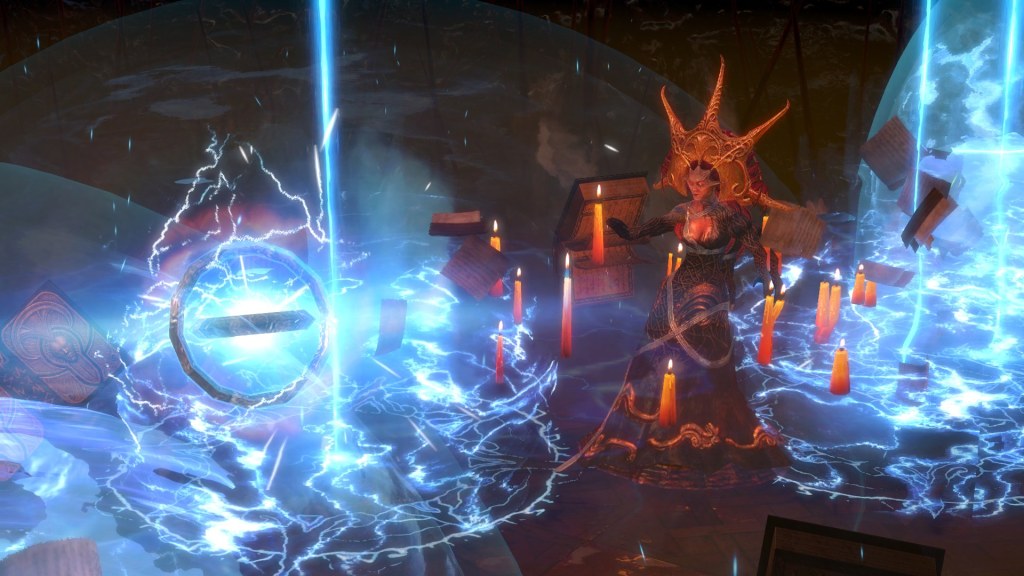 Above: Path of Exile springs epic visual moments into the action-RPG gameplay.

“We felt that Diablo 2 players were looking for something newer and we thought, somewhat naively, why don’t we make that game?” says Wilson. There was method in the apparent madness since none of these friends had ever put together a game studio before. “There was a hole in the market, tens of millions of players were looking for something to play, and we felt like we can do that,” adds Wilson. That concept of identifying a hole in the market that evidently had a fan base but wasn’t being satisfactorily served is a core concept that would prove vital in allowing Path of Exile to be a success. That, and a little talent, of course.

The early days wouldn’t be easy though. “We pooled our life savings, set up in a garage, and three of us started to make Path of Exile. It’s a survivor story, really, as we had to learn how to make games, scale a studio up to 100 people, but it was successful and it all came from a desire to fill a hole in the market,” says Wilson. “We knew it was the right product to make, we just didn’t know if we were capable of making it,” he adds.

From a design perspective, the team established pillars that would have to be adhered to for this game to be a success. “We knew to be successful it had to be an online game and that items had to be stored on the servers. These games thrive on the fact that they have items that are incredibly hard to obtain online, and players are willing to spend a long time to attain them,” says Wilson. 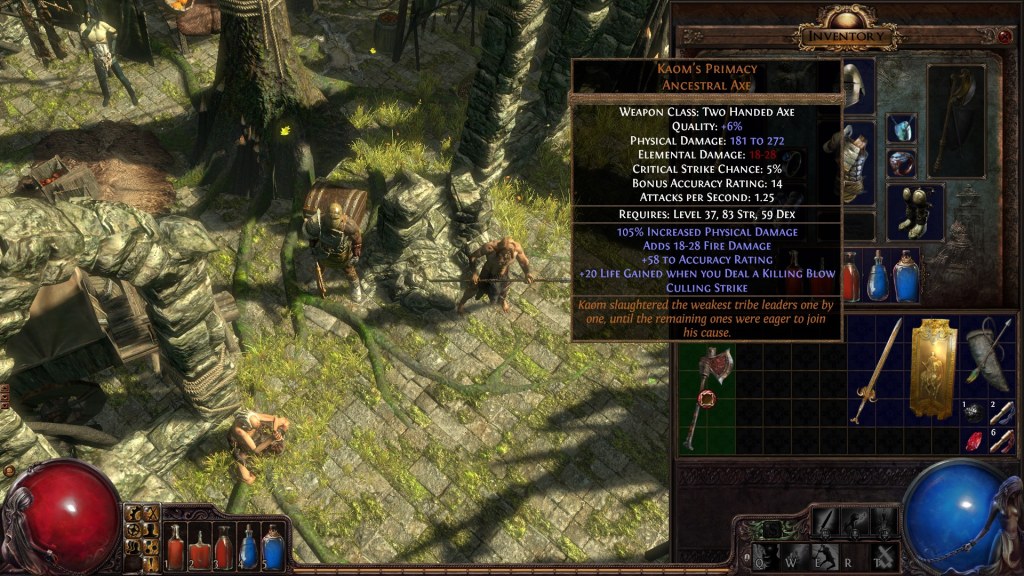 Above: Building a game with an absorbing item economy was key to Path of Exile’s design and success.

The next pillar dealt with requiring random levels and items to help retain players for the long haul. “It’s important for replayability that the levels are procedurally generated so that when you play through, it feels different,” says Wilson. In addition, staples of the genre like visceral combat that was also responsive and, as Wilson described, “punchy,” were the kind of standards that the Diablo crowd would both recognize and feel was core to their enjoyment.

These pieces would lead to an important goal. “We want people to play the game for ten years. And we already have players who are entering their sixth year, so that’s working well,” says Wilson.

As developers everywhere know, building technology while you’re building a game is far from easy. For the Grinding Gear team, there were no shortcuts. “At the time, there were no off-the-shelf online game back ends that you could just purchase. We needed the game to support tens of thousands of players online simultaneously. So, we looked at how other games architected and came up with a hybrid that we would build,” says Wilson.

As a result, every system was custom built for the requirements of this game. Wilson also revealed that it’s only this year that the team has investigated middleware options to help with new features like adding video into the game. 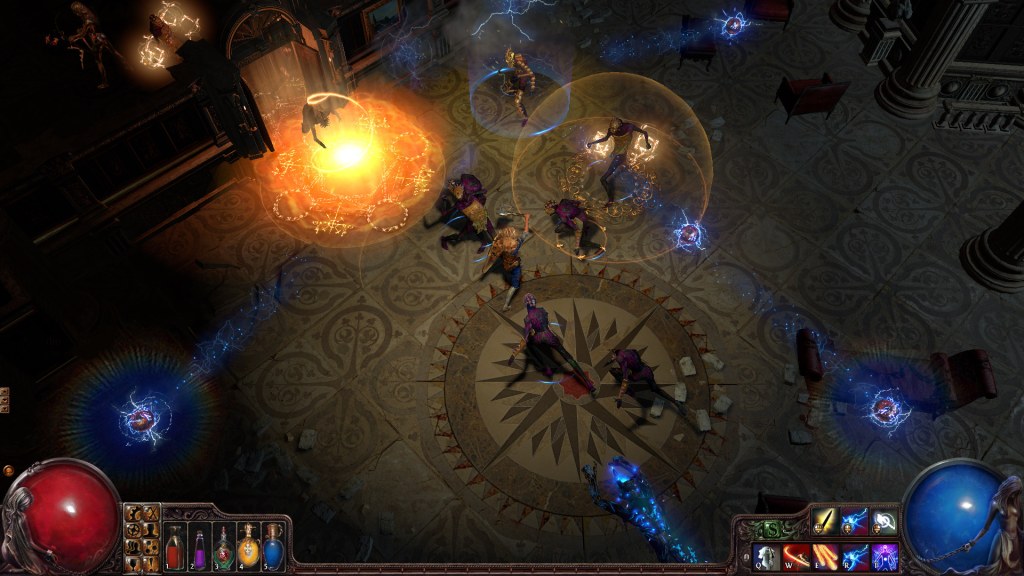 Given all this work, it shouldn’t be too much of a surprise that it took until 2013 before the game was officially in full release. Though the alpha period had generated an engaged community, building beyond that was a struggle with a traditional press tour resulting in positive plaudits and feedback, but only 2,000 additional people hitting the forums. “Now 2,000 people is nice, but nowadays you get that by just tweeting something,” says Wilson.

This slow-burn was frustrating, but the belief in the core product remained resolute. “Eventually the inevitability worked and it passed a quality threshold where people were willing to tell their friends,” says Wilson. It is also a commitment to let the game speak for itself that has stopped Grinding Gear from embarking on refer-a-friend programs and similar marketing techniques to attract players. Rather, they would prefer a more organic process whereby “a friend disappears and you wonder where they are. You discover they’ve disappeared because they’ve been playing this awesome game for six hours a day!” adds Wilson.

The randomized system — such a core part of the replayability — has also played well with the community and with YouTubers. “We call them the reddit moments,” says Wilson, “when the game does something interesting enough, the player will say ‘hey, that was cool, I need to post it on reddit.’”

Those moments might be action situations, but the randomized naming of items and monsters can generate its own comedy and, even, naughtiness. “There was a monster where the game generated the name Stink Stink, and so that of course has become a community meme.

“We quickly learned that while it sounded cool to have the word ‘black’ as a prefix so you could have cool names like Black Bane, it was way too quickly able to generate offensive stuff, so that had to be removed early in the beta!” adds Wilson. 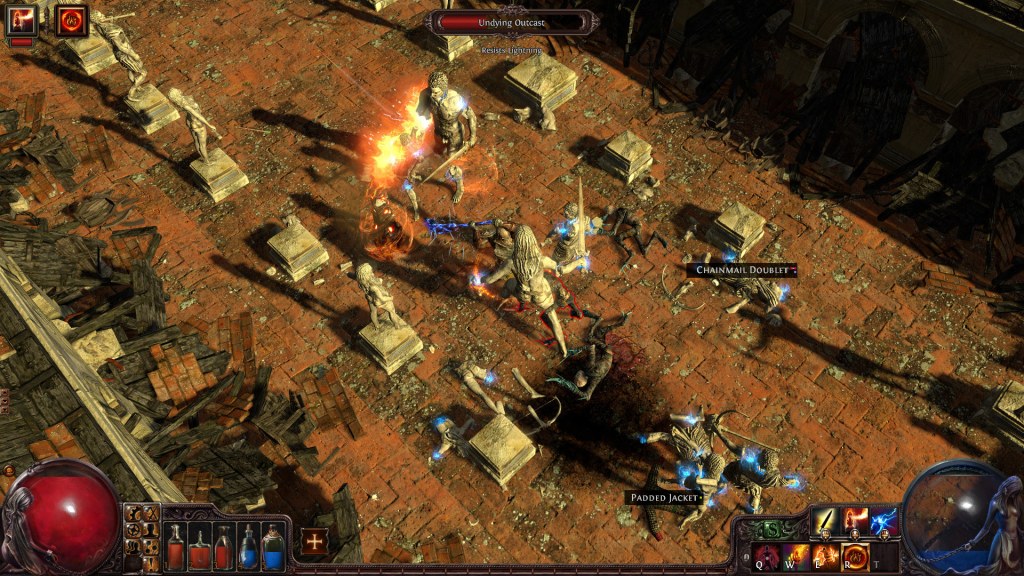 Above: The inspiration from Diablo 2 is quite apparent in the game style and layout.

The emergence of the streamer and YouTube community during Path of Exile’s development and release has certainly aided gamer awareness, but hasn’t affected any core design or feature set ideas. That said, Wilson suggested that the team have considered a few ideas to address the people who are helping generate awareness and extending the game’s reach.

“We have considered a game mode for streamers (or any user) where two streamers enter and they’re competing with each other in some way — probably not directly — like who gets through the maze first. Then their viewers have some mechanism for donating or voting that makes it harder for the other streamer. So, two rivals can have fun in friendly competition,” explains Wilson.

The business of free-to-play

Now approaching a full four years of full release, Path of Exile continues its upwards growth curve, buoyed by new content, daily news posts, and unveiling a new server every three months that keeps drawing players back. Wilson accepts that the game is now profitable, powered by its 100-strong development team. That scenario wasn’t always quite so apparent when this new studio started out with its game design dream. “It pretty much is a passion project. It started with ‘players want this game’ and only turned into the business of ‘okay, how is this game going to pay for itself’ a bit later,” says Wilson.

“We had seen games like Maple Quest be very successful in Korea, but nobody had really done a free-to-play model in the West,” says Wilson, “and our big revolution was to see if we could be the first free-to-play in the West. We weren’t because the game took forever to make.”

Wilson and his team did what he describes as “rough back-of-envelope math” to figure out the business model in those early days. “From surveying other games, we figured for every average concurrent user, you make about 50 cents a day. So, with 1000 people on average logged in, you’re making $500 a day. That obviously only pays for a couple of staff members. We looked into the logistics of what it’s going to take to run this online game with a skeleton crew, not making much content, and decided we needed 10,000 players logged in on average in order to pay for the game, so that was our goal — the 10,000 concurrent players mark,” reveals Wilson.

It turned out that Wilson and his team had the math wrong. Quite wrong! “You actually make a lot more money than that and you also require a lot more people. We have a 100-person team and we thought you could run an online game with six!” says Wilson. Fortunately for Grinding Gear, fans enjoying their game experience are willing to pay for the entertainment and, coupled with blowing the 10,000-concurrent number out of the water, the game is able to support that 100-person crew. 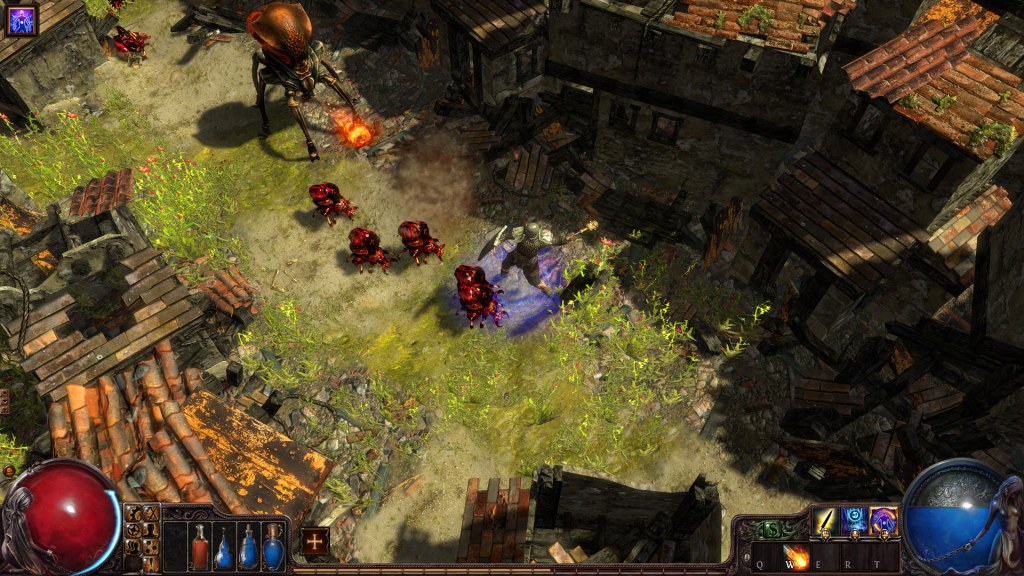 Above: The anticipated economics turned out to be quite different than expected once the game began to scale its concurrent players.

Wilson is clear that Path of Exile remains the total focus of Grinding Gear Games for the foreseeable future, with no plans to diversify into other games. “We have a lot of stories still to tell with Path of Exile,” he says, adding “We hear game ideas all the time and someone will say ‘we can make a game to beat Dota 2’ and I shake my head and go back into my office!”

Now if the studio were looking for opportunities — and they’re not — it would follow that same philosophy of finding an underrepresented genre with an established fan base. “It would be something like the old-school point-and-click adventures or the Command & Conquer RTS. Those are some of the areas that we would look at,” says Wilson, but also made it abundantly clear that no, the studio is not announcing work on any such projects.

Remaining focused on Path of Exile continues to pay dividends, as does believing that despite reports to the contrary, the PC continues to maintain its viability as a major gaming platform. There are lessons here for every development studio.