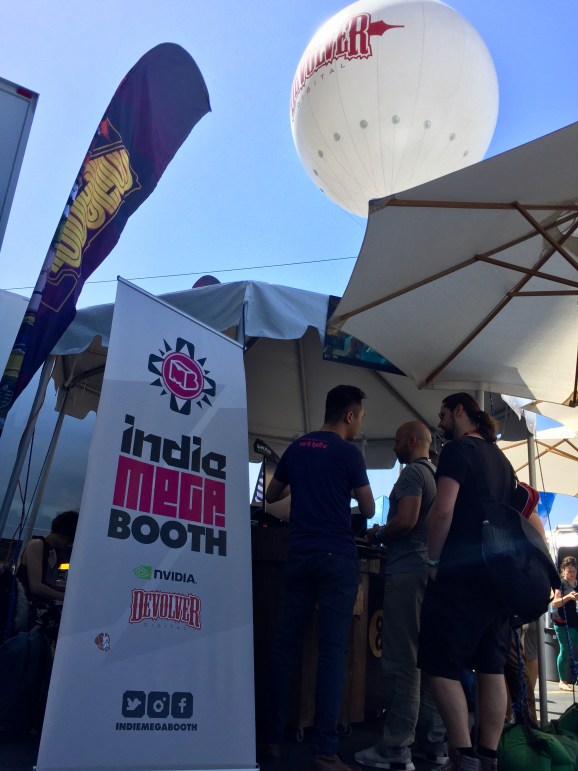 Ahead of the first-ever Megashow festival, the Indie Megabooth teamed up with publisher Devolver Digital to showcase independent games in a parking lot across from the Electronic Entertainment Expo proper. Larger-than-ever crowds swarmed the big bright booths in the Los Angeles Convention Center, hoping to get a chance to possess some dudes in the new Super Mario Odyssey or to punch some Nazis in Wolfenstein 2. Meanwhile, the Devolver lot was quieter, though no less celebratory, with nary a Rabbid in sight.

Kelly Wallick founded Megabooth in 2012, which functions as a popup that showcases indie games within larger events such as the Penny Arcade Expo (a convention for fans), the Game Developers Conference (one of the largest events that focuses on those who make game, not those who play them), and now E3.

“We’ve been doing that for the last few years,” said Wallick in an interview with GamesBeat. “We’d always been asked a lot of questions about, when are we going to do our own Mega-event, Megashow or something.”

So the fans ask, and so Wallick delivers: The very first standalone Megashow is on July 15 in Atlanta, which has early bird ticket sales until 11:55 p.m. EDT. It won’t be purely a games festival, though. Music and art will also be showcased, a move that Wallick hopes will make it more accessible, both because of the interdisciplinary content as well as plans to host the festival in a variety of locations.

“I’ve been really passionate about starting a series of local events that are stand-alone, that feature local developers, local partners, music, art,” said Wallick. “It’s basically just a block party celebration. That’s the idea I wanted. I wanted to connect local community members who might not be able to come out to something that’s all the way on the west coast or east coast, where they have to travel really far. It’s the same for developers and fans.”

In addition to being the self-proclaimed overlord of the Megabooth, Wallick chairs the Independent Game Festival and is a co-organizer of BitSummit, an indie game festival in Japan. As IGF’s chairperson, Wallick says that accessibility is a big priority.

“We’re pretty careful to try and make sure that we let a lot of different communities know about it, that we make the system pretty easy to use, that there’s a long amount of time for people to submit their games,” Wallick said. She pointed to how GDC has scholarships for folks who want to attend but might not be able to afford it. It’s something that she’s trying to do with both IGF and Megabooth. “A lot of companies – we’ve been doing this work with Megabooth as well – we advocate with bigger companies and sponsors to help cover some travel costs and booth costs for developers to get out here.”

When Wallick came up with the idea for Megashow, she also wanted the games that are approachable to a broader audience. Before founding Megabooth, Wallick worked in the sciences at MIT and managed a chemical engineering lab. When she transitioned over to the video games industry, she was attracted to indie games partly because of how many indie developers come from non-traditional backgrounds. Megashow’s ethos is to capture how indie games can act as a confluence of a multitude of different cultural influences and interests.

“Having a music and art component to it makes it a little more interdisciplinary, a little more well-rounded, so people aren’t just going to a hardcore game event,” said Wallick. “I like games, I like music, I like art. I have multiple interests. I’m sure there are other people who feel the same way about it. There’s so much cool overlap between all these creative pursuits.”

Megashow partnered with Adult Swim and Sony, two companies that publish fairly divergent titles. Adult Swim Games are weird and the wacky, like the virtual reality app Rick and Morty: Virtual Rick-ality and Kingsway, a role-playing game with a Windows 95 interface. And Sony is, well, Sony — a blockbuster triple-A titan, maker of the most popular home console, and billion-dollar company. But as recent years have evidenced, companies like Microsoft and Sony now value indies as an important industry drivers.

“You can connect on these really personal levels and experiment in ways that aren’t available to triple-A. On the flip side, triple-A can do a lot of cooler stuff with their budgets that indie devs can’t,” said Wallick. “It’s the same thing. Triple-A and indie developers aren’t hating each other when they see each other. Everybody’s working together on these things. They all care about it. Keeping the ecosystem healthy and interesting for consumers, as well as good for the industry side.”

In addition to indie games, music, and art, Megashow will feature four virtual reality titles: Google’s Tilt Brush, a VR art tool; Chroma Lab by Sean Tann, a colorful experimental experience with light; a music video by Tyler Hurd and Viacom Next for “Chocolate” by Giraffage; Space Pirate Trainer, a shooter by I-Illusions.

Wallick is most excited about the showcase of alternative hardware and installation work, though. It’s something she championed as IGF’s chairperson with the alternative controller award. That award is given in partnership with the Alt.Ctrl.GDC showcase from John Polson and Simon Carless, which accepts game submissions that use “unconventional, accessible, or alternative physical controls.”

“We get a lot of people who want to submit those kinds of games into IGF and into the Megabooth, but it’s hard to judge them, because physically there’s only controller, or one arcade cabinet,” said Wallick. She’s hoping that in the future, a “high-level version” of the festival will be able to pay part of the proceeds to developers to help support experimental work that has trouble generating sales.

“Things that are hard to sell to a general audience on Steam or something. But when you see them at an event or a party, it’s the coolest thing anybody’s come across,” Wallick said. “I’m excited about making that connection between audiences and that kind of content. I miss arcades. I miss that kind of community feel around playing games. I want to revitalize that a little bit.”