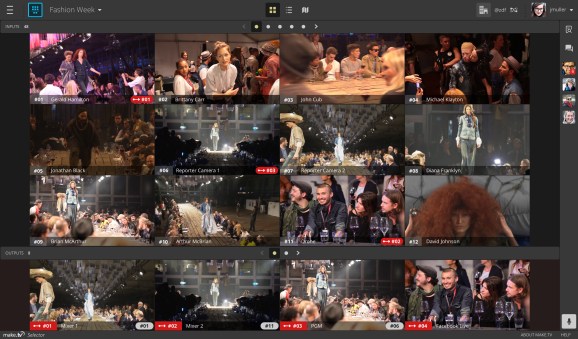 The startup provides a cloud-based video router that feeds various live streams directly into the broadcaster’s control room. Producers can acquire and curate content from smartphones, professional cameras, and social video feeds like Facebook and Twitch, and distribute them on their channels. They can do so live or store the content for later broadcast.

“High quality live broadcasting currently relies on expensive proprietary systems and physical equipment, which limits contributions,” said Make.TV cofounder and CEO Andreas Jacobi, in an exclusive interview with VentureBeat. “We’re helping publishers and broadcasters to be more dynamic, as they can now take advantage of the fact that almost everyone can be a high quality live broadcaster, either with their smartphone for news and sports or with their game platform for esports.”

Make.TV charges a monthly subscription fee based on the amount of incoming feeds and outputs. For now, the startup focuses on professional contributions but sees independent contributors — like people in the audience and viewers — as becoming a big part of its business. With regards to copyright issues, Jacobi explains that it’s up to the broadcaster to define sharing rights.

Voyager Capital’s Erik Benson has been tracking the digital video space for over a decade. “Our investment thesis back in the early 2000s was that software would replace hardware in the processing of videos,” he told VentureBeat in an exclusive interview. The Seattle-based VC firm invested in video processing platform Elemental Technologies back in 2008, which recently got acquired by Amazon Web Services.

Make.TV will use the new money for sales and marketing, hiring, and continuing its expansion in the U.S. The Cologne, Germany-based startup recently relocated to Seattle, where it is now headquartered.