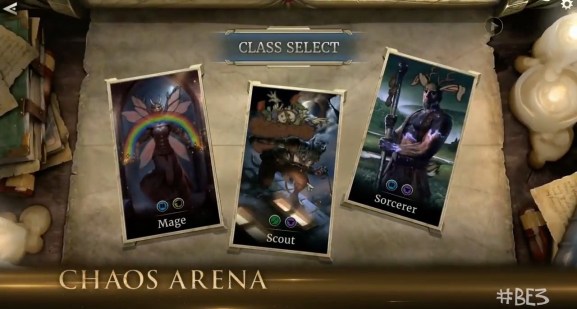 The Chaos Arena turns The Elder Scrolls' normal draft mode into something ... off-kilter.

It’s an exciting time to enjoy card games on your PC. Market-leading Hearthstone, is addressing problems (some of which are long-standing issues, like duplicate Legendary cards). The Elder Scrolls: Legends added its first expansion, Heroes of Skyrim, bringing more than 150 cards (and lots of dragons!) to the game. The Witcher-based game Gwent is gaining steam, and Fable Fortune is twisting the rules of Magic and Hearthstone in its closed beta right now.

It’s a market that could hit $1.4 billion this year, market researcher SuperData projects, and it’s getting bigger.

I’m a sucker for each of these. Hearthstone has claimed more of my gaming time than anything else since its release in 2014. I play it on the train, while taking walks, and in the car (when I’m in the passenger seat, of course). I hit up Elder Scrolls Legends after I finish my daily quests in Hearthstone, and then I move into Fable Fortune. In the past, I’d play some SolForge, too, but it’s kinda of a mess after it almost died before executives at Grinding Gear Games (the folks who make Path of Exile, the online action-RPG in the spirit of Diablo II) saved that game from shutting down.

I’ve dabbled in some others, too: Shadowverse, Star Realms, and Hex. Shadowverse’s anime style turned me off. Star Realms is good, but it does have the same competitive hooks. I enjoyed Hex’s single-player mode, but my scant collection made the rest daunting to me.

But it’s OK that I don’t like all the cards games (and my wife and wallet agree with this, too!). And as we’re seeing with Fable Fortune, this market has plenty of room for innovation. Card games could find a home on consoles with the Nintendo’s hybrid portable Switch, and who knows what AR and VR could mean for this industry.

P.S. The tyranny of Patches the Pirate invades this week’s Tavern Brawl in Hearthstone. It’s a 7-gun salute.

Hearthstone weakens one the game’s most hated cards

Hearthstone’s Quest Rogue players might actually want to find a cave to hide in after hearing the news of Blizzard Entertainment’s changes to the controversial The Cavern Below card. The publisher of the market-leading digital card game said it’s weakening one of the most-talked about cards from Journey of Un’Goro: The Caverns Below. It will […]

Diablo III came out in 2012. Blizzard is now adding a new character class can keep the game running and earn it some money without having to release a full-on expansion for the aging game. The Rise of the Necromancer pack came out on June 27 for Diablo III on PlayStation 4, Xbox One, and […]

Dungeons & Dragons is “clicking” with players worldwide in new ways thanks to livestreaming on Twitch, the renaissance of tabletop games, and a fantastic 5th Edition that gets better with every new storyline that Wizards of the Coast releases. The publisher is now looking to Codename Entertainment for the latest D&D video game: Idle Champions […]

The infrastructure tool that enables many of the best mods for Grand Theft Auto IV and GTA V could return after the Rockstar Games studio and publisher Take-Two Interactive sent a cease-and-desist order to the people who distribute that software. Rockstar Games has posted a new policy about single-player mods that opens the door to the return […]

Xbox fans hate ‘parity,’ but I want it after playing PlayerUnknown’s Battlegrounds

Bungie confirmed at E3 (the Electronic Entertainment Expo trade show) in Los Angeles last week that its upcoming sci-fi shooter Destiny 2 will run at 30 frames per second on all consoles. That includes even the far more powerful Xbox One X from Microsoft, which has the horsepower to render the game faster than PlayStation 4, […]

Nearly 9 million people log in every day to the text/voice chat service Discord, and the bulk of the 45 million total registered users are there to discuss games. An increasing number of developers are creating their own Discords, which they’re able to use to build an audience, garner feedback, and form bonds with fans. Some studios have found a way to integrate Discord more tightly into their dev cycle, creating an engaged and active community months or years even before a game comes out. (via Gamasutra)

Women remain a minority in the esports industry, but they have always been a presence in competitive gaming scenes. Compete’s video team interviewed four female esports experts about their successes, their struggles, and their different takes on competitive gaming’s gender disparity. (via Compete)

Bioware’s Anthem is Like Star Wars, Don’t Think Too Hard About The Science

If you’re a science fiction nerd, you may have hard questions after seeing the E3 trailer for Bioware’s Anthem. What powers the Freelancers’ powerful Javelin exoskeletons? With those crazy Shaper Storms, why is there wild life on the planet at all? Well Bioware wants you to leave those questions behind. (via US Gamer)

The biggest mod for Morrowind celebrates 16 years in development, and counting

In the last 16 years, over 600 modders have contributed thousands of new assets – including everything from art and music to complete towns and cities – to Tamriel Rebuilt, a community that’s constructing a mainland for The Elder Scrolls III: Morrowind, whilst preserving the game’s creative vision and direction. To celebrate 16 years of the community, the team has released a new teaser showcasing the latest version of the mod. (via PC GamesN)