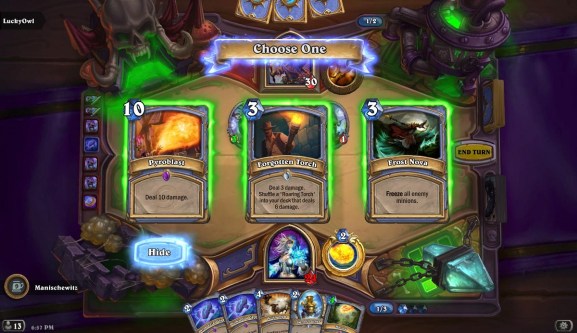 A Pyroblast for 8 mana? Why, certainly!

Every set that Blizzard’s Team 5 design group introduces to Hearthstone has a handful of cards that players love and hate: Think Dr. Boom, Reno Jackson, or Patches the Pirate. These are all Legendaries, the rarest of the game’s cards, and you can have just one copy of each in your deck. But one of the current set’s most disliked cards isn’t one of these ultra-rare cards (though this one is).

One of Journey of Un’Goro’s most hated cards is Primordial Glyph, a Mage spell. It’s an Epic card, thus it’s not that hard to acquire, and at 2 mana, it’s cheap. Combine it with its power — Discover a spell, then reduce its cost by 2 mana — you can see why it’s drawing ire. Not only could it give the caster a 1-cost Frostbolt, a 4-cost Blizzard, or an 8-cost Pyroblast, Primordial Glyph doesn’t give the opponent any information on what the spell could be. So foes have no idea what to prepare for.

I asked Hearthstone principal game designer Mike Donais if Blizzard had any intentions to change Primordial Glyph to give opposing players some clue as to the card the caster draws.

“It is really challenging to play around Primordial Glyph. Balancing the odds of each card coming out is really tough. However, looking at the data, the power level of the card is medium, so at this time, there is no intention to adjust Primodial Glyph,” Donais said. “In addition, lots of people are enjoying playing the card. If we get a lot of negative feedback in the future, we can discuss changing it like we did with The Caverns Below.”

I followed up by asking if even if Blizzard sees Primordial Glyph as a card with a medium power level, does Blizzard worry about how a number of players — including some highly regarded streamers and esports competitors — don’t like how little information it gives them. Donais dove into the role randomness and skill play in card games such as Hearthstone.

“Powerful random effects have always been part of Hearthstone. When we don’t have cards that provide a varied gameplay experience, games can sometimes feel ‘same-y.’ People sometimes mistake randomness and skill as being on a scale, where having more of one means you end up with less of another. That’s just not true; you can have high-skill high-luck games and games that have low-luck and low-skill,” Donais said. “You really need to be great at problem solving when games play out differently every time, since you have to figure out how to use a new set of cards and apply them to their maximum efficiency in each game. When you know exactly what will play out, you only need to solve the problem once, and then execute that solve every time you run into the situation.

“That’s not to say all forms of randomness are good for Hearthstone, but this kind of randomness, which gives players opportunities to adapt and make decisions, feels great.”

Well, it may not feel great to everyone. Just ask Hearthstone pro player Navi of the Gale Force esports group.