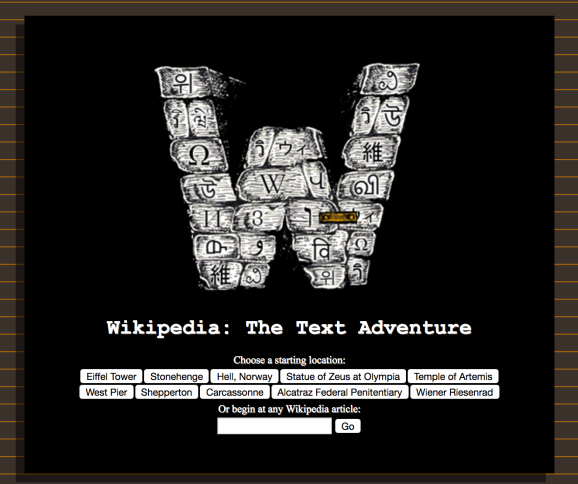 Like a lot of people, I’ve spent hours clicking from link to link, sucked into Wikipedia’s endless void of information. Indie dev Kevan Davis apparently has as well — except he came out on the other side with a game. Wikipedia: The Text Adventure is a free-to-play piece of interactive fiction that uses real entries to create a virtual world to explore.

There are already a few informal Wikipedia challenges floating around out there, such as Wikirace. It also goes by The Wiki Game, WikiLadders, or the cheekiest name yet, Wikispeedia, and you play it just by applying certain rules to Wikipedia pages. A page serves as “home base.” Players then start on a random page and try to reach home base by leapfrogging from one page to the next. The person who reaches it in the fewest clicks or fastest time wins.

Davis’s game is different — a slow, contemplative, curated travel guide to what at first appears to be a truly lonely planet. It expands on some of the experiments and themes in one of his previous works, Around the World in X Wikipedia Articles, a 117,000-word novel based on Around the World in 80 Days and generated with excerpts from Wikipedia using software.

“At the time I experimented with autogenerating a standalone text adventure along the same lines, but even a single small city quickly ballooned into enough articles to overload the compiler,” said Davis in an email, comparing the two works. “Today’s game generates itself piece by piece, instead, as the player moves around.”

In my first playthrough, I felt an almost off-putting sense of distance to the descriptions of places. The start screen offered me a few different options for where my trip could begin. When I clicked on Austria, I got a dry description of its famous ferris wheel, a recitation of facts such as its height (it’s 64.75 meters tall) and its exact location (Leopoldstadt, the second district in Vienna). I then had a few options to go to different locations, each as plainly described as the last.

It didn’t feel like the kind of experience that tries to make itself approachable or comfortable; instead, each location I visited felt cold and alien. But on the second playthrough, I noticed that there was a terminal prompt at the bottom and realized I could interact with it beyond just shuffling from city to city.

On Easter Island, I typed: “Examine statues.” The game responded with more information — still generated from Wikipedia, still dry — but it was something.

Twitter tells me that there’s further interactions available if only I had thought to try them:

and talk to people

Some descriptions are accompanied by a staticky pixel art image, which Davis said is inspired by the 1980s text adventures of his childhood. “It’s also nice for making some of the bad photos and boring architecture look a bit cryptic and fantastical instead,” he said.

The low-fi art also fits the feeling of the game, since it almost looks like the details have been smudged out and all that’s left is a vague outline of this landmark or that monument. While at first, I felt like the game was about stripping away all the usual human elements of travel, the interactions made me think that maybe the point of Wikipedia: The Text Adventure is that it takes an effort to make any real sense of a place while traveling. Davis said that the game is about players setting their own challenges, defining their own paths.

“I always enjoy how different the same data can feel when you look at it from a new angle, or fit it into a framework that it wasn’t really intended for,” said Davis. “Wikipedia is always a magnificent rabbit hole of links, and the text adventure adds a few that weren’t quite there, a way to stumble into bits of history that were right next to something familiar, without otherwise having any connection to it.”