A group called Gaming Ladies scheduled a women’s gaming event in Barcelona, Spain, but the event’s sponsor, King, the maker of Candy Crush Saga, decided to shut down the gathering this week due to harassment by trolls.

That prompted Rami Ismail, a prominent indie game developer and cofounder of Nuclear Throne developer Vlambeer, to condemn the harassment that led to the shutdown. He did so at the beginning of his talk at Gamelab, an international game industry event in Barcelona. The incident is the latest in several years of harassment issues in games tied to the reactionary hate-mob Gamergate movement, and it comes shortly after feminist Anita Sarkeesian faced hostile YouTubers at the recent VidCon event.

Internet trolls reportedly threatened to crash the July 27 women-only event by cross-dressing as transsexuals and disrupting the proceedings. The offended men didn’t like that the event was for women only. It isn’t clear why the event was met with such hostility in Spain, as such events are common in other places around the world. But it only reinforces the need to have these kinds of events in all regions of the world, as the support for women in games can be uneven.

We asked King for a comment. The company told another game journalist (message in Spanish below) that it was supportive of diversity but that it had decided to postpone the event because of negative comments that it had received. 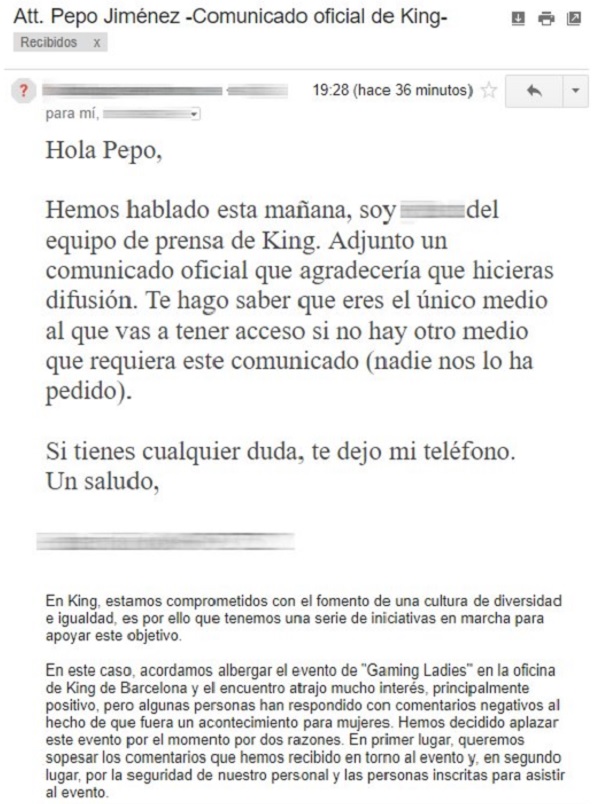 Above: King’s statement in Spanish explains why it canceled a women in gaming event.

At King, we’re committed to fostering a culture of diversity and equality and have a number of initiatives in place to support this goal.

In this instance, we agreed to host a ‘Gaming Ladies’ event at the King office in Barcelona and the event attracted a lot of interest, mainly positive but some people had negative feedback to the fact it was an all-women event. We have decided to put this event on hold for the moment for two reasons. Firstly, we want to consider the feedback we’ve received around the event and secondly, for the safety of our staff and people registered to attend.

Ismail said the event was set up to be a safe space for women to talk about the industry.

“Special interest groups exist in the industry,” he said. “We can learn from having open and honest discussions about shared issues. Groups like this exist for C++ developers or orchestral music. They can talk about issues in a safe space without the worry of harassment. That’s no different from an event like this for women.”

He said this would reflect badly on the Spanish game industry.

“I don’t care if you agree or disagree with them,” he said. “What is important is that you show your support for events like these, to show people who are passionate about games, that our industry is welcoming and safe. Game development is affected by this. This is damaging. This news goes around the world. How professional is this industry if people can’t go to a meetup safely? That’s not the fault of the organizers. That’s the fault of the harassers.” 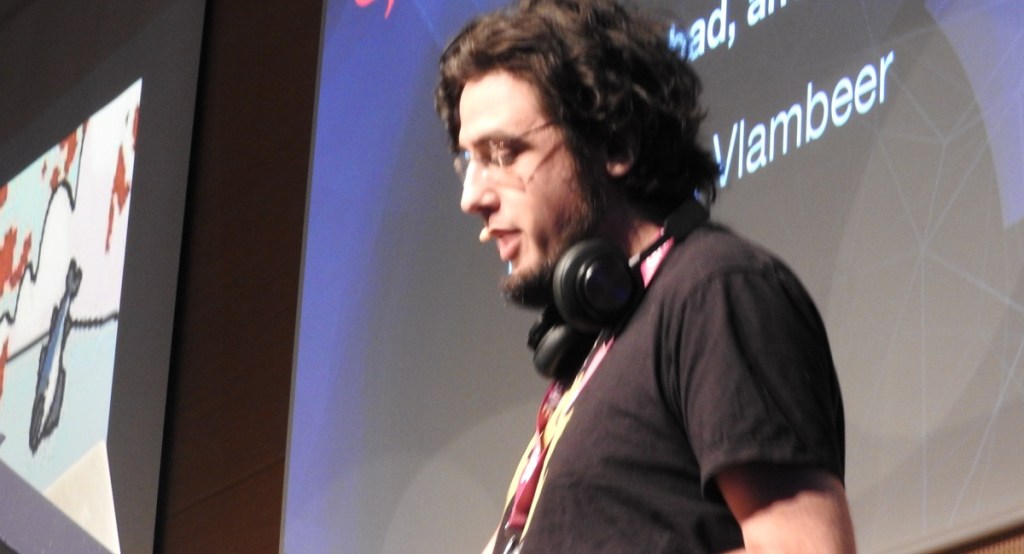 Above: Rami Ismail of Vlambeer addresses game developers at Gamelab in Barcelona.

He said that gamers and game developers shouldn’t defend harassment, “even by accident.” He said the should show that game development is for everybody, and that everyone should fight for the perspective of “game developers who are less powerful than us.”

“That is what I ask of you,” Ismail said. He got a strong round of applause in the crowded room, which had mostly male game developers.