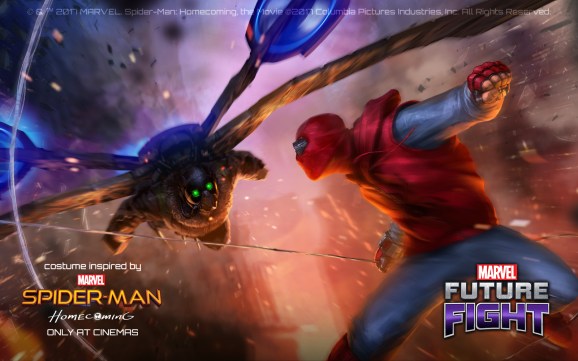 Marvel and Netmarble‘s hit mobile game, Future Fight, is celebrating the release of the superhero factory’s latest movie, Spider-Man: Homecoming. This bit of cross-promotion can help grow attention for the film ahead of its July 7 release while bringing new players to the fighting game.

The content includes two new costumes and six new characters. Some of Spidey’s most recognizable villains make up the new fighters: Sandman, The Lizard, Kraven the Hunter, Rhino, Mysterio, and Vulture. The new costumers come straight from Homecoming and give alternative looks for Vulture and Spider-Man.

The South Korean-based Netmarble has found success by working on licensed games like this and Star Wars: Force Arena. It has also brought the popular massively multiplayer role-playing game Lineage 2 to mobile.