Sword Legacy: Omen is a gritty re-imagining of the legend of King Arthur, packaged as a turn-based strategy game with optional world exploration. It’s a collaboration between Firecast Studio and Fableware Narrative Design, two small indie studios in Brazil. Brazil is now the largest market in Latin America, and is expected to generate $1.3 billion this year, according to market analyst Newzoo. The international community has taken notice, as Firecast and Fableware recently signed a publishing deal with Team17.

“Sword Legacy is inevitably an international product, but it arises from the partnership of two independent Brazilian companies, each with their own expertise,” said Protasio in an interview with GamesBeat, “and then we partnered with a publisher from England to also offer us their expertise and help us take this all over the world.”

In true international fashion, the partnership arose at the Quo Vadis games conference in Germany, where Team17 CEO Debbie Bestwick was speaking. Protasio attended the conference, and when he spoke with Bestwick, learned that the publisher had seen their game at previous events before, such as South by Southwest in Austin, Texas.

The importance of international

Even while developing the story, Fableware and Firecast were thinking beyond Brazil. Sword Legacy is set in Broken Britannia and plays on Arthurian legend, including characters such as Merlin and Uther, King Arthur’s father. Partly because of the story and partly for business reasons, the studios wrote everything in English first, though translating it to Brazilian Portuguese is a high priority for them.

“We need to have a business-oriented production,” said Protasio. “We know that writing it in English makes it easier to translate, from day one, into other languages. But we also realize that if we work with cultural aspects that are English as well, from Britain for example, we know we’ll be able to create a stronger cultural connection.”

This kind of awareness of the international market is a must for Brazilian indie developers, according to BIG’s executive director, Eliana Russi. When she first started the festival, she found that one of the key needs was access to publishers, distributors, and a wider audience abroad.

“We realized that even with a small games scene [in Brazil] at the time, most companies were developing their games in English,” said Russi. “They were already considering self-publishing internationally.” Challenges of developing in Brazil

For Sword Legacy’s team, there’s both good and bad pressure exerted on Brazilian indie studios as they attempt to go global with their games.

“A lot of people take a look at Sword Legacy and say, ‘Wow, this is a Brazilian game? I wouldn’t have thought,'” said Protasio. “That’s awesome on one side, because people are actually saying, ‘This is amazing, you have an international quality product. You’re probably going to be able to compete internationally.’ That’s what we’re striving for. On the other hand, it means that a lot of consumers view Brazilian games negatively.”

Aside from the stigma, there’s the ever-present issue of funding. Local games studios have tried crowdfunding platforms, but it’s difficult to acquire venture capital backing. The recent opening up of film and TV government funds for games studios has helped to some extent, but money is still tight.

“Brazilian people are a very creative people, but without enough money to invest in your game, you don’t have the space to make a mistake,” said Lanzarotti. “So I think that kills the opportunity to be creative. You can’t take any risks. If you have $100,000 to make your game and you want to try something different, that’s very risky. Brazilian developers have to go in a way where they know what’s going to happen.”

Taxes are another barrier of entry, which can deprive developers of access to the hardware they need. The Nintendo Switch, for instance, was the top console in the U.S. in April, but it’s noticeably absent from Brazil.

All these challenges again reiterates the necessity of Firecast and Fableware collaborating and targeting an international audience with their title.

“This is an interesting representation of what, I think, is the future of entertainment and creative products,” said Protasio. “Firecast started with a project, as a game development company. They were focused on prototyping, on game design, on creating a fun interactive experience. When we were brought on, Fableware, we’re focused on narrative design.”

The partnership with Team17 only validated the work that went into Sword Legacy.

“A British company buying our vision of the Arthurian legend is incredible,” said Lanzarotti. “We’re very happy with that.” 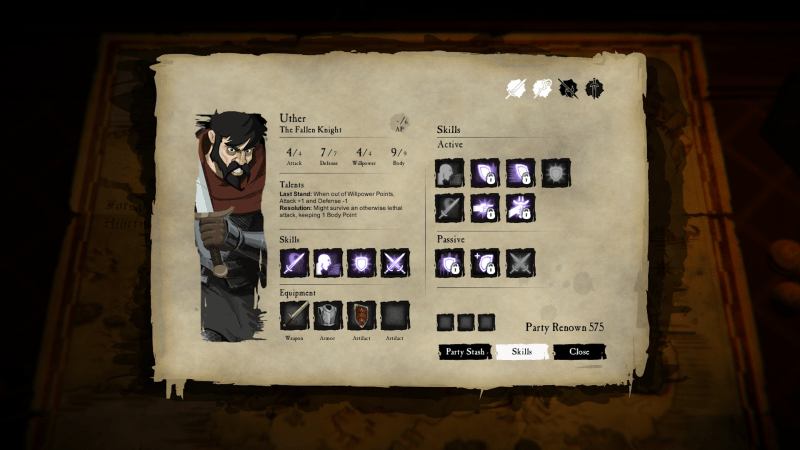 Building a world and IP

Sword Legacy unfolds over 11 main levels, each with mission objectives and a focus on the environment. Players can customize each of the four characters on their team, shuffling through 10 skills that you unlock for each. They can also decide who will lead the team as they explore and pick up loot, which can have an effect on battle order if they’re ambushed. Some skills and characters are better suited for manipulating the environment — such as flammable barrels, which can be detonated or moved around — and the player’s party can gain an advantage if it attacks from higher ground.

Scattered throughout the levels are documents that contain snippets of world lore, something that’s optional for those who are interested in learning more about the “candlepunk” world. Candlepunk, Pine says, is something he discovered in his research that’s akin to steampunk only set in medieval times instead of the Victorian era.

“We thought it was a good fit for our medieval world, especially the alchemical undertone we have. We have lots of potions in the game, and the potions always have side effects,” said Pine. “The player can try a potion that will increase their health, but it also might reduce their attack stat, or increase defense but reduce attack, or whatever.”

Sorcery is less common in Sword Legacy, where alchemy and blood magic take precedence. It abides by the grim atmosphere, where willpower is something that players can exploit for extra moves or super-powered attacks, but can also result in stress and loss of control and affects both heroes and foes alike.

Citing games like XCOM and Darkest Dungeon as inspiration, Lanzarotti said that they studied the best mechanics from those games and also tried to expand on what those games did. A large part of that was to add more exploration and character-centric content.

“You find some kind of mysterious object, and if you decide to take the barbarian, for instance — he’s a foreigner – he might look at it and say, oh, I didn’t realize this existed in Britannia,” said Pine. “You learn a bit about that character because you decided to bring him with you.”

Ultimately, they wanted to combine gameplay and story to create strong intellectual property that could lend itself to future transmedia opportunities. The team noted possible spin-offs ideas such as comic books or an animated TV show as options they would be interested in exploring in the future.

To that end, the team has spent time on building out the Sword Legacy world through the details. Protasio says they were even working on a story bible at some point for a possible animated show. In the game itself, the documents and little bits of dialogue between characters in the cut scenes show their various personalities and moral alignment.

“We wanted to create a strong IP. We felt like if you don’t have a strong IP and a good narrative, you don’t have a very interesting game,” said Lanzarotti. “We decided to go this way with the combination of exploration and battle and a mix of skills to make a different turn-based game, with a strong history, a strong universe, so we could make other games, or comics, or animation.”