At Pixonic, we went from thousand-dollar ads to million-dollar monthly marketing budgets. This article will lay out some of the concepts and solutions we use in marketing our game, which may be helpful for you as you make your free-to-play game bigger. We didn’t start with those principles, we spent tens of millions of dollars while trying and adjusting different approaches.

Here’s what we learned.

Cohort analysis: effectiveness from A to Z

To assess ads’ effectiveness, we rely on the ROI (return on investments) indicator, which we consider to be the ratio of total revenue divided by the cost of user attraction (ROI = income / Cost x 100%, which is equal to ROI = ARPU / CPI X 100%).

You can use your own analytics or rely on third parties, such as AppsFlyer, Adjust, Tune. Your main goal is to collect and interpret data per cohort, as that lays the foundation for everything else. In 2011, when we released our first mobile game, Robinson, there were no solutions to measure ROI by cohorts or separate adv sources, but fortunately that’s no longer the case. 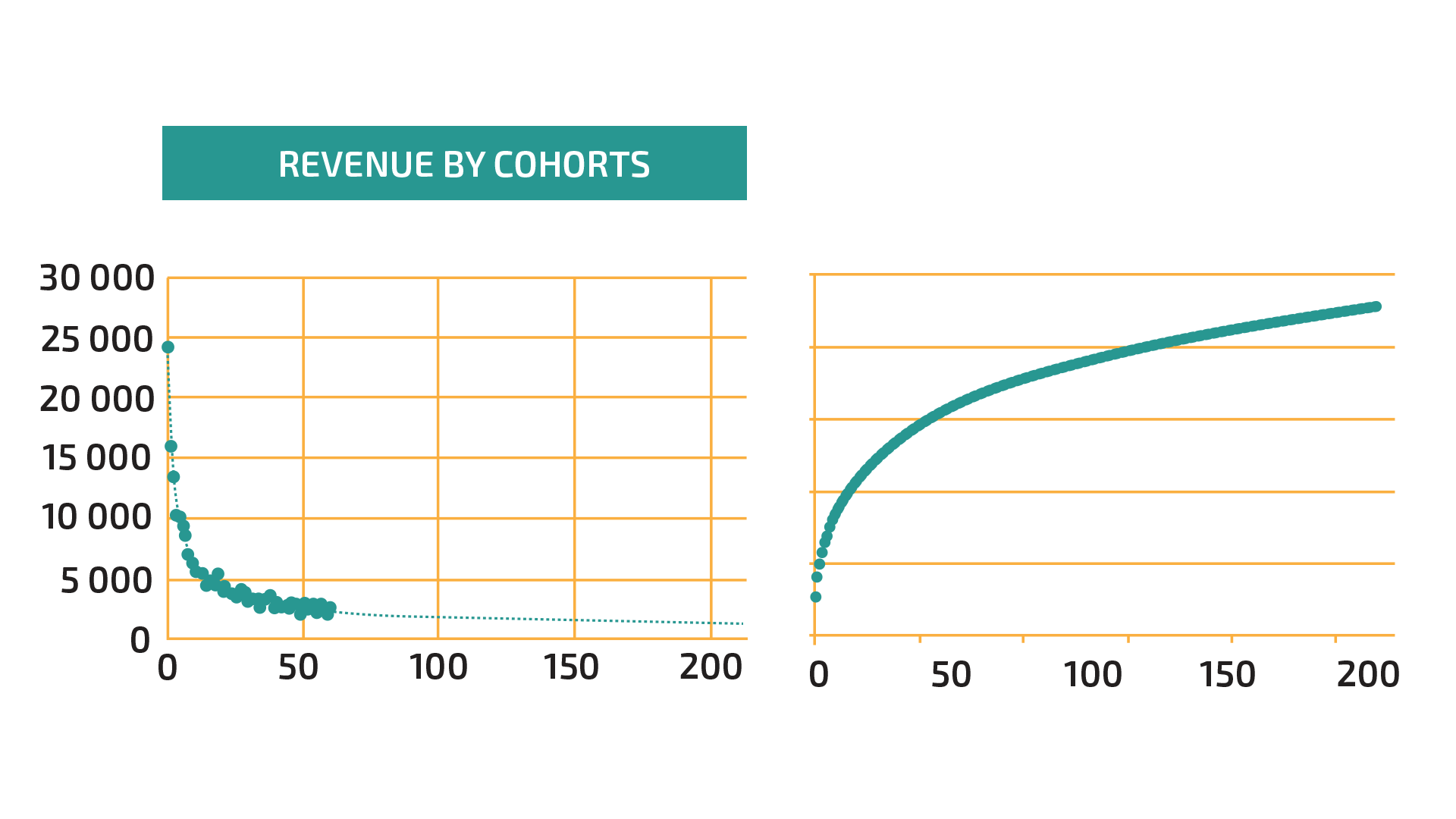 The graph on the left represents revenue from a given user cohort (counted by total days from registration), while the accrued revenue curve is on the right. If you divide the latter by the number of users in a given cohort, you’ll get ARPU (Average Revenue Per User); if you divide it by user attraction cost, you’ll get ROI. As such, you can obtain a cohort’s ARPU and ROI values up to an exact date.

The cohort graphs indicate that we get different values on different days. We measure the actual accumulated ARPU on the third-fifth-seventh-14th days following a product launch, and use that data to generate ARPU (and/or ROI) projections for later dates — the 30th-90th-180th day, and, if needed, on the 360-plus day. 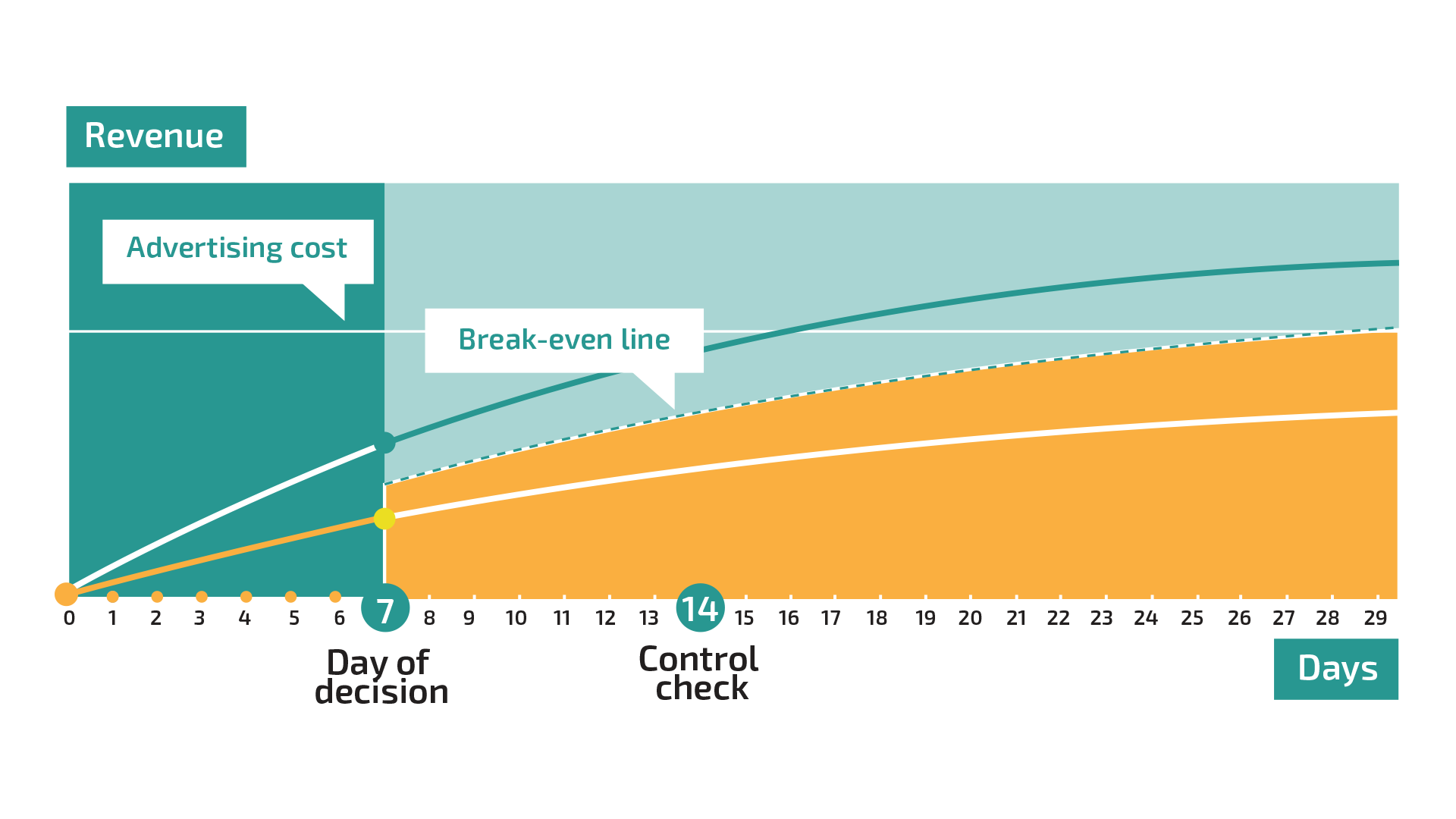 The ROI (accrued revenue / cost) from a given user cohort is on the Y axis. The days in a given cohort since registration (day 0 = registration day) are on the X axis. Finding a correlation between values is fairly easy if you have enough data – for instance, ROI-7 and ROI-120. To generate projections, one can use a formula of the y = kx + b type (or y = kx), or any other suitable forecasting method.

Over time, you’ll have accumulated data for a given cohort for a set of ARPUs. This data can cover either all users, or just those involved in advertising. One of the ways you can make a projection is by compiling an ARPU table for different cohorts. The law of large numbers is in play here — your calculation’s accuracy will increase with the number of users involved.

However, don’t forget that if you’re targeting users from a given country, the calculation should only cover users from that country. Once we lost about $50,000 on users from South America just because we overestimated payability for this new region, and that was about 25 percent of all our marketing budget that time. 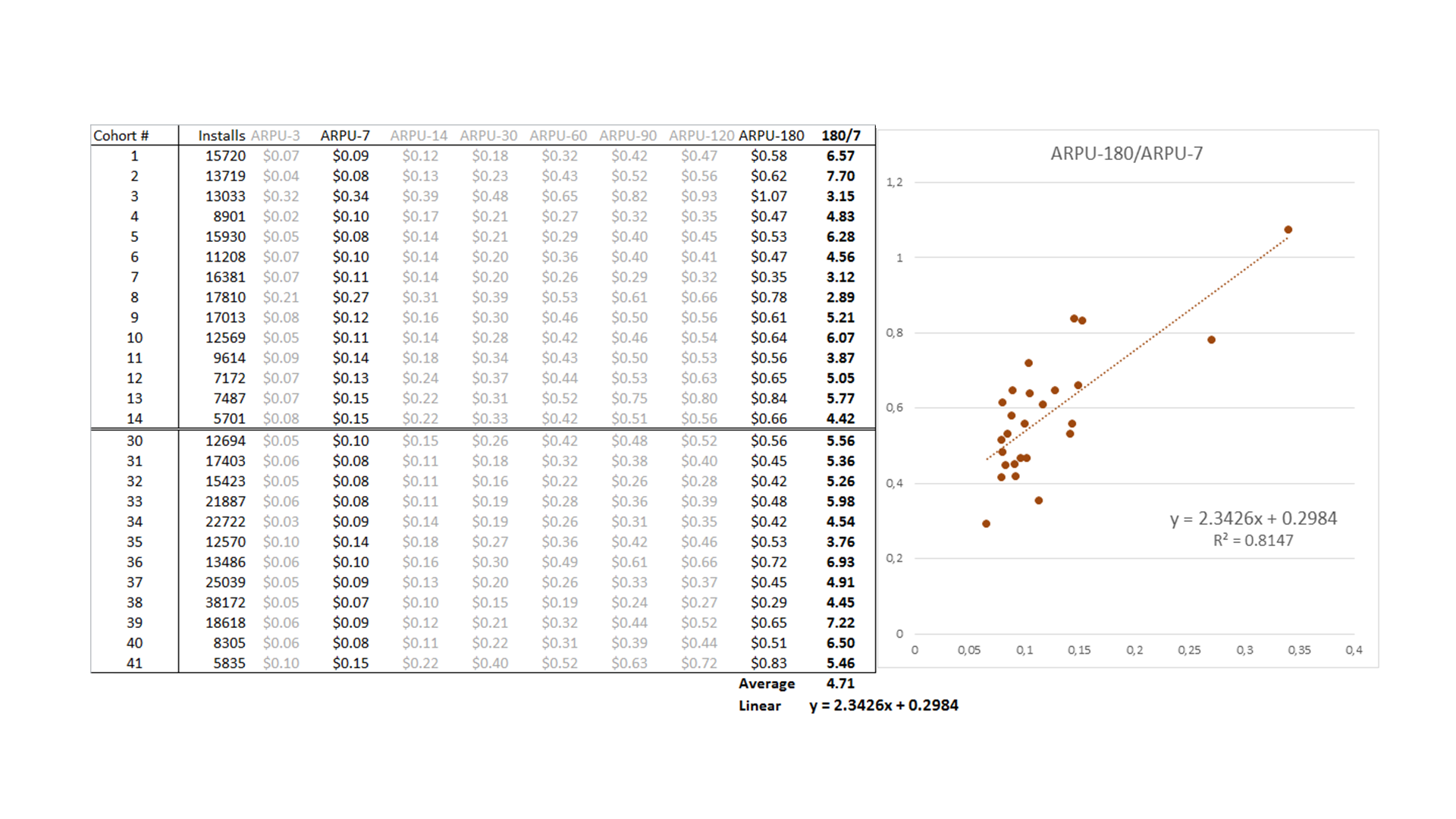 Above: The image contains an example of coefficient calculations based on real data from Robinson. The table contains ARPU values for various US user cohorts. Don’t forget to add revenue from monetization through in-game advertisement if you have one in your game.

Here are two basic examples you could use to forecast  ARPU-180 (based on real data from ARPU-7):

You can try to use more advanced approaches to increase accuracy, but those above are simple and sufficient.

How to pick the most profitable payback period

If we assume that a user brings in $5 over a project’s lifetime (one, two or more years), the payback of said user on the 90th or 180th day determines the proportion of the $5 that you’ll get to keep. In other words, more users with smaller margins are on one hand, while fewer users with higher margins are on the other. This is a typical “more, but worse, or less, but better” dilemma.

We empirically tested the effect of margin reduction on the volume of attracted users – the resulting ratio should maximize your total revenue. For example, we found our equilibrium when we cut margins 30-40% down per user and this allowed us to triple our total profits. 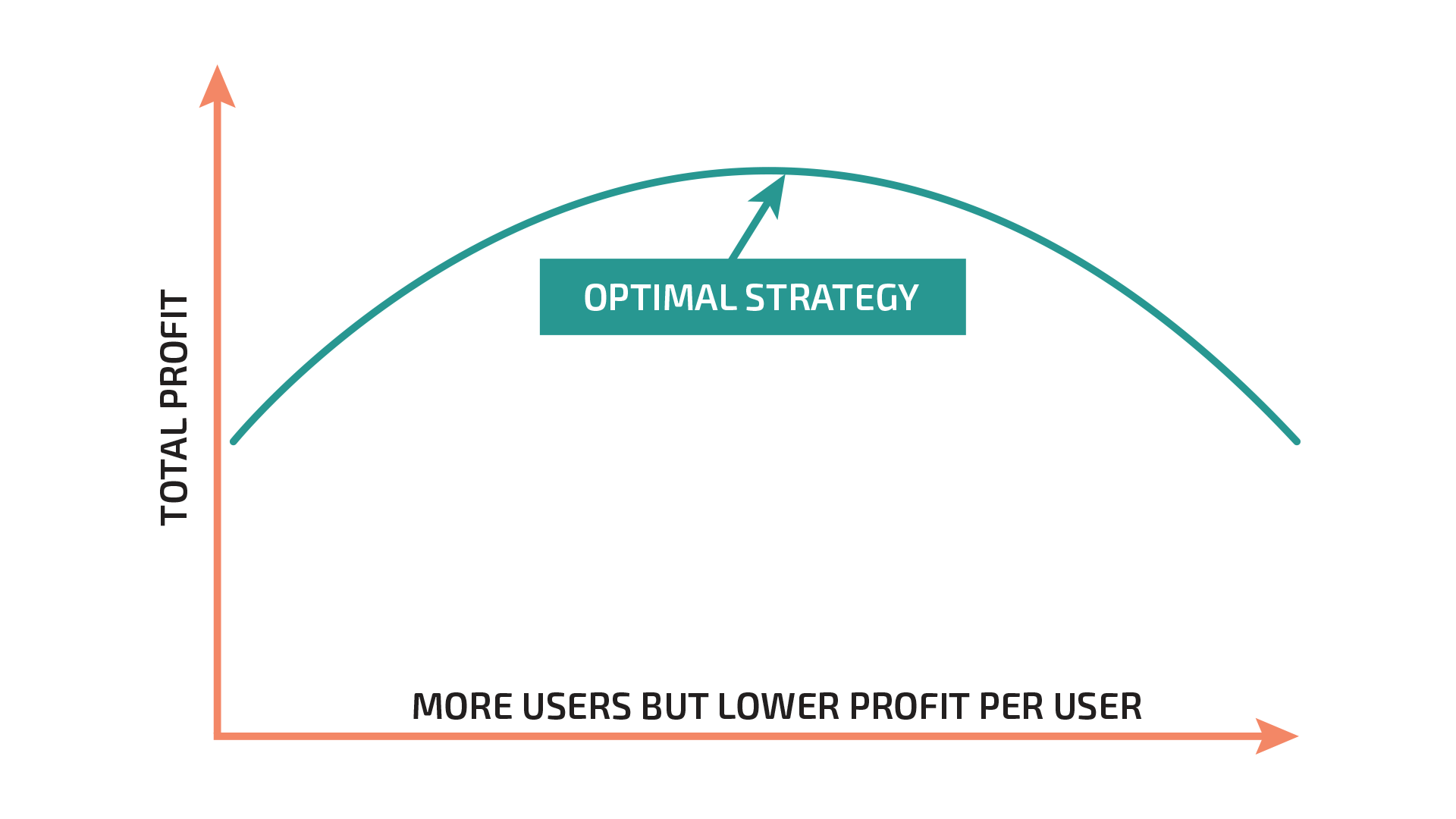 We can spend more than we have: how do we avoid making mistakes?

Your model will deviate from reality, and there are plenty of reasons as to why this might happen. The key here is monitoring your daily-weekly-monthly indicators to check if they match your plans. There will always be gaps and disparities, and you need to spot and respond to them as early as possible (before the accounting team spots them for you) — this will reduce potential losses, speed up your reaction rate, and stimulate growth.

As we constantly buy traffic, we divide our ads into 7-day cohorts for the sake of convenience. Each ad’s data is documented in a spreadsheet for analysts and marketing specialists, and is used to form actual values, as well as ROI projections for a given period (taking into account “organic” revenues).

In addition to the above, we closely monitor the project’s total revenue, dividing it into monthly cohorts, and paying special attention to the results of the last two-three months.

What’s left is projecting user revenue that will be brought in through advertising. I described this above in the section on obtaining ROI curves by cohort. With enough data, you can generate an average ROI curve for all your ad campaigns. If you know the average payback rate of an ad campaign on any given day, you can calculate the average revenue from a cohort, based on the user attraction cost to that cohort. For instance, if you invest $100,000, you’ll already know how the payback of the invested money will eventually come about. As such, it won’t be difficult to predict how such an investment will turn into revenue over a certain period of time.