iOS marketing costs fell 7 percent from the previous month in May, but May marketing costs rose 28 percent on Android as the platforms continue to diverge when it comes to user-acquisition campaign costs, according to mobile marketing firm Fiksu DSP.

The iOS data shows that mobile marketers are becoming savvier about creating efficient marketing campaigns for apps and games, Fiksu DSP said. More marketers are launching video ad campaigns that efficiently target the right users, and that is driving down the cost per purchaser (CPP), a measure of the cost of acquiring users who make purchases in games or mobile apps.

“Game developers that take advantage of the efficiency of video ads will get the best bang for their marketing buck,” said Matt McGinty, chief revenue officer of Fiksu DSP, in a statement. “With users that are already receptive to visual, immersive experiences, game apps are perfectly suited for video-based mobile ad campaigns.”

With an overall decline in competition on iOS, media costs (CPM) fell 21 percent since last month. While CPM increased year over year, the recent trend suggests marketers are creating more efficient mobile campaigns, Fiksu DSP said. At the same time, both CPP and CPM rose on Android for the first time in months. Due to the overall decreased competition on Android, as compared to iOS, marketers are taking advantage of the bargain prices to acquire new users, which is driving up costs.

“iOS has been the gold standard for mobile marketing. However, marketers are starting to place more value on Android. With more bang for their marketing buck, marketers are able to reach users on Android without paying premium prices,” said McGinty. “As this trend continues, we expect media costs to eventually rise in tandem with the competition. Summer is typically marked by slower months for competition on mobile, and marketers will likely take advantage of this opportunity to reach new users at a low cost while still creating the highly visual video content that users love.”

While marketers are seeing the value of Android, the upcoming release of iOS 11 will present an opportunity for app marketers to reach new users. The new update is rumored to save users 50 percent of their storage by minimizing the size of videos and photos. Fiksu DSP’s most recent survey indicated that more than half of consumers deleted an app because they wanted more space for future apps, so this increased space could result in consumers’ willingness to download new apps.

“New device and software launches have a significant impact in the real-time bidding market and the fluctuation of media costs. We expect the highly anticipated release of iOS 11 to result in an upsurge in spend on iOS to reach these users,” said McGinty. “This new opportunity to reach new users who otherwise may have been unreceptive to downloading new apps is sure to drive up both competition and media costs.”

He added, “Brands and agencies are always looking for self-serve options when it comes to app marketing. We’re now seeing more gaming-app marketers ask for this as well in order to have total control over [whom] they target and [whom] they exclude from campaigns.” 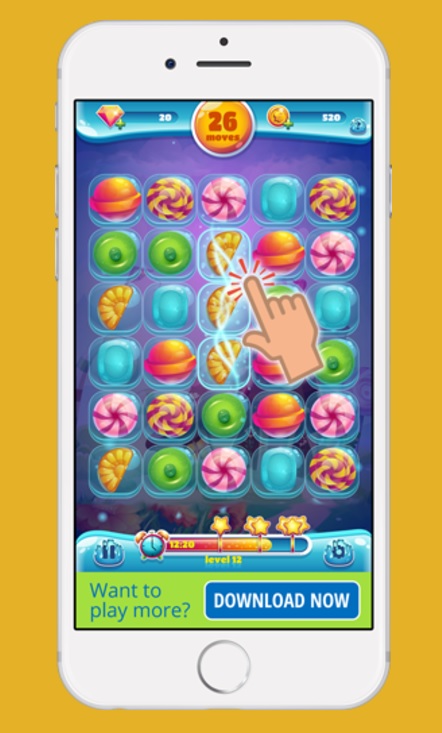 Above: Fiksu measures the results of mobile ads such as this one.