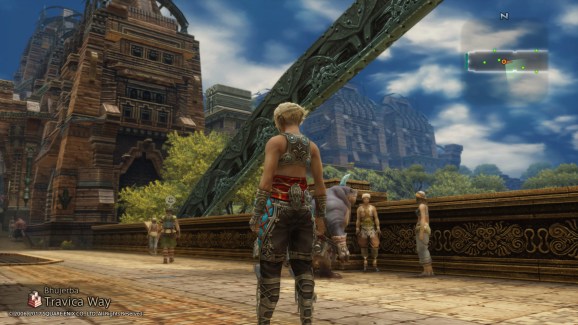 Heck, even people who have already played Final Fantasy XII might need a little help. It did first come out in 2006. It’s been over 10 years. You might have forgotten some of the basics.

So, before you dive into The Zodiac Age, check out our five starting tips. It’ll make your earlier hours in Ivalice easier and set you up for success in the long adventure to come. 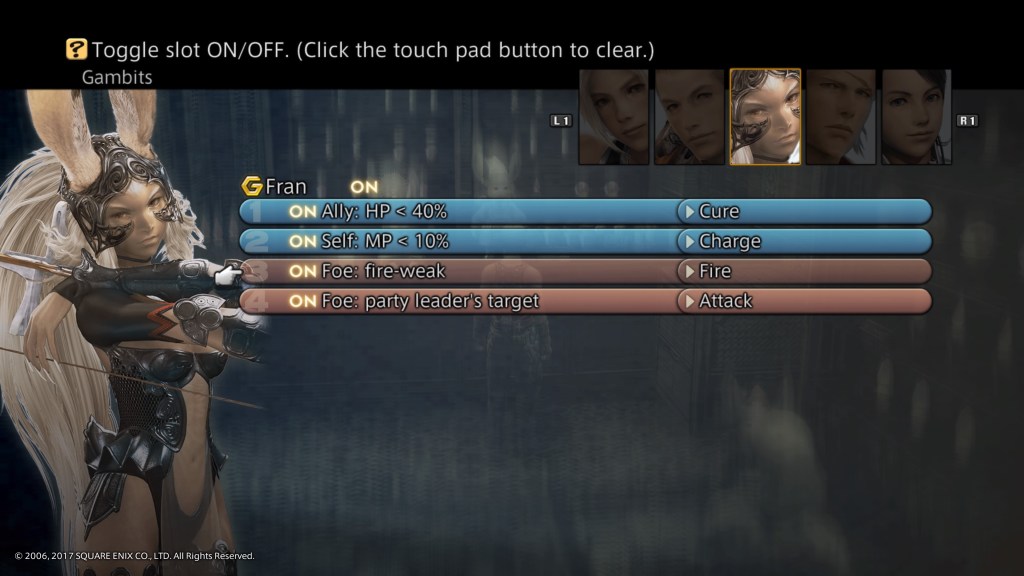 Gambits are Final Fantasy XII’s way for you to set general orders for your party. You can tell a character to heal an ally if their health is less than 40 percent full, for example. It’s a fun system that turns you into a programmer, but it can be a little intimidating for newer players. These are some helpful Gambits you’ll want to set up when you’re getting started.

First off, make sure that all of the characters who aren’t your party leader (that’s the one you control directly during the game) are set to attack whatever the leader is targeting. This will make sure that your party members are participating in fights, and having everyone focus on the same enemy will kill things faster.

Next, you’ll want to make sure you have someone on healing duty. The healer’s Gambits should prioritize restoring people’s health over attacking. So, you’ll want to make their healing Gambits are higher on the list. If the Gambit to attack the leader’s target is higher, they won’t do any healing during a battle.

Also, consider turning on a Gambit for your party healer that has them attacking the nearest target. This is more of a convenience thing, since it means you don’t have to instigate every fight. And if the leader somehow targets an enemy you don’t want to engage, you can always pause the action and correct things. 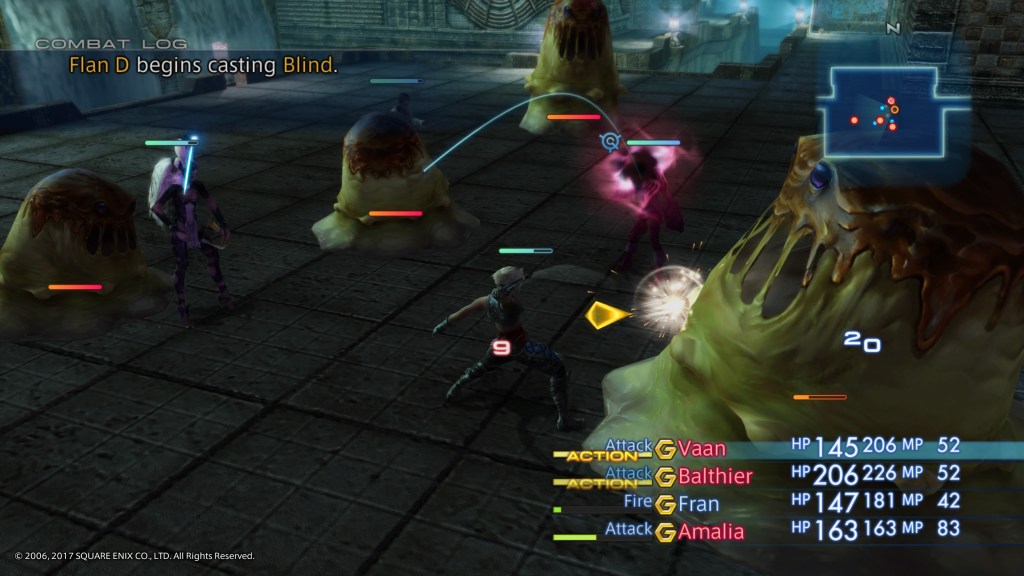 Above: Fighting in Final Fantasy XII can be difficult without a healer.

Make sure you have a healer

You only have three characters in your party most of the time, but one of them really needs to focus on healing. Enemies can quickly deal a lot of damage, so you’ll die fast if you don’t have someone throwing out those healing spells.

And, yes, you’ll want to focus on healing magic instead of items. You might run out of potions, and keeping enough of them in stock can destroy your wallet. You want to use potions in emergency situations.

Instead, you’ll want to use spells like Cure and Cura. So, when you’re picking people’s classes, make sure one of them is a White Mage or Red Mage, both of which can access those spells early on.

And make sure you don’t give your healer too many Gambits that use MP (magic points) aside from their heals. You don’t want to waste MP on attacks and then have nothing when your party starts dying.

Also, know that you can’t change a character’s class once you pick one (you can ask our poor managing editor Jason Wilson, whose son made Vaan his group’s White Mage by accident and now he’s stuck like that). 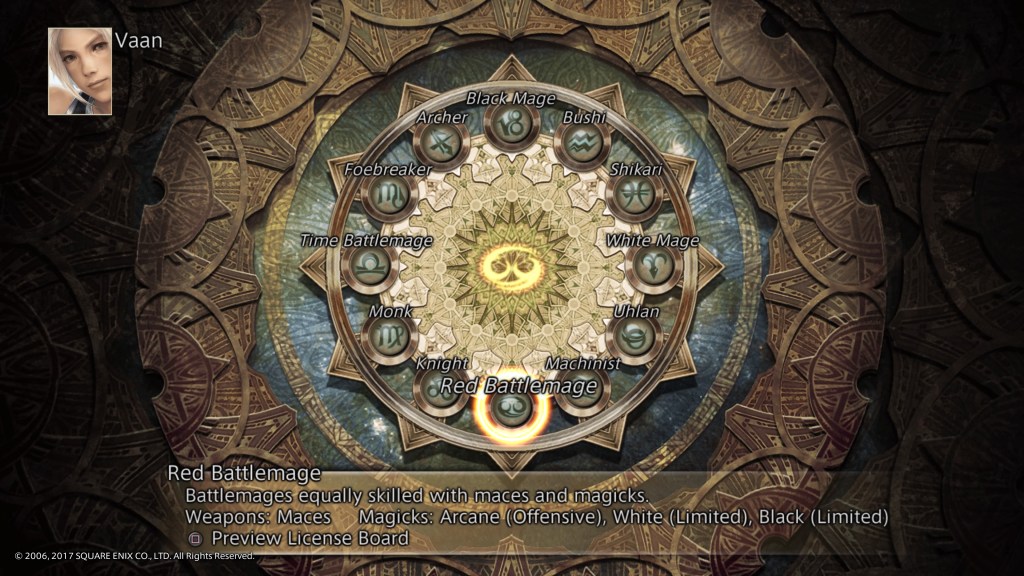 Run in circles to regain MP

Eventually, you’ll learn an ability called Charge that regenerates MP over time. This is a big help for your healer. But before you learn that ability, running out of MP between fights can be a real problem.

But your characters restores MP as you walk. And The Zodiac Age has a High Speed Mode, where holding down the L1 button puts the game in fast-forward. So, if your healer is low on mana, just turn on High Speed Mode and run around in circles. They’ll fill up in no time. 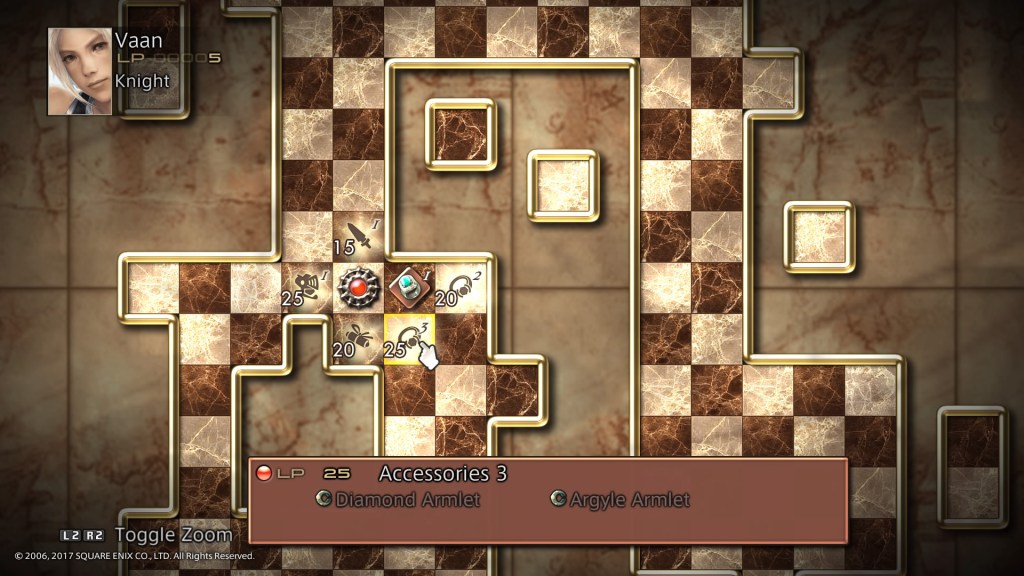 Above: The License Board.

Think before you buy a License

Final Fantasy XII has a unique progression system: License Board. It’s a checker-like grid that uses License Points — which you earn along with experience points when you kill enemies — to unlock new abilities, spells, stat boosts, and permission to equip new items. You also can unlock additional Gambit slots here, letting you set up more complex orders for your party.

You want to make sure you spend your License Points wisely. You can only unlock a square if you already own an adjacent one, so you need to plan ahead. If you want a specific spell that’s a bit further away on the grid, you need to start working your way over there.

Also make sure that don’y waste License Points on useless squares. Don’t unlock one that lets you equip specific gear unless you already have that equipment in your inventory.

Use Gambits and High Speed Mode for easy grinding

Now that you know about Gambits and High Speed Mode, make sure you put them to work. Grinding is a necessity in almost all role-playing games. Taking some time to kill a bunch of regular enemies can buff up your party, making future fights easier.

Some people (like me) enjoy grinding, but a lot of players find it tedious. But Final Fantasy XII: The Zodiac Age makes the chore easy. You can set up your Gambits so that your party can take out weaker monsters without any input from you, and High Speed Mode makes it easy to quickly run around and win a lot fights.

Do this in an area with easy enemies that’s near a save point, which restores all of you HP and MP when you use it. Then you can just turn on High Speed Mode and run around for a bit and rack up a lot of experience points and License points.