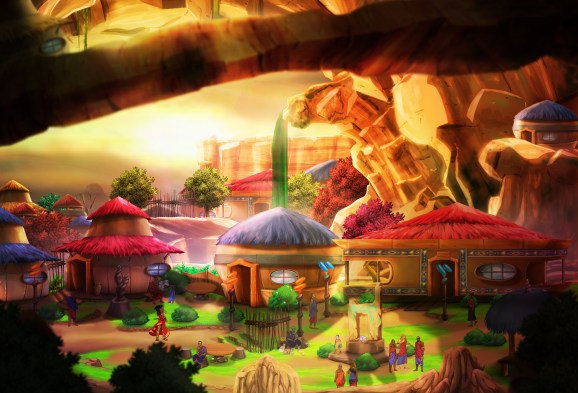 Africade is the first art exhibition dedicated solely to African video games, and it’ll run in The African Studies Gallery in Tel Aviv, Israel from July 29 to December 1.

Africa is a small market for games, but it’s growing. According to industry analyst Newzoo, the African games market is predicted to reach $442 million this year. The largest markets are Nigeria and South Africa, which will generate $174 million and $120 million respectively. Africade is shining a light on these markets, showcasing seven games from African developers, ranging from board games to virtual reality.

Ben Myres, one of the co-curators of Africade, said that the gallery approached him to put together the exhibit. Myres is based out of South Africa and cofounded the small indie studio Nyamakop. He’s working on Semblance, a platformer that’s due out in 2018 for PC.

Myres also has experience curating before; he co-curates A MAZE / Johannesburg, the South African branch of the International Games and Playful Media Festival. A MAZE is held annually in South Africa and Germany, and features developers from around the world.

“As a co-curator, the exhibition falls into a broader passion for African games and creators,” said Myres in an email. “In early 2016 I started a short-lived blog by the same name, Africade, that had a mandate to share stories about African creators and games. It fizzled out pretty quickly, unfortunately — but the reason for it was promising: there was simply too much to cover for one person. There’s so much happening in Africa that doesn’t get much coverage.”

One of the challenges, Myres says, is finding African developers to showcase — even at a festival like A MAZE / Johannesburg.

“We get an overwhelming amount of international submissions [for A MAZE], a significant portion of South African submissions, and very few African submissions,” said Myres. “That means we have to be very proactive about going out and working our networks to find African games and speakers. You have to balance two main things. There is value in exposing international games and their innovation/craft to African creators. However, it’s crucial to celebrate and push forward the diversity and uniqueness of African products.”

African developers face technical, economic, and even infrastructural challenges that make it incredibly difficult to put together a game. Myres says that it can also be difficult to get developer kits because some companies just don’t ship to African countries.

“Even though Nyamakop is based in Johannesburg, the richest city in Africa, we still face the fundamental problems of slow internet, and sometimes infrequent power,” Myres said.

And even once a game is done, developers find roadblocks that make it difficult to monetize their work. The Google Play store, for instance, doesn’t allow merchant accounts from South Africa, which means that developers can’t register paid apps or have in-app purchases. On top of that, Myres says that the isolation of being in Africa can place developers at a disadvantage.

“These days with digital market places like Steam, you can sell online from anywhere! But there’s stuff you can’t do online: you need to meet press; distributors; platform holders; and fellow developers. So you have to spend money going to events like PAX, GDC, and E3 — which is around a 16 hour flight or something — not cheap.”

Myres says though that he feels that more community is now springing up around the continent. He points to The Africa Game Show and the West African Gaming Expo, both consumer-facing festivals, as positive signs that a support network is growing. There are also more resources for developers, such as Make Games SA in South Africa and the Moroccan Game Developers organization in Morocco.

“As we’ve seen with A MAZE. / Johannesburg — just having a space for local creators to show their work is crucial in developing game development communities,” said Myres. “My hope is that the small communities spread all over Africa will soon start emerging into proper pan-African games network.”