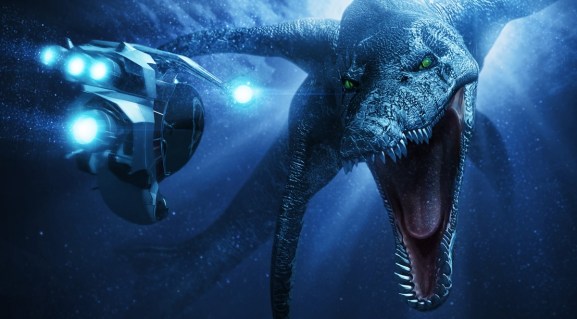 How'd you like to confront this monster from Time Machine VR up close?

Venture capital is still out there for augmented and virtual reality studios, but they’re finding it continues to be a challenge to get enough consumers to pony up for games on the Oculus Rift, HTC Vive, PlayStation VR, and mobile platformers.

In a recent interview from the Gamelab event in Spain, GamesBeat lead reporter Dean Takahashi discussed the “VR desert” with Minority Media’s Vander Caballero. His studio’s Time Machine VR, which goes underwater to check out prehistoric sea reptiles such as pliosaurs (they are not dinosaurs, despite what some think!), made money but hasn’t made it big, and this is something that a number of VR games are dealing with.

Not everyone can be a Job Simulator or Resident Evil 7, after all.

But studios do have some tactics available to them if they find their games aren’t covering their expenses, Caballero explains. You can get investment — VCs are still dipping to VR. The platform holders, like Google and Oculus, are helping, too. And I’m a big fan of what Insomniac’s doing, putting out VR games while still making traditional triple-A experiences such as Ratchet & Clank and The Amazing Spider-Man.

Maybe diversity is the key to surviving the VR desert — make good games on established platforms while you experiment with the emerging platforms.

VB LIVE: Last year AR and VR raked in $1.8B, with 6.3M headsets shipped. How does that impact your business? Find out in this VB Live event, where we’ll be unveiling the results of  our VB Insight consumer study into VR and AR, consumer attitudes, and more. Register here for free. VR and AR are marching along. […]

Velan Studios, a game studio founded by two brothers who made big games for Activision, has raised $7 million in venture capital as it launches an effort to prototype new types of games on emerging platforms. The amount of money suggests it’s still possible for seasoned teams to raise a big chunk of money from […]

Microsoft has announced a new Mixed Reality Partner Program that opens up its existing HoloLens agency certification program to include systems integrators (SIs). Way back in early 2016, Microsoft launched its HoloLens Agency Readiness Partner program to creative agencies in North America, followed a year later by Europe. In a nutshell, the program has been about training […]

Hoping to breathe some life into the virtual reality market, Oculus said it is cutting the price of the Oculus Rift VR headset and its Touch controller by $200 to $400 for a limited time. The “Summer of Rift” promotion combines the Oculus Rift headset with the Oculus Touch hand controls for $400. The Rift […]

CloudGate Studio is launching its dinosaur virtual reality shooter Island 359 on early access in the Oculus Store. Hoping to reproduce the terror of fighting dinosaurs in the Jurassic Park films, CloudGate is immersing players in a jungle world where larger-than-life dinosaurs jump at you as you try to take them down with heavy infantry weapons. […]

If you’re the type that believes VR and violence shouldn’t mix then best look away now; Gorn has no sympathy for you. This is the game you imagined when you wondered what Robo Recall would look like if you replaced its cold, disconnected robots with flesh and blood, and it’s every bit as brilliantly gruesome as you suspected it might be. (UploadVR)

Oculus and Alexandre Aja, the director of films such as The Hills Have Eyes and the Daniel Radcliffe-led dark fantasy Horns, are teaming up with Future Lighthouse for a few VR horror tales. They’ll be working together on a horror anthology that will take advantage of VR’s immersive storytelling potential to dive into your childhood fears. (via UploadVR)

Multinational auto giant Volkswagen Group is no stranger to virtual reality. The corporation has experimented with the technology on multiple occasions, using VR headsets to let consumers to peek through Audi car hoods with x-ray vision and experience what it would be like to drive them on the moon. (via VR Scout)

Magic Leap is still figuring out what ‘mixed reality’ is

Magic Leap CEO Rony Abovitz recently said at an investor conference that the company’s ‘mixed reality’ headset (?) “is not far away” from launch, whatever that really means. While the mysterious startup might be closing in on consumer-ready hardware, it’s still in the process of discovering exactly what ‘mixed reality’ is. Delivering the opening keynote at gaming conference Develop:Brighton today, Magic Leap’s Graeme Devine said, “There’s huge expectations that mixed reality will come of the gate and, oh boy! It’ll be here and it’ll be just like Minority Report right away… And no, we’ve never seen that with any platform. So that ask is impossible.” (via Engadget)