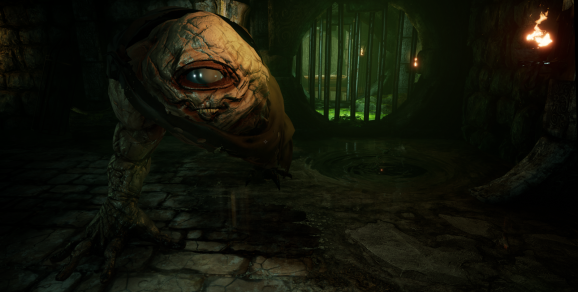 Looks like Gumi has had its eye on InXile!

The bard has a new story to sing at InXile thanks to an investment from Gumi, and the troubadour’s tale isn’t going to take the form of Torment: Tides of Numenera or Final Fantasy: Brave Exvius. What shape will this story take? How about an open-world survival role-playing game … in virtual reality.

The unannounced open-world survival RPG, InXile CEO and founder Brian Fargo said, is based on one of the studio’s existing worlds — so it could be riffing off Wasteland, Torment: Tides of Numenera, or The Bard’s Tale (though it could also be Hunted: The Demon’s Forge, a fantasy take on the cover shooter that InXile made for Bethesda Softworks in 2011). Fargo’s interested in open worlds like those found in Ark: Survival Evolved, but InXile wants to add more RPG elements.

“I’ve been fascinated by the social dynamics of open world games, and I’ve wanted to bring our storytelling techniques into this genre and push on the intensity of that experience,” Fargo said over email. “It doesn’t take much imagination to understand how powerful this genre will be in VR.”

At first glance, this may look like a weird partnership. InXile and its forerunners (Black Isle and Interplay) have decades of experience in Western role-playing games, while Gumi focuses on RPG mechanics that work in Asia. But Fargo points out that InXile’s recent VR work went a long way to securing this investment and partnership.

“Gumi’s main focus here is on VR, and it appreciated the quality of the Mage’s Tale and sought us out based on it,” Fargo said. “One of the other great aspects to our partnership is that Gumi may help us bring our franchises into the Asian marketplace, something you need a local partner for.”

InXile is a leading RPG studio. It released the stellar Torment: Tides of Numenera earlier this year, and it followed with its first VR game last month, The Mage’s Tale, for Oculus Rift with Touch. You play a mage in The Bard’s Tale universe (The Bard’s Tale IV is also in development at InXile), and it features puzzle-solving and dungeon exploration. Players fight monsters and craft magical spells as they take the role of a mage apprentice who’s trying to save their master. It’s getting an update soon, too, to fix some movement issues (one of many subjects at designers tackled during the VR portion of this year’s Game Developers Conference).

The studio will be hiring to help augment its already talented design and development crew.

“We we will be adding staff to help us with uniqueness of making a server-based game,” Fargo sai.d “We’ve already found talented programmers who have created server-based games using Unreal and we’ll have a special talent announcement in the future. We are taking this initiative very seriously and want to bring in the best.”

Gumi began its expansion into VR in 2016 with Tokyo Startups, an incubator focusing on the Japanese market. It’s invested in The Venture Reality Fund, which deals with early-stage AR and VR comapnies in the U.S. And in March, it put $1.2 million into Playsnak for VR game development.