When it was released, XCOM 2 was a fantastic tactical combat game with an ambitious and occasionally frustrating strategic layer. The complex interactions of the various global systems in the game were tough enough to deal with, at appropriately high difficulties, that various XCOM 2 missions felt so essential that they led to save scumming: reloading constantly until you managed to get a good result.

If I, personally, were a designer trying to improve these issues, I might focus on tightening up the strategic layer in order to let the best-in-class tactical component of XCOM 2 shine. That’s the idea behind the generally but not totally semi-official mod of XCOM 2, Long War 2. And I’d have been wrong. Long War 2 is great, but largely shifts the save scumming issue toward later in the game more than it specifically fixes it.

Instead, XCOM 2’s upcoming expansion pack, War of the Chosen, takes an entirely different approach. Forget consolidation or making systems more efficient: this is an expansion that’s all about adding more, more, more, with the expectation that it’ll do more good than bad.

Reading about War of the Chosen makes it sound like it’s bombarding players with new stuff. Fire Emblem-style relationships between squaddies! Darkest Dungeon-style stress! Recruitment posters celebrating successes! New bosses! New maps! Zombies! One hundred and twelve new damn mechanics! It can sound overwhelming and confusing when all described at once, but playing it gave a different impression: the new additions exist to make XCOM 2 make more sense. Here’s how:

It makes the world work

A bunch of these new additions are aesthetic and thematic–that is, they give the world of XCOM 2 more personality and more history. Even in just the few hours I played, Earth felt much more like a planet that had been a warzone for twenty years than it ever did in XCOM 2. The ruined city map, for example, is a great addition, as is the clear implication that the zombie-like Lost were created by the mysterious objects from the first XCOM’s intro.

War of the Chosen channels most of this thematic enhancement through the idea of “resistance.” Its new posters exemplify this: there’s an entire new menu dedicated to building resistance recruitment ads, offered to you after each successful mission and promotion and the like. You could, if you wanted, spend hours putting each of your squaddies in the perfect pose, with the perfect slogan. They add no mechanical benefit, but it’s a great motivational reinforcement to design one then immediately see it on your next resistance base defence mission. 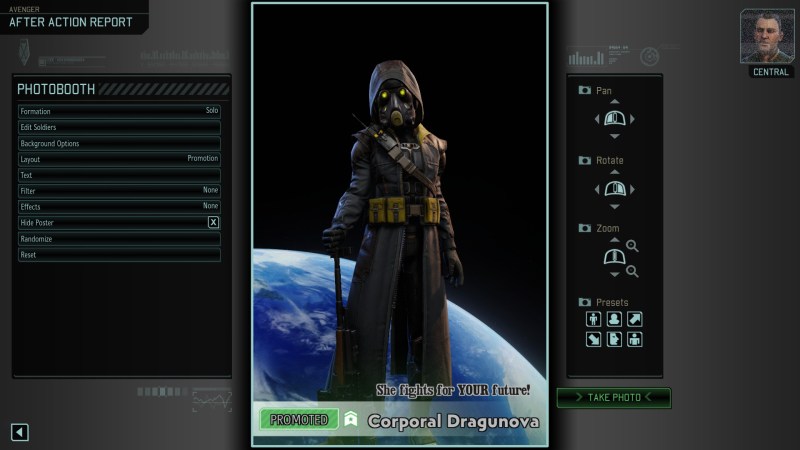 What’s bigger, though, are the three resistance factions: the Templars, Skirmishers, and Reapers. They have very different motivations, aesthetics, and leaders who chat with you on the map (there’s a lot more chatting on the map). In the plot mission that started my play session, two of the resistance types were introduced, and their history with one another and with the aliens was developed enough to pique my interest as well. The Skirmishers, former ADVENT troops who’ve developed free will and fight against their former oppressors, are an especially fascinating addition. More on them later.

The biggest new addition –the Chosen themselves — also help the thematic power of the expansion. A mission like the first ADVENT counterattack on a resistance base is no longer framed as the act of a faceless organization, but a deliberate strategic ploy by one of the powerful Chosen to win their rivalry with one another.

I had thought initially that XCOM 2 was a significant improvement on the relative genericness of XCOM: Enemy Unknown’s setting, so didn’t expect that further improvement in that regard would significantly help XCOM 2. But my few hours of War of the Chosen showed that it very much does help, to my surprise.

In addition to thematic depth, there’s, as mentioned, a bunch of new mechanics. For a game that already had strategic and tactical pressure coming from multiple directions, that doesn’t inherently sound like an improvement. Here’s the thing, though: from what I played adding these new mechanics might actually be exactly what XCOM 2 needed. The key is philosophical. The new aspects of XCOM 2: War of the Chosen add advantages to the player’s strategic toolkit for every challenge they create.

So let’s take the biggest example, the Chosen themselves. These are three unique aliens who are competing with one another to take XCOM out, which will give the winner control of Earth when the Avatar Project is completed. Mechanically, this means that missions occasionally have boss aliens getting in the player’s way–the one in the demo I fought was the Assassin, who has more direct attacks to confront squaddies. And unlike the Alien Rulers of that mini-expansion, the Chosen don’t seem to be unfairly powerful (but I did only have the intro skirmish with one). 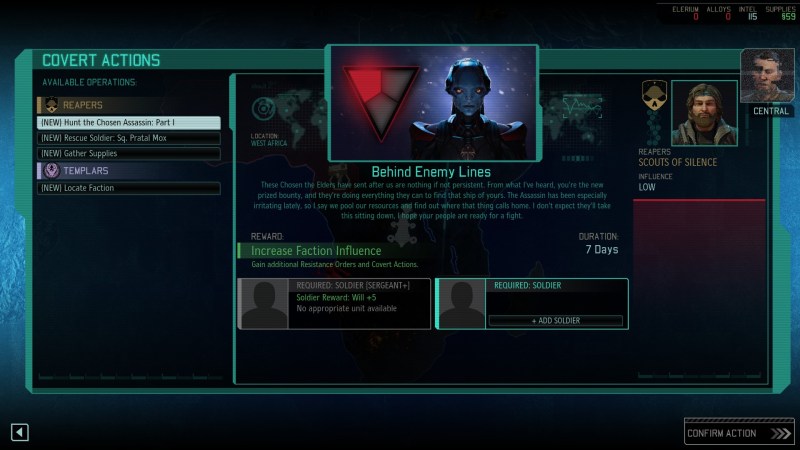 But like I said, in War of the Chosen, the new difficulties are balanced out by new strengths. The three Chosen are countered by the strengths of the three resistance factions, who each offer a unique unit to XCOM at the tactical layer. At the strategic layer, however, they also offer two different buffs. Covert ops are special mission forms, similar to the Exalt missions from XCOM: Enemy Within, where one or more squaddies (or, occasionally, engineers or scientists!) are sent off for a set amount of time to trigger a specific mission, like rescuing a captured squaddie.

Beyond that, the resistance factions also have specific buffs that the player can choose from in order to help out. These were described to me as choices that allowed players the option to bypass the things that annoyed them–like making scanning for supplies instant, or giving more turns on the infamous timed missions. Given how some of the enhancements described were the subject of very popular Steam Workshop entries, what seemed to be described was, amusingly, having helpful mods turned into an in-game resource.

Other new mechanics are straightforward improvements to XCOM’s capabilities. The new Fire Emblem-style bonding mechanic, for example, buffs the two soldiers involved. Changes to the progression system for squaddies allow for mini-achievements, like flanking enemies, to be converted into abilities beyond the simple class leveling.

Even some of the aspects of War of the Chosen that seem like challenges may end up helping the game overall. The more robust morale system combines elements of Darkest Dungeon and XCOM’s Long War mod by making characters who go out on missions increasingly need to be rotated in and out of squads to maintain health. Along with the covert ops, it may seem like XCOM 2 will be harder to stick with a single elite squad and therefore harder overall. But that depends on how the game has been rebalanced — if it’s properly built around having a deeper pool of squaddies instead of a single core squad, that could fix the biggest problem with the strategic layer of XCOM 2.

That’s a smaller variation on the bigger question I’m still left with regarding War of the Chosen. Thematically, I have no doubts that this expansion will drastically improve XCOM 2. Mechanically, most of what I saw seemed to all be on the right track, but my big question remains this: will there still be bottlenecks that force players into absolutely must-win scenarios? Will mistakes made 10 hours earlier still damn entire strategic campaigns, especially at higher levels? It’s possible — maybe even likely — that War of the Chosen will have fixed these issues. If so, it’ll turn a great, if flawed game, into a true classic. If not…I’ll probably still play it for dozens of hours.