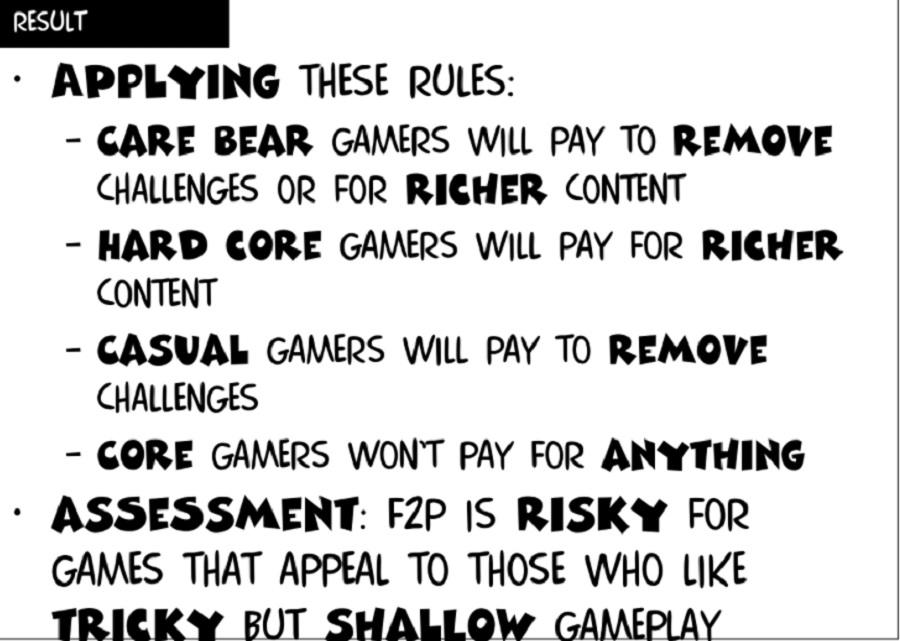 Above: Richard Bartle has a new list of free-to-play gamers and what they will pay for.

GamesBeat: The way you described that — it seems like players get real motivation from theorizing about what the developer wants them to do. “He’s forcing me to grind. I’m going to react against that.”

Bartle: Some players will think about that. Other players won’t because they like games that don’t have that depth. Of course, the more a player thinks about that, the more they’re leaning toward becoming designers rather than players. If you’re playing a game and you stop to think, “How should I do this,” that’s one thing. That’s a difficulty level. But if you’re thinking about why you’re doing something — I remember playing Lord of the Rings Online. At one point, I thought, “I’m supposed to be saving the world from Sauron, and in order to do this, I have to pick some flowers because Radagast can’t be bothered. No, you just sent me on a tutorial quest. It’s nothing to do with the story.” That pushed me out of the immersion, but of course, I’m an MMO designer, so I’m never really playing as a player anyway.

In other games, they can have things in them that will immerse players and lead them to do things that they wouldn’t do if they were giving it any thought. There’s a famous quest in World of Warcraft, the one where you take a needle and torture somebody to make them reveal someone else’s location. I don’t really want to do that, but many players did because that’s the next step in the quest, and that’s how it works. Just poke that guy with the neural needle, and he tells you where to go. It’s not a trap or anything. It really is somebody who just says, “Oh, it’s just over the rise there.” 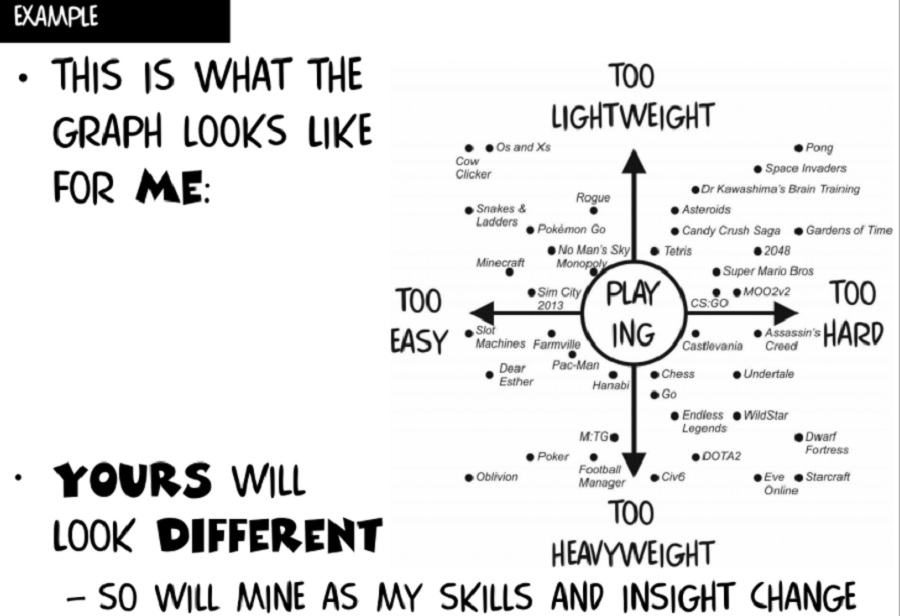 Above: Richard Bartle lists how he views games in terms of difficulty and lightness or heaviness of subject matter.

GamesBeat: I wanted to know more about what you mentioned as far as objectifying. If you’re objectifying a game, you’re not really immersed in an experience.

Bartle: Right. It’s not a subjective experience. If you’re dealing with large numbers of people, you have to objectify them. A city planner looking at traffic flow isn’t thinking, “That’s Mrs. Smith going to work.” They’re thinking, “This flow of traffic happens at this time of day.” They’re objectifying at that point, but you want that because it doesn’t help to not be objectified.

Whenever there are statistics involved, people will always look at the individual. At the moment in Europe, we have all these refugees from Syria coming over. There’s large numbers of them. You objectify them. “We have a million Syrians. What do we do with them?” But the news stories are about this one family here, this one person here, and we really need somewhere for them to live. Yes, you do, but there’s a million people like that. You objectify them all because when you’re dealing with statistics that’s how it works. You can’t make all those decisions on an individual basis.

In a game, the objectifying there is, “When I play this game, am I thinking about it as a game, or am I into the game?” Most people want to be into the game. If you’re a designer or journalist, you’re not playing it to be into the game. You’re playing it objectively, so you can give it a review. If you suddenly find yourself playing for three hours and you really should be writing the review, but you just need to build one more unit — when you reflect on it, then, you’ll try to objectify it, but when you were playing it, you fell into that subjectification.

GamesBeat: You were in your flow.

Bartle: Well, maybe you would be in flow if it were an easy difficulty thing. But it can be really hard, even too hard. You’ve still got some options as to why you’re doing this without having to think, “Why am I doing this?” 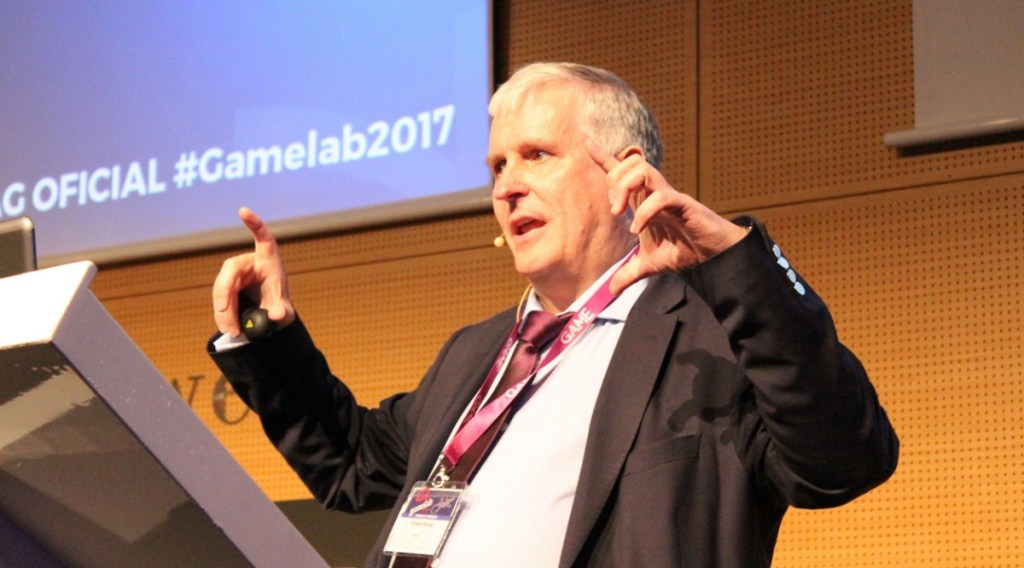 Above: Richard Bartle talked about how players react to challenges in free-to-play games at Gamelab.

GamesBeat: I guess the conclusion for game developers might be that you should think about how to keep players in this state of balance?

Bartle: But it varies per person. That’s what makes it so hard. Too easy for you might be too hard for someone else. Too shallow for you might be too deep for someone else. I’m playing Europa Universalis IV right now because I just finished Crusader Kings 2 and imported the data over. That’s a very complicated game, but it doesn’t necessarily have depth. It might just have micromanagement. Does it have depth? It does because some of the events that happen are happening for reasons that the designers have put in, and they’re interesting reasons. They’re saying something, and you read that through playing the game.

But unless you’ve played a lot of strategy games before you get to Europa Universalis IV, the first thing you’ll be thinking is, “Gee, this is so many different things I have to keep track of. Oops, I should have pressed that button to get favor with the pope two years ago.” You need to pick up that skill, but having gotten that, when you’re playing the game, you might be thinking, “What’s going on? I seem to be doing well, but I don’t know why or what it is that doing well means.” That’s the vertical axis, but as I say, that’s the harder one to play along and the one I expect to see dismissed fairly rapidly.

To accept that, you have to accept that games are an art form because designers are trying to speak to you through the game’s mechanics and through the game’s skin. Why did you make this game about a spaceship rather than a spaceship captain? Is it because a ship is more expendable, and you don’t feel bad if a ship gets destroyed? If you play as a captain, suddenly, it’s at a personal level. The crew become individuals. “That guy’s such a jerk, but he has that one stat that makes him better than everyone else.” That’s making a different statement to just controlling the spaceship while it shoots other spaceships. That’s a game about destruction. The other is a game about being a person who’s a captain of a spaceship.

GamesBeat: The level of abstraction makes a difference.

Bartle: Some people want to be a kickass spaceship, and they don’t really care about the interaction between the crew. They’d just regard that as micromanagement. Other people would be bored with the micromanagement and want to go explore planets instead of destroying Klingons.