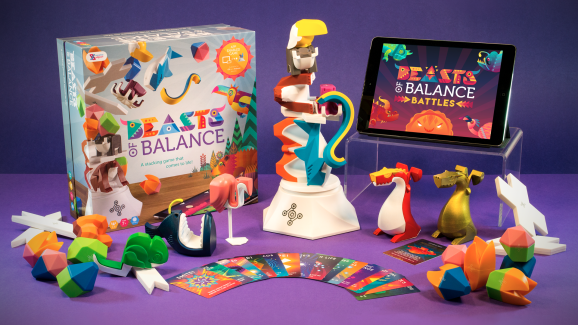 Beasts of Balance is like a 21st century Jenga 2.0. Instead of stacking wooden blocks, it features slickly designed colorful animals and abstract shapes. It’s a hybrid tabletop/digital game that’s played partly with physical objects, and partly on a smartphone or tablet. Because of its innovative gameplay, developer Sensible Object landed a spot as one of 10 companies in the Alexa Accelerator program that starts today.

Sensible Object reached its Kickstarter goal for the basic Beasts of Balance set in 2016, and it recently launched a new campaign for an expansion pack called the Battles Expansion. The Battles campaign raised $160,000 in the first three days and has unlocked two of its stretch goals already.

In its initial incarnation, Beasts of Balance is purely a cooperative game. Players take turns stacking animals on top of a white pedestal, called the Plinth. The Plinth is linked to an app, and each time an animal is added to it, that same animal also appears in one of three biomes (air, water, or land) in the digital world.

Supporting pieces affect the world in different ways, giving animals more points or moving them to other biomes and transforming them into different creatures. Some pieces also give players a chance to earn extra points, but will add challenges where they have to interact with the app while also placing a piece on the Plinth. The goal is to balance both the physical animals as well as the distribution and points of the digital animals. If the tower ever collapses, then it’s game over for everyone.

The new expansion pack is, as the name Battles suggests, not about cooperation. Instead of populating the world as a team, each player reigns over one of the biomes. The goal is to bring animals into your biome while also dealing damage to your opponents’ creatures, or even stealing them away. In addition to the core set, 17 cards will be added to the basic expansion pack. You can play them whenever you want, and they do a variety of things, such as damaging opponents or blocking attacks.

“One thing we wanted to do was introduce a bit more complexity and mid-core mechanics into battle more, so that if you want to have that lovely social play experience, like at a party or with some younger kids, that’s great, but if you want to get into something that has a bit more depth, this is a good version to play,” said Sensible Object CEO Alex Fleetwood in an interview with GamesBeat.

Fleetwood says that Sensible Object’s strategy is to take tech that people already own and create content that’s accessible. It’s planning on launching the game in partnership with a smart TV provider, for instance, and it’s also tossing around ideas about how it can use ARKit, Apple’s new augmented reality developer’s kit.

“We’re interested in how we can use things like ARKit to create augmented reality streaming modes for the game,” said Fleetwood. “One thing we hear back from streamers is about the challenge they have in getting the digital visuals and the camera visuals looking great a single stream.”

More than experimenting with new technology, though, Sensible Object puts social play at the center of its design philosophy. And later this year, they’ll be applying that to totally new IP as part of the Alexa Accelerator. In a project that’s unrelated to Beasts of Balance, the studio will be designing a new tabletop game that includes voice technology.

“Sometimes technology can dominate and get in the way of some of the ways we want to live our lives, I think,” said Fleetwood. “The Alexa is a brilliant device for that. It’s unobtrusive. It’s voice-activated. It’s helpful. That works great as part of a social play experience, where we’re having fun together, playing together, enjoying each other’s company, and this just adds an extra twist.”

Fleetwood says that they designed Beasts of Balance to be played by a wide range of ages in a variety of ways. He sees that as an interesting challenge that also translates to designing for the Alexa so that the experience is inclusive and accessible for anyone in the household who may want to try it.

“We’ve taken a view that we want to make games that can be played by everyone in the house, that can be enjoyed in different ways, and as designers we think it’s possible to rise to that challenge,” said Fleetwood. He added, “As a parent, we’re all trying to carve out more time to spend with our kids, to have time together to enjoy. I think games can be a really productive part of that. That’s something about how we operate as a company that I think is quite fundamental.”

Techstars, a startup accelerator, runs the program and Amazon’s Alexa Fund, which has pledged $100 million in venture capital funding to develop voice technology, pays for it. With funding from the Alexa Accelerator, Sensible Object just closed a $1.4 million round. Notably, London Venture Partners, one of the only VC firms in the gaming space, also joined.

“[Sensible Object’s] vision to merge physical and digital gaming by harnessing devices already adopted into the connected home is powerful and exciting,” said Aviel Ginzburg, the Alexa Accelerator CEO, in a statement. “Their execution to date with their first game Beasts of Balance has proven that not only are they the right people to tackle this opportunity, but that they’ve discovered an entirely new and highly engaging genre of social gaming where friends and family play face to face, rather than face to screen.