Yonder: The Cloud Catcher Chronicles combines adorable farming with open-world exploration. It’s the first game from developer Prideful Sloth, but its team members have game industry vets with experience at heavy hitters like Rocksteady Studios (the Batman: Arkham series). It’s coming out on June 18 for PC and PlayStation 4.

It takes place on the magical island of Gemea, which a mysterious dark shroud called the Murk is plaguing. The Murk drove a lot of people away years ago, but some folks stuck around and avoided the areas that are still polluted. The only thing that can dispel it is the power of little magical creatures called sprites. Conveniently enough, your character is a Sprite-Seer, so your mission is to find sprites, restore the island, and figure out where the Murk comes from and stop it. While on your adventure, you get to farm, fish, craft, and explore the island.

A beautiful world to explore

Yonder has eight different biomes, and each one is visually striking. Whenever I found a new town, it was genuinely cool because each one had its own personality. Every town specializes in a certain kind of trade, and it’s usually reflected in its design. The tinker’s guild town looks more mechanical with whirling lights and gizmos, whereas the constructor’s guild town has molten wax and fire everywhere.

Day-night cycles and weather also made the world feel fairly immersive. There are a lot of little nooks and crannies to explore, some of which hide secrets or treasure. One of my favorite caves has crayon drawings on the walls. I never learned who made the drawings or why, but the mystery was part of the fun.

The art style is adorable. There are cute animals to tame and capture for your farm — because what better way to show you love them than to keep them forever and ever by your side? — as well as a lot of big, bold colors that are a little cartoony but stylish. As I wandered around Gemea, I occasionally found little geocaches with presents left by other players. This was especially fun when they were left on hard-to-reach cliffs and ledges. The world actually feels fairly lonely. I sometimes saw a lone character wandering around the fields and telling me random facts about the animals, but generally speaking, I was by myself in my travels. Stumbling across evidence of other humans also playing the game was a pleasant surprise, like getting a gift from a neighbor. It’ll be interesting to see if Prideful Sloth expands on the social aspect. 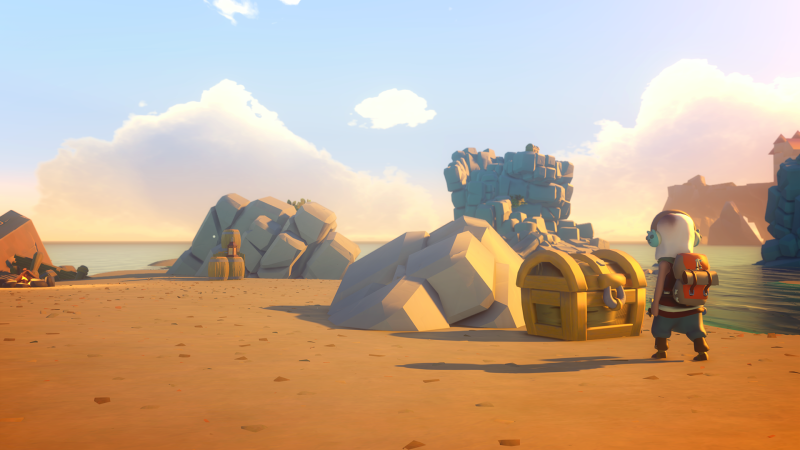 There are a lot of fetch quests where you have to gather or craft certain items. There actually isn’t a huge emphasis on livestock-rearing or farming — you can even hire farmhands to take care of upkeep for you — so it’s pretty much finding items to progress the story or to build things. Often, you also need to trade for specific items at different towns that are across the map from each other.

The world is really nice to look at, so that does somewhat ease the pain of all the back-and-forth. It also helps that you walk really quickly.

No real rewards for quests.

However, I didn’t feel rewarded for completing most of the quests. When I cleared all the Murk in one area, a little message box just popped up on the righthand side of the screen saying, “You cleared all the Murk!” It would have felt like more of an accomplishment if I got a unique item or maybe more story. Instead of a milestone, though, it just felt like I had checked something off my to-do list.

Because it didn’t seem like the quests had much consequence, I often ended up only completing the ones that felt like they were important for the story. For those with more of a completionist streak, this might not be too much of a problem. No free range on personalizing your farm.

One of the fun things about farming simulators like Harvest Moon or Stardew Valley is personalization. You can choose what crops to plant, what animals to raise, what strategy you want for whatever goal you’ve decided is most important. I’ve seen people turn their farms into gigantic pumpkin patches in Stardew Valley, purely to maximize financial gain.

There isn’t a whole lot of that in Yonder, because your plot of land is fairly small and you can’t expand it. Instead, you can start a new farm in each of the biomes, which is more about convenience. It offers a shorter trek when you tame an animal and lead it back to its pen, and it also lets you access your long-term storage.

The problem is that farming isn’t hugely important so it feels a little tacked on. You can’t even buy seeds at most of the town, and you can progress without farming at all since you can basically buy most of what you need for the story-driven quests. Your farm gets a score, but that score doesn’t really feel like it really matters — nor is it particularly challenging to get it to 100 percent. Yonder is an adorable, enjoyable experience in a world studded with mystical artifacts, but don’t expect anything too different. It’s also more of an open-world adventure with some farming involved, so you won’t be doing too much with your farm. For those who are looking for a light, relaxing experience with no combat but a lot of cute animals, this might be something you’re interested in.

Yonder: The Cloud Catcher Chronicles comes out on July 17 for PC and PlayStation 4. The publisher sent us a code for this review.