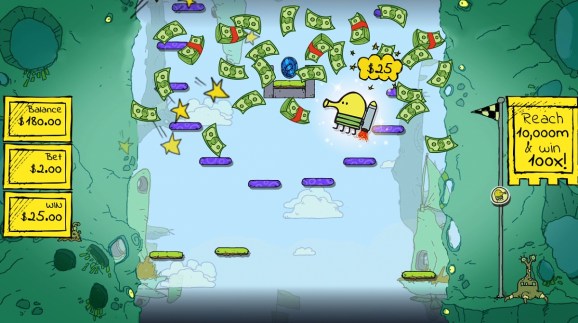 Doodle Jump is headed to the casinos.

Doodle Jump has been downloaded more than 250 million times as a mobile game. But now it is headed into casinos as a “gamblified” game, where you can now win (or lose) money on it in real-money gambling competitions.

Gamblit Gaming has teamed up with game publisher Lima Sky to take Doodle Jump into the casinos through Gamblit’s TriStation platforms in early 2018. It is part of Gamblit’s ambition to modernize casinos for younger gamblers in an age of more engaging games.

Glendale, Calif.-based Gamblit has a variety of arcade-like games that are live in several casinos in Las Vegas. Doodle Jump originally debuted in 2009, and it bounced to multiple platforms, including iOS, Android, Arcades, Windows, Xbox 360 and Nintendo DS. Now players will be able to bet real money in the classic title.

“There are a lot of Doodle Jump fans here at Gamblit, and I for one have been playing it since it first landed on my phone eight years ago,” said Darion Lowenstein, chief marketing officer at Gamblit Gaming, in a statement. “Doodle Jump’s massive fan base will love to play and win money on this classic hit in a casino, and we are very proud to partner with Lima Sky.”

Gamblit focuses on making gambling more interesting by enabling real-money wagering in games of skill. Those games can either be played in legalized casinos like those in Las Vegas, or in markets where it’s legal to make money playing games that are based on player skills.

“We’re beyond excited to join forces with the team at Gamblit to gamblify Doodle Jump and bring one of the most iconic and beloved mobile games to the casino floor,” said Matt Turetzky, chief operating officer at Lima Sky, in a statement. “Real-money wagering will add another level of excitement and engagement while still keeping true to the core elements of the game that have made Doodle Jump such a long-standing hit among fans.”

Gamblit’s Model G interactive game tables are live in Las Vegas and are the first multiplayer skill games on the casino floor, and its TriStation single-player platform is launching this summer. Gamblit is also converting games such as Jetpack Joyride, Road Redemption and PikPok’s Into the Dead. into gambling games.

Gamblit has more than 100 employees. On the Model G, Gamblit’s live games include Gamblit Poker and Cannonbeard’s Treasure. Titles coming soon on the TriStation include original titles Smoothie Blast, Match3volution, Lucky Words, and Slice of Cake. Licensed games include Into the Dead and Catapult King.