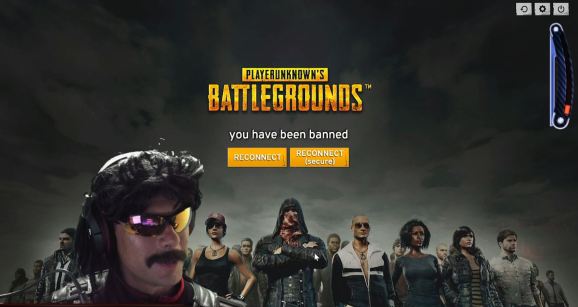 When you pay the price for your actions.

Two of the biggest broadcasters on Twitch came together last night for a megastream. Tens of thousands of people were watching PlayerUnknown’s Battlegrounds livestreamers Grimmz and DrDisRespect take on the last-player-standing shooter until a ban ended their night early. Today, that ban turned into a tiny beef when DrDisRespect jokingly threatened to kick PUBG creative director Brendan “PlayerUnknown” Greene in the chest.

Deep into their cooperative stream last night, DrDisRespect and Grimmz invited fellow streamer Anthony Kongphan to join them for some four-player squad games. They let the game match them with a random, fourth stranger to fill out the rest of their team, which became a problem when the squad only had a three-person vehicle to get away. The stranger hopped on the motorcycle and then he jumped off after realizing one person would have to get left behind.

“Well, we have an issue here,” Grimmz said.

But DrDisRespect, who considers himself a man of action, decided to fix that problem … by killing their random teammate.

In the clip of that team kill, you can see Grimmz is shocked. If you watch on Twitch, you can also see the chat explode in amusement. But one person who wasn’t quite as amused was PlayerUnknown, who was watching the stream. After that match, the squad decided to get back into another game … and that’s when DrDisRespect learned that he was done for the evening.

DrDisRespect violated developer Bluehole’s “rules of conduct,” which it posted on the game’s website. “Do not team kill: there is no excuse for non-accidental team kills. If your teammate is breaking these rules, report them to us instead.”

PlayerUnknown took to Twitter following the incident to seemingly comment on it and confirm that Bluehole was making an example of DrDisRespect.

If you break the rules in @PUBATTLEGROUNDS… no matter who you are… you're gonna have a bad time!

DrDisRespect has a huge audience, and PlayerUnknown is likely assuming that his behavior could influence his viewers. By showing that even the most famous PUBG player isn’t above the rules, it could prevent some people from deciding to team kill.

Of course, if you’re familiar with his character, you can imagine that DrDisRespect didn’t take the punishment lying down. He got on Twitter to directly beef with the Battlegrounds director.

I'll break the rules anytime, anywhere I go…. and look good doing it.

If I could do the splits I'd roundhouse kick you in the neck.

But since I can't, I'll just front kick you in the chest instead.

But that last tweet, where DrDisRespect jokes about kicking PlayerUnknown, was a step too far for Greene. The creative director reprimanded DrDisRespect for resorting to threats and violent language.

“Suggesting violence is the best way to solve a disagreement is just wrong,” said PlayerUnknown. “Even if you are playing a character … I understand it was a joke. Others, however, may not.”

Some fans grumbled at PlayerUnknown for taking things too seriously. DrDisRespect, after all, is a Florida hillbilly who is always bragging about likely nonexistent martial arts skills. Others called PlayerUnknown a hypocrite because he made a game where your goal is to murder other players. That led PlayerUnknown to write a short blog post where he fully explained his position and why he is so opposed to even joking about hurting other people in the real world:

“So today I created a little bit of a shitstorm on Twitter.

Before I begin, I have to say that I do enjoy the character Guy has created with DrDisrespect. Hell, I am even part of the Slick Daddy Club [Twitch subscription service]! I understand that he likes to talk shit, and I was right there with him until that one tweet.

I was told that I should have taken The Docs threat of violence as a joke. So now I will try explaining why I took this tweet seriously and tweeted out the response I did.

When I was in college, many years ago, I had a disagreement with my flat mate. Instead of talking it out like men, he decided to get aggressive, and while I was backing away from him, he kicked me in the chest and put my head through a plate glass door. Thankfully, I don’t suffer from any ill effects due to this experience.

The point of that story is to attempt to explain why I think even the threat of violence is not something that should be joked about. Given my experience in college, and the fact that The Doc’s threat, even as a joke, synced up closely to a bad experience I endured, it could have brought up bad memories, triggered a panic attack, or had other consequences The Doc might not have intended when composing the tweet.

All I ask from anyone that reads this is to consider that your words, however flippant they may be, could have unintended effects on those reading them.”

DrDisRespect ended the exchange at that point, and he’ll likely be back to streaming as soon as his ban ends. In the meantime, one of the fastest rising stars in game development used his platform to teach lessons about behavior in his game and in online social communities.