Esports games like Dota 2 and League of Legends have massive global audiences, but most of those viewers consume content online. That has led to somewhat pitiful numbers for esports on television. For example, the Street Fighter V finals at Evo 2017 last weekend only had 180,000 viewers, according to tracking firm Nielsen. And that event only had 122,000 viewers in the key demographic of adults age 18 through 49. Compare that to the show Bar Rescue on Spike TV, which had 757,000 viewers in the same timeslot.

Intelligence firm The Next Level put out an infographic today that provides some numbers for many of the esports competitions that aired on network or cable television. You can see in the chart below that few games broke out, and the ones that did were on network television. 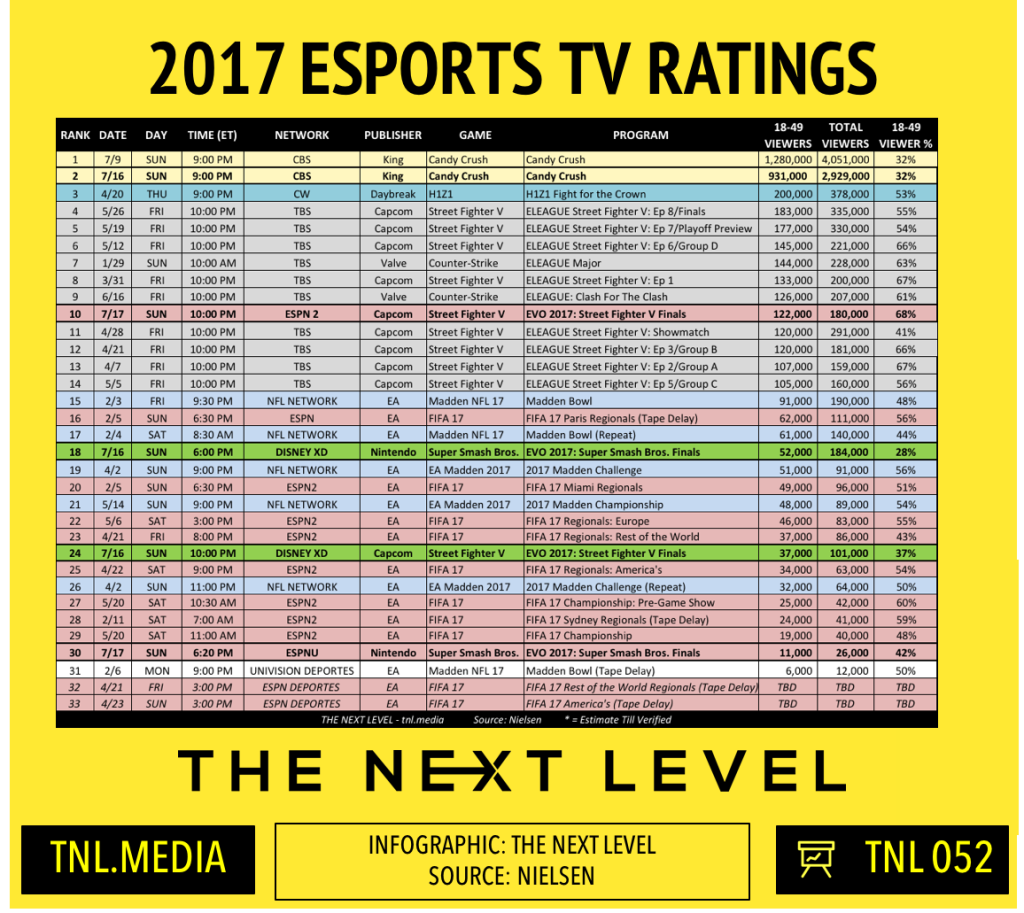 The chart above definitely suggests what everyone seems to already know: young people aren’t watching TV through cable. Candy Crush Saga was clearly the big winner here with 4.05 million viewers, but it has something of an advantage showing up on CBS. Networks still get way bigger ratings than cable. The show also looks and feels more like game show that could have wider appeal.

Candy Crush, which is the name of the show, also did well because it brought a game to an audience that might want that content. Older people are watching network television, and that resulted in only 32 percent of Candy Crush viewers coming from the key demo. That’s still 1 million viewers who are age 18 through 45, which is about five-times larger than the next closest gaming-related broadcast.

Outside of an April 20 event on CW for Daybreak’s H1Z1: King of the Kill, which had 378,000 viewers, the rest of the top of the lists is mostly Street Fighter V with Counter-Strike peppered in occasionally. This shouldn’t suggest no one wants to watch Counter-Strike, that’s insane. Millions of people watch esports matches featuring the Valve shooter online every week. They just don’t seem interested in doing that through a TV.