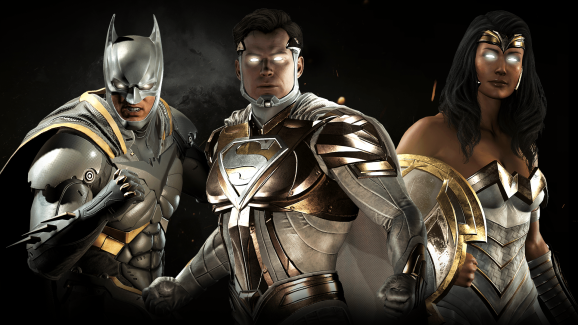 Injustice 2 is colorblind, unless it comes to green.

June was a strong month for the gaming industry in the United States. PlayStation 4 and Nintendo Switch are selling well, and a bunch of fighting games and console exclusives helped amp up software revenues.

Consumers spend $765 million in the United States last month on gaming-related hardware, software, and accessories, according to industry-tracking firm The NPD Group. That is up 7 percent from $712 million during the same period in 2016.

The big drivers of sales this month were Bandai Namco’s fighter Tekken 7 as well as a very impressive second month for WB Interactive’s DC Comics brawler Injustice 2. Crash Bandicoot and Arms also did well as exclusive for PS4 and Switch, respectively.

Hardware also saw growth for the second month in a row. NPD credits the Switch for that — although Sony had a strong showing with the introduction of its new gold 1TB slim PS4.

“Total video game spending in June 2017, which includes hardware, software and accessories, increased 7 percent versus year ago to $765 million,” NPD analyst Mat Piscatella said. “Accessories was the only category to see a decline in spending.”

Before we get onto the sales chart, it’s important to remember that the NPD report is only a snapshot of a wider market. While NPD does include digital sales, it is missing data for certain publishers and platforms. The data firm does not extrapolate or estimate, so certain marked games will only include their physical sales in the same charts as releases that include both digital and boxed copies.

Tekken 7 and Injustice 2 show that the fighting game genre is doing just fine. Injustice was the top-selling release in May, and it still has a lot of momentum. These games both rolled out just in time for the Evo 2017 fighting game tournament, which just wrapped up last weekend. And the excitement for that competition likely helped sales of both. At the same time, both games are clearly appealing to a broader audience.

“Tekken 7 from Bandai Namco was the best-selling title of the month,” said Piscatella. “June marks the second consecutive month that a newly-released fighting game has topped the sales chart.”

The other new games on the chart are both exclusives. Crash Bandicoot: N. Sane Trilogy landed at No. 4 even though it only came out on PS4 and only had two days before the end of NPD’s tracking period. This marks a return to form for Crash, who has had something of a sales slump since the late 1990s.

The other exclusive was Arms for the Switch. What’s especially impressive here is that it sold that well without including any digital sales. Nintendo separately confirmed that its wacky fighter surpassed 256,000 copies sold physically and digitally in June. Mario Kart 8: Deluxe and Zelda: Breath of the Wild sold 180,000 and 145,000 during that same period, respectively.

This shows that Nintendo fans are still buying a ton of software for their newly acquired Switch devices.

“Arms for the Nintendo Switch debuts at No. 5 in the best-seller charts for the month, giving the publisher, Nintendo, three of the month’s top 10 best sellers,” said Piscatella.

It’s worth noting that Prey, which debuted in May, has completely fallen off the sales charts. That’s not just the overall sales chart, it didn’t even crack the top 10 on Xbox One- or PS4-only lists, which you can see below.

The best-selling games of 2017 so far

Strong sales from all systems boosted system sales. PlayStation 4 led this category thanks to Sony rolling out a discounted golden PS4 during E3 week.

“The PlayStation 4 was June’s best-selling hardware platform, driven by the Slim PlayStation 4 system in Gold with 1TB HDD,” said Piscatella. “It was the best performing June for PlayStation 4 unit sales to date.”

But the Switch is still the big story in hardware. The system is selling well, but it’s not necessarily stealing market from Microsoft or Sony. Instead, it is expanding the market.

Finally, accessories continue to stall as the bottom falls out of the interactive toy market.

“Total spend on accessories and gamecards fell 1 percent compared to a year ago, to $159 million,” said Piscatella. “Meanwhile, gamepad sales grew 22 percent in June compared to a year ago, and the PS4 DualShock 4 Wireless Controller Black was the month’s top-selling gamepad. But the Interactive Gaming Toys segment continues to decline, with June 2017 spending falling 40 percent versus a year ago.”