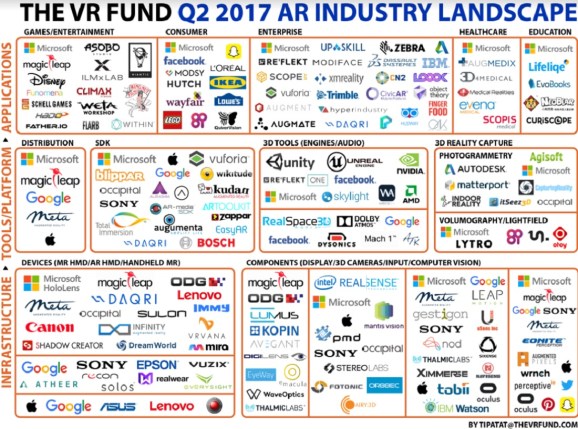 The Venture Reality Fund released its augmented reality landscape for the second quarter, and the research shows that 150 companies are focused on a wide range of AR technologies.

The Venture Reality Fund, which has raised $50 million to invest in AR and virtual reality startups, said it saw a 60 percent increase in the number of companies that are focused on AR in the enterprise, compared to the first quarter.

“Over the past quarter, the AR industry witnessed several notable moves by major players, including Facebook and Apple, which immediately led to a robust increase in developer activity, as well as extensive coverage in the market,” said Tipatat Chennavasin, cofounder and general partner at The Venture Reality Fund, in a statement. “These strides are reflective of rising interest in AR, driven primarily by device infrastructure and software development tools.”

The VR Fund evaluated more than 2,000 companies for the landscape, and those selected meet a certain criteria of funding, revenue, mainstream coverage and/or major partnerships.

The activity in Q2 was strongest in the areas of device infrastructure and SDK tool development, indicating that AR is still evolving as an industry. These efforts will continue to help advance the growth of apps for consumer and enterprise use in upcoming quarters, Chennavasin said.

Microsoft HoloLens and Google Tango helped lay the groundwork and educate the market about the capabilities of AR, despite limited distribution of their developer kits. Further advancement of these platforms is expected in the near future, in response to Apple’s ARKit.

Google’s advanced Tango technology has been proven to deliver an experience capable of augmenting the entire space around a user. However, the existing fragmentation within the Android ecosystem handicaps rapid development and wider adoption of Tango.

The introduction of Facebook’s camera platform and Apple’s ARKit inspired an immediate uptick in activity and increased attention for the AR space, particularly related to consumer applications. Early developer response indicates that Apple is becoming a major force in the AR platform war.