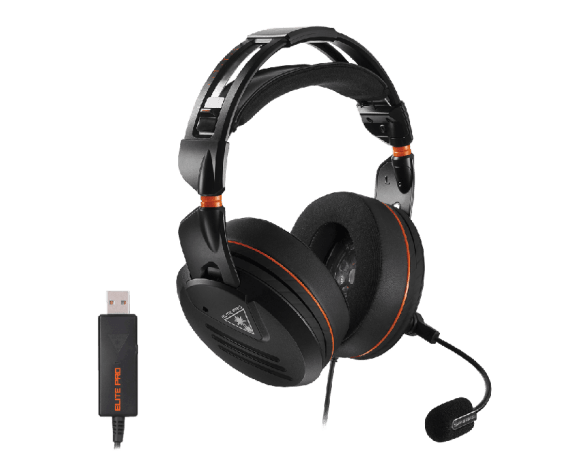 The gaming-headset market has endless options from dozens of vendors, and that’s because each person has a slightly different use case in mind when they are shopping for one of these devices. If you play primarily on PC and split your team between single-player experiences and online multiplayer, then I think headset manufacturer Turtle Beach has built its latest product specifically for you.

The Turtle Beach Elite Pro PC Edition is the same as the Elite Pro that I reviewed last year, but it comes with its own dedicated USB amp that does DTS Headphone:X 7.1 Surround Sound. That puts it alongside a recent class of devices to feature these plug-and-play dongles like the HyperX Cloud Revolver S and the Sennheiser PC 373D. It is available now for $200, and I’m enjoying it.

I want to get this out of the way up front.

The Elite Pro is more comfortable than the one I used last year. Turtle Beach says it didn’t make any tweaks to the design, but I’m wondering if manufacturing processes or something has improved. This headset features comfy ear cups that hold tightly onto your head, which I prefer. But the last one felt like it was holding on too firmly even when you adjusted its “ComforTec” sliders to loosen its grip. That’s not the case this time around. On its tightest setting, I think the Elite Pro PC Edition is great.

I hate that I have to contradict myself, but I’m not going to pretend that I still find it uncomfortable just because those were my feelings last year. Who knows — maybe my head has changed or something?

I still find that the headset will slide forward on the top of my head occasionally, but a quick shift is enough to get it back in place. Most importantly, I’m able to wear the headset for hours at a time without ever feeling it.

The included USB amp is one of the big stars for the Elite Pro PC Edition, and it does a fine job of pumping out full, thumping bass tones and chirping, blaring gunfire. I think that Turtle Beach has also tuned the headset to better handle sudden, loud noises that overwhelm the highs and mids. In the 2016 Elite Pro headset, I noticed artifacting with those kinds of sounds. Instead, now I feel like this headset outclasses most other headsets in this price range when it comes to handling audio outbursts.

The surround sound is also excellent. Where HyperX and Sennheiser have dongles that do Dolby 7.1, I find that I get noticeably better results from DTS. The sounds have more directionality to them without sounds like the amp is processing them through a funnel. This still doesn’t compare to a real 7.1 setup, but I think it’s a wonderful feature to have.

Turtle Beach also piled in a bunch of other great features including its “Superhuman Hearing” that enables you to better hear distant movement and action. That could give you an advantage in a multiplayer battle.

You also get microphone monitoring, which I think is a must-have for successful communication in a game. If you can’t hear your own voice during a loud team fight, it’s easy to stumble over what you’re saying. This solves that without any delay, which can cause its own problems with speaking.

Speaking of the mic, Turtle Beach included a really nice one with the Elite Pro PC Edition. As always, you’ll get better results from a dedicated XLR or even USB microphone, but I think the one that comes with this headset is clear enough for livestreaming as long as you angle it just off center from your mouth. It’ll pop and fizz a lot with direct plosive noises, but you can avoid that by aiming it at your mouth from just below your lower lip.

The amp is still underpowered

The Elite Pro PC Edition has great sound, and you’ll get a lot of that from the included USB amplifier. But don’t think that this is a substitute for a dedicated headphone amp. I plugged the Elite Pro into a headphone amplifier, and it immediately made everything sound bigger and livelier. What stinks is that once you are using another amp, you won’t get mic monitoring or the Superhuman Hearing.

The Elite Pro PC Edition is a great all-in-one kit for people who spend most of their time playing games on Steam. It’s comfy, it sounds great, and it is awesome for communication. You can even swap out its cable to use it with the 3.5mm jack on your phone if you want to take it with you on the go. At $200, it does it all and it does it all well. That is why I can give it a full recommendation.

Turtle Beach provided GamesBeat with a sample unit for the purposes of this review. The Elite Pro PC Edition is out now for $200.