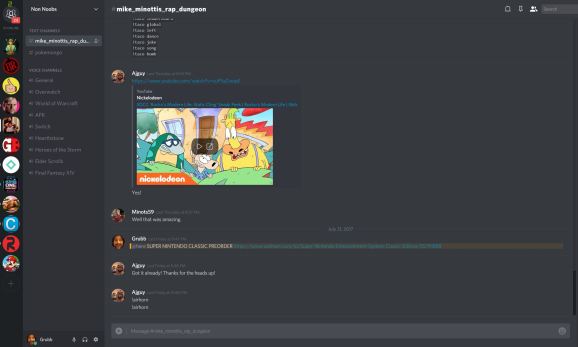 I’m spending more of my time online on Discord, a social network of sorts for small communities of gaming fans. This service combines elements of Reddit, chat rooms, and Skype into a single app, and it has facilitated most of my multiplayer sessions over the last couple of months. And while Discord’s clearly one of the best tools for communication in games, it has become something more than that for me. It’s turning into the place I check before Twitter to talk about games and to see what my friends are up to.

Discord is the latest evolution of a long-running type of third-party app that wants to act as the default service that people go to for voice chat and similar features. We’ve seen programs that focused on voice chat or game-specific communities like Raptr, Player.me, or Razer Comms. People also use services like Skype, Slack, and Hangouts to communicate in games. Discord, however, combines all of those ideas into one app that is free, easy to use, and won’t affect game performance.

One of the big reasons that Discord is embedding itself in my life so deeply is PlayerUnknown’s Battlegrounds. This last-player-standing shooter is great with groups, and Discord’s voice-chat quality makes it easy to hear your squad and even include their audio in a livestream.

Having an active game where a lot of people are always looking for a group to play with has led to me joining a huge number of servers, which is what Discord calls the individual user-created communities. But I think I’m going back to Discord between gaming sessions because of the way the company set up those servers to work.

A Discord server feels like an isolated pocket on the internet that you have some ownership of. It’s like creating one of Reddit’s subreddit forums, except it’s more exclusive. The Discord app doesn’t offer you a bunch of fun communities to join, and it won’t put your server in a master list for other people to jump in. Instead, it’s private and controlled by whoever started the server or whoever has admin rights.

You also don’t need to make the server about a game or a topic. I think that, the exclusivity, and even calling them “severs” (instead of “clans” or something else) gives Discord users a sense of ownership over their tiny communities.

Even in the Discords I don’t personally run, I feel a sense of membership. That combined with playing games with the people in these communities has me returning to share news and interesting links with people based on whatever we talked about during our last match. I’m doing that instead of just posting the links into the void on Twitter or occasionally browsing Reddit.

I’m still doing those other things, but it’s just that Discord has found its way into my personal online social flow. And that’s not something I thought would happen with an app like this. I’ve even subscribed to Discord Nitro for $5 per month. This gets you just a handful of random bonus features like an animated icon, and I’m not sure who exactly it’s for. I probably won’t renew my membership next month, but I’ll still have access to all the features that make Discord crucial to my day-to-day gaming life.