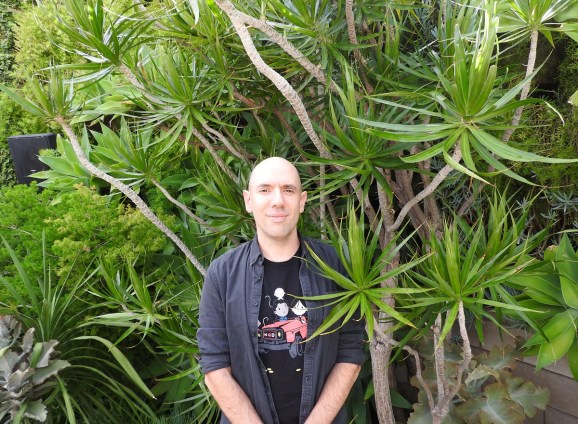 Naughty Dog is pulling a mind trick on its fans with Uncharted: The Lost Legacy. Its heroes are two women who weren’t exactly on the side of good in the previous games in the series.

Nathan Drake hung up his grappling hook at the end of Uncharted 4: A Thief’s End as he finally retired from Sony’s award-winning Uncharted action-adventure series. But developer Naughty Dog isn’t done with the thievery of the Uncharted universe yet, and it is launching Uncharted: The Lost Legacy on PlayStation 4 on August 22.

The game stars Chloe Frazer, a treasure hunter who made her debut in Uncharted 2: Among Thieves, and Nadine Ross, a mercenary who gave Drake a lot of grief in Uncharted 4. While they were sidekicks in the previous games, this title will flesh out the characters in a much bigger way. And so Uncharted, which was often accused of being a copycat of Lara Croft and Tomb Raider, has come full circle to its swaggering female adventurers.

I played a big, open-world style level in the game, and then I interviewed Josh Scherr, the writer of the game, at Sony’s Naughty Dog studio. Clearly, one of his challenges is to create an interesting story and characters that players will love — without making them too familiar to gamers. From what I’ve viewed of the game, the relationship between Frazer and Ross is something we haven’t seen in the series so far. 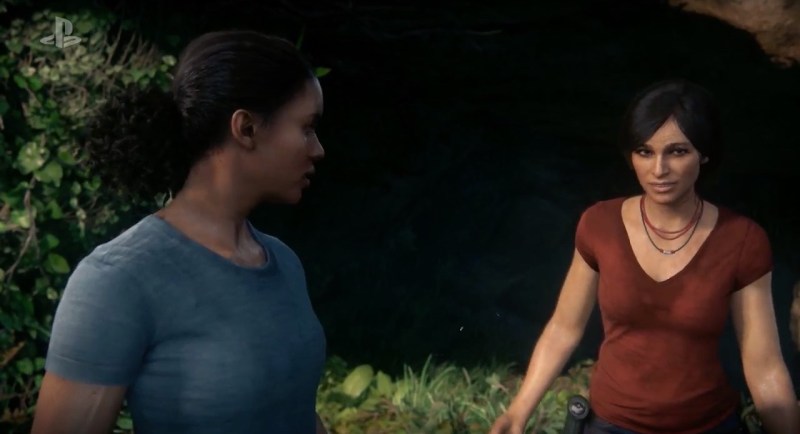 GamesBeat: How were you involved with Uncharted in the past?

Josh Scherr: Uncharted 4 I co-wrote with Neil. Prior to that I’ve been with Naughty Dog for more than 16 years. I started on the first Jak and Daxter. On the first Uncharted I was the cinematics animation lead, but I also worked on story development with Amy and Bruce and Neil. Same with Uncharted 2. With Uncharted 4 I shifted to writing full time.

GamesBeat: So you’re very familiar with these characters.

Scherr: Oh, yeah, familiar with all of them.

GamesBeat: We know a little bit about them, but they’re more like side characters in past games. What are we going to learn about them now that they’re in the lead?

Scherr: Part of the reason we gravitated toward Chloe in the first place – apart from the fact that she was a fan favorite in Uncharted 2 and 3 – she seemed like she had the most potentially interesting backstory out of a lot of the characters. She’s a treasure hunter like Drake, though she’s considered a bit more, say, low-ranking in the field. She’s worked her way up. She’s the best driver in the business. Someone you can call on and rely on.

What was always interesting to us, though, is that unlike Drake, who has a bit of a hero complex, Chloe is more interested in self-preservation, almost pathologically so. To the point where, if the heat starts getting turned up too much, she’s more than willing to bail on her partners and leave them holding the bag. Which is partially what happened in Uncharted 2.

What we thought would be interesting was to team up this person with somebody else who—whenever you have a side character, you want to have someone who’s a good counterpart to their philosophy, or at least somebody who brings that out in them. That’s why we gravitated toward Nadine. Apart from having the distinction of being the only Uncharted antagonist to survive to the end of a game, she’s someone who is very by the book, very tactical, and here she is being forced to work with somebody who likes to fly by the seat of her pants. 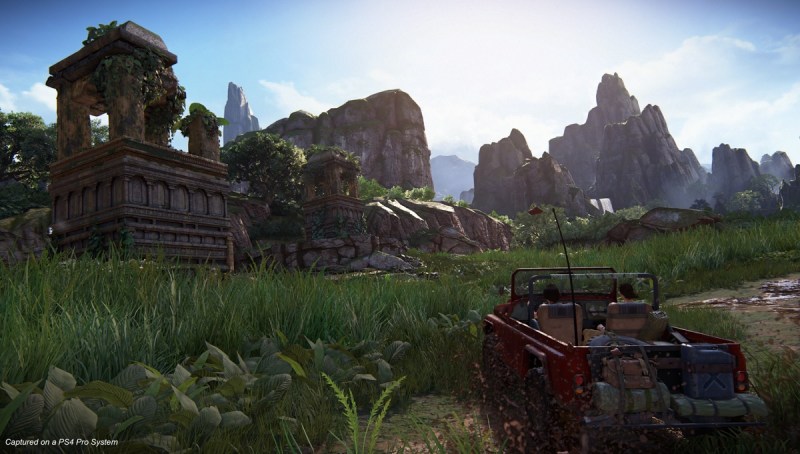 Above: The jeep and its winch are back in Uncharted: The Lost Legacy.

GamesBeat: I remember Chloe being a genuine thief in Uncharted 2. Willing to steal from her allies. But I didn’t remember her being unreliable or traitorous?

Scherr: There’s a scene when they pick up Elena’s wounded cameraman, where Chloe’s like, “We have to get out of here!” Drake says, “No, we’ve gotta save him!” And when they get cornered in a room, Chloe pulls the gun on them as Flynn comes running in. She goes off and sides with Flynn and leaves them in the lurch. She does that at one point later in the game too, on the train. She has that in her.

GamesBeat: What takes us to the story in this game, then?

Scherr: The idea here is that Chloe and Nadine are searching for an Indian artifact called the Golden Tusk of Ganesh, a symbolic treasure created by the Hoysala Empire, which ruled southwestern India from the 10th to 14th centuries. It’s incredibly valuable. Chloe wants it for her own reasons. Nadine wants it for her own reasons. They’re racing against an Indian warmonger, Asav, who has followed the Hoysala society – their ancient kings and their more hardcore beliefs and ways of ruling – and he wants to topple the Indian government to bring that kind of philosophy back. They’re butting heads with each other.

Part of the reason Chloe has hired Nadine to do the job, apart from her military expertise, is that she actually knows Asav and has worked with him in the past. She’s willing to get that kind of situational operating assistance from her.

GamesBeat: Did this start as a smaller story and grow outward in some way?

Scherr: Initially, when we first announced the Uncharted 4 multiplayer back in 2015, we also announced that we’d be doing some more single-player content for the game. We thought it would be something on the scale of Left Behind, a little add-on to the main story. But we realized as we were finishing Uncharted 4 that we were really wrapping up Nathan Drake’s story in a nice neat bow. Anything else to go along with that was going to feel kind of superfluous. Once we realized that, we said, “All right, what other stories do we want to tell? What other characters do we want to explore?”

Now that we were starting from zero with new characters, we needed to have the time to flesh out these honest-to-God character arcs. We weren’t just filling in the blanks of an existing story. It grew to expand into the story we wanted to tell. It started out small, but now it’s a full stand-alone game. Whoops. 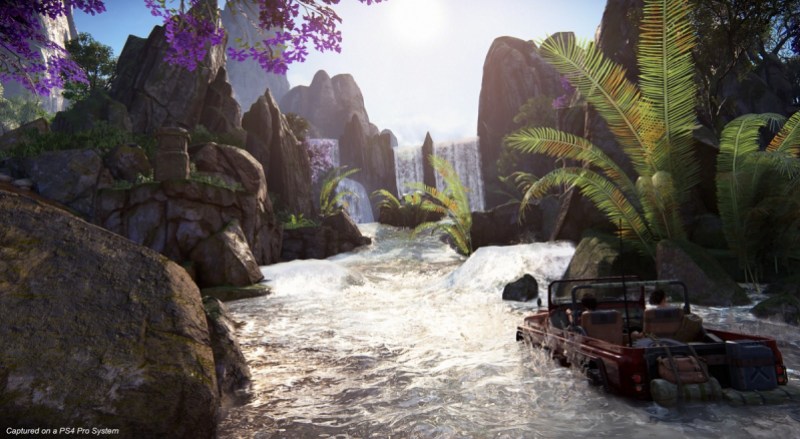 Above: The environments are lush in Uncharted: The Lost Legacy.

GamesBeat: It seems like there’s no end to that particular opportunity, then. You could carry this on as the next Uncharted series.

Scherr: We could. One fun thing about the series, and about the genre in general, is that we’re drawing from the idea of this whole world out there of rogues and thieves and treasure hunters and all these things they do with and against each other. Potentially we could spin this off. But right now we’re just focusing on getting this out the door, and then we’re focusing on Last of Us Part II. There are no plans for anything beyond this.

GamesBeat: Are they just sort of strange bedfellows, along on the same heist?

Scherr: To a certain degree. Like I say, Chloe wanted to do the job, and she realized she couldn’t do it on her own. She knows Asav is in the area. She knows he’s a dangerous character. She decides that she wants to hire Nadine. Now, Nadine, previously, was the commander of a private military company, but after the events of Uncharted 4, she’s now essentially freelancing as a soldier for hire.

GamesBeat: She doesn’t have an army anymore.

Scherr: No. She’s somebody who’s used to being in command, and now she’s being ordered around by this lowlife treasure hunter. It’s an uneasy alliance. But what we’re trying to do with the game is see where the relationship starts out and then where it ends up by the end of the story. Of course it’s going to have some ups and downs. Tracking that throughout the story is one thing that makes it fun.

GamesBeat: I always thought the main characters in Uncharted 4 were the jeep and the winch. [Laughs]

Scherr: Well, they make a return in this one. Any time we make something new, we always try to evolve some of the gameplay from the previous titles. That was partially—we made a brand new stealth system for Uncharted 4, based on feedback and things we wanted to do. Now we’ve carried that over into Lost Legacy, making little tweaks to that. Same with the rope mechanic.

As far as the jeep goes, it still has all the same fun stuff we did in Uncharted 4, but the big difference – it’s in the area we’re demoing today – is the largest free-roaming area we’ve ever made in any of our games. We did some experiments with that in the Madagascar levels and the at-sea levels of Uncharted 4, where you’re piloting around those islands on the boat. We wanted to see what we could do with that in the same kind of environments. You can drive all these places with the jeep. You can run into enemy encounters and choose to engage with them or not. You can find these old structures and forts that maybe contain clues to the Tusk, get out and explore those. Environmental puzzles, all kinds of hidden artifacts.

It’s an experiment of sorts for us, dipping our toe in the waters and seeing what it would be like to do something a bit more free-form. But at the same time we’re still maintaining the consistent story. That was the biggest challenge. No matter what order in which you approach this environment, and you can approach it in a number of different ways, we still have to tell the same character arc without making it feel weirdly inconsistent. 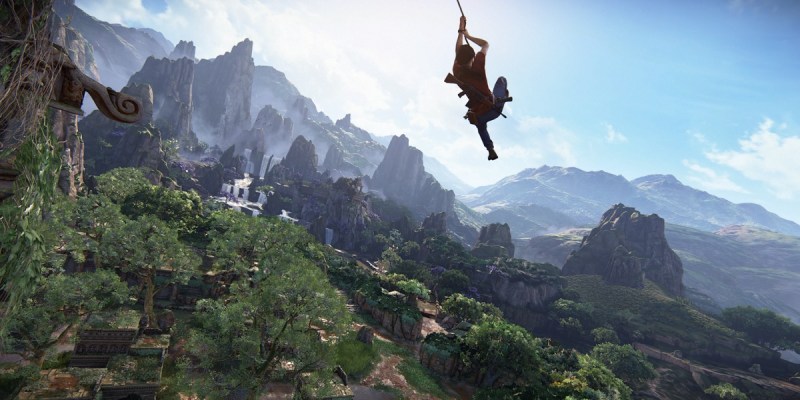 GamesBeat: I think of the inanimate things in these games as characters, like the armored car in the last game. Do you have anything similar along those lines in this one?

Scherr: You saw the E3 demo, so the armored car makes a comeback. It’s done great work for us in the past. We love bringing it back.

GamesBeat: Does it bring more depth to the story now that it revolves around these two characters?

Scherr: I think so. What’s interesting about this is, because we have these brand new characters, in a way it’s like wiping the slate clean. We’re welcoming not only people who are fans of the series, who are familiar with the characters, but also people who are new to the series. Hopefully they’ll discover Uncharted this way as well. We’re starting from the ground floor with these two, defining who they are, learning a bit about their backgrounds and how they came to be who they are, and how their pasts have to be reconciled through the events of the story.

GamesBeat: It’s interesting to see women characters coming to the fore here, too.

Scherr: That wasn’t necessarily the consideration when we started, but we’re perfectly happy with the end result. It’s nice, I think, after four Uncharted games with Nathan Drake, seeing new faces carry on the same tradition. Obviously Nathan has a 10-year history that Chloe and Nadine don’t, but they’re both really interesting characters. This allowed us to expand them much more than we could have in the previous games. 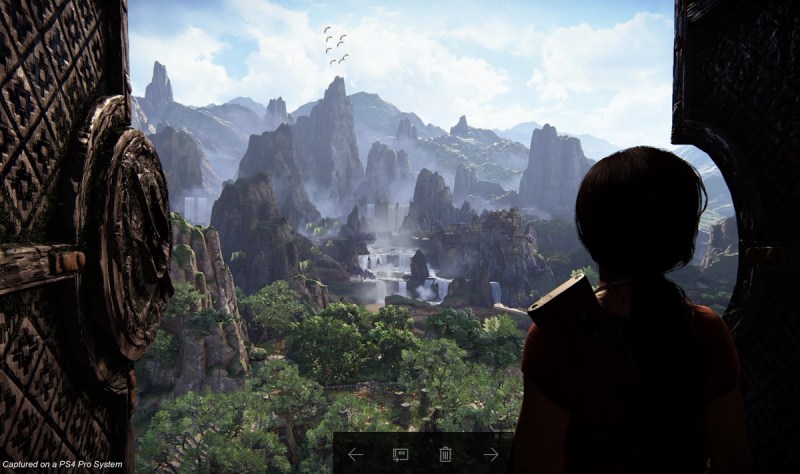 Above: Chloe looks out at Indian fortresses in Uncharted: The Lost Legacy.